Colors as status are difficult and very dependent on the context of the web application and its application. This is just a food for thought.

The contextual consistency helps to avoid confusion (eg using red to indicate that something is stopped, but also that a system is damaged – one situation would be worse than the other but would be visually equivalent to the user) ,

You try to make color mappings with a sequential status (if you specify that something happens one after the other) and note that a step in this process indicates that this status is "good" or "bad" for the user. If this is the case, it may be useful to add some commonly accepted colors, such as green or red, when the sequence is complete. If the sequence does not show "good" or "bad," before using these colors, check that red is used in other aspects of the application to indicate danger to the user.

Additional ideas / hints to the color:

The use of a monochromatic scale can give the user a sense of completeness based on darkness / brightness. However, when comparing colors among each other (eg in a raster), it is more difficult for the user to quickly distinguish color differences. 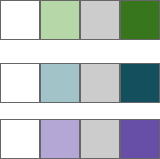 Using two different colors can be useful, as you have two different scenarios in your case. A) an article is not being processed B) status of this progress. The use of gray, which is often used for disabled items, would be useful for "not started yet" and "active but paused" statuses, while another color such as blue (or green) could be used to "active" and Show "Completed".

Many programs use red, green, and yellow in these situations. Personally, I think that is a habit. Green usually means "good" or "ok", yellow is traditionally "danger", but is often used as an intermediate status, and red means that attention is focused on "danger" or "looking here". Often, red can also be used to embarrass users, e.g. B. "Look at what is not done".

ROYGBIV can also be used, but is much better for displaying scales than for a sequence and can often be confused with the traditional red, yellow and green meanings.

There are more neutral colors like gray, blue, pink and purple, but many people avoid and detest pinks and purples.

Other factors to consider are sufficient contrast agents to allow people to read your text (if there is text on the color).
Here are some Web Color Checkers:

Other factors as well as the appearance of the color play a role and are repeated in different forms throughout the application. It may even be a user to only display the sequence to a user and to use a color to indicate where the sequence is located. 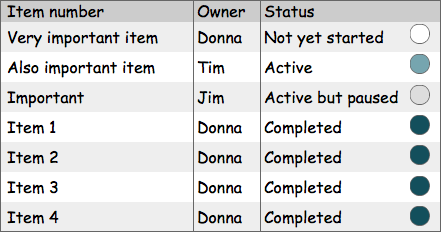 Sorry, if that's too basic. I can not say exactly what "(ass enlargement, just to the text)" means. If you're just trying to change the color of the text, I strongly recommend that you do not use blues as they are usually used for hyperlinks. I can not say if you apply these colors directly to the text. In a list, or apply the color to other text, e.g. For example, a title to be used as an indicator. It is important to note that the sole use of color as an indicator of Internet accessibility standards is a deterrent, as individuals with color sensitivity, such as color blindness, may not be able to capture the indicator by color alone.
http://webaim.org/standards/508/checklist