I installed windows and two Linux distributions on my PC. I use Windows for specific apps, one Linux Ubuntu for other apps and other Ubuntu for internet. The “not booting or working properly linux” Linux few days ago prompted an error: “0 MB disk space left”. This day it even no longer booted properly, saying there is no space for that at all so I am writing this post from the “still booting and working properly linux” Ubuntu.

*After more thorough analysis it turned out, that even thou every single OS is installed on a separate partition with enough disk space somehow – as I browsed the partitions – it turns out that one of the Linuxes has been installed inside the folder created for other Linux:

Other words: “home” folder of the “not booting or working properly linux” is available within the disk space of “working linux”.

I have no idea how did this happen, but I suspect that this is the “culprit”.
Do I have to remove both linux distributions, delete partitions and re-install them again properly or there is some way to fix it without so much work? I was suggested running live USB of linux installation and run gparted from there as I could resize any partition from there, but the one that has no space – sda7 – doesn’t enable me to increase the size: 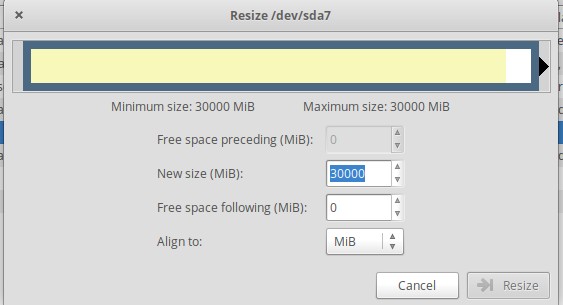