Start with a sphere of radius R, then take the part of the surface that exists between any two lines of latitude. I drew a pic with two examples, one near the equator and one near the pole. 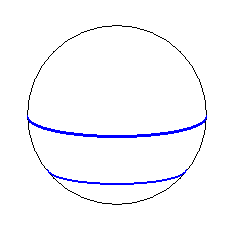 What is the area of this blue section of surface? I don’t know what it’s proper name is, maybe a band or zone.

I did search around for this but I found a site that has a suspicious answer. There, they say it is simply 2piR*h, where h is the altitude between layers.

First of all, I don’t know how to determine altitude except at the equator where I can use a chord function C = 2R*sin(a/2), but you have to use twice the angle there and then take half the chord to get the altitude.

Second of all, I don’t understand how it can be purely based on h and not the cosine of latitude. A band near the pole will wrap around a much smaller part of the sphere. So the position of the band must be taken into account, not just its altitude (aka thickness in the projected cylinder).

So what is a good formula to find the area of a band between two lines of latitude? And if it really is only based on altitude, how and why?