note: the first set of three dots in the title is definitely three separate dots, and the second is one character when I select it during editing. However viewing the posted in Safari both select as a single character.

I sometimes write explicitly three periods in a row “…” in a text field in TextEdit or in Keynote when discussing a bit of code or script, (e.g. X(..., 1) in Python puts a 1 in the last axis of a multidimensional array) and either Keynote or macOS says “Oh, I’m going to change what you typed to something you probably wanted instead” and converts it to X(…, 1)

I would like my laptop to stop doing that, in Keynote and basically anywhere!

“Bonus points” for sharing how to stop it from putting periods at the ends of anything it thinks might be a sentence.

I have found that on a case-by-case basis I can stop and undo what is already done, but I just want to suppress this behavior from the beginning. 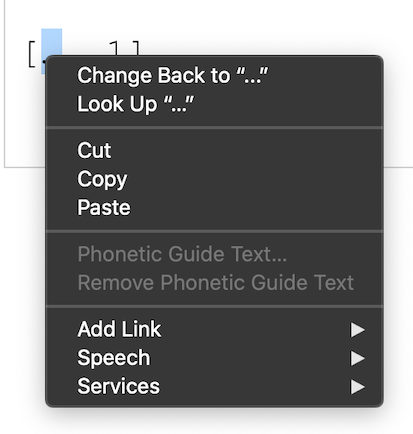