I have a SharePoint 2013 on premise farm that recently started experiencing high CPU usage on the WFE. The server has been locked at 99% for days on end now and the services that are causing it are all workflow related: 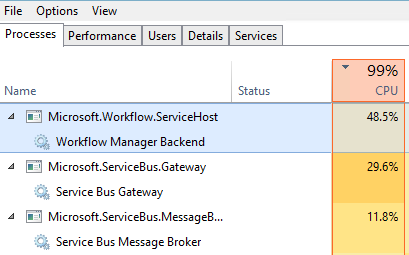 We are not sure what is causing this. We cannot seem to find any workflows that are running off the rails which is the only thing we can think of that would cause this. The workflow farm appears to be in a healthy state and reconfiguring it isn’t really an option at this time as that would terminate all running instances of workflow that our company heavily relies on. Our farm consists of 1 WFE, 1 App server, and 1 Database server. Workflow is configured on the WFE and yes we are aware that this is not best practice.

Here are two events that started getting thrown as soon as the high CPU usage began:

Any insight on this issue would be greatly appreciated.