I’m trying to build a Login/sign-up and dashboard for a project. I want to access the data submitted in the Sign-up webform and show it on User Dashboard (Like Username, Phone Number, Email, Profile Picture, etc).
The task is to automatically show the details in the user’s Dashboard.
Help me Find a Solution or suggest any alternative for this.

Is it possible to remote access an android phone with something like Anydesk, but also answer and make phone calls thru it? Without the phone being on the same city…Cheers

Using python, I can connect to a MS SQL database, but cannot run any queries at all. I always get the error – invalid object name.

I understand from other stack exchanges that I may be accessing the wrong database (although that is specified in my connection); there may be something wrong in my schema (whatever that is); or I simply don’t have permission to run a query (I should have been given read only permissions).

In another database, I can download a table into a pandas dataframe with the following code:

But from the database in question, MyTable is never a valid object name.

We have a gui interface for querying the data, which allows me to see the SQL-code used for the queries. It includes code like:

I’ve a pdf of the tables, with all the table names and columns, but nothing I enter as MyTable is ever valid.

I’ve run a few ideas from Stack Exchanges, like DB_SELECT(), which shows I’m connected to a database ‘master’, but I do not know of other things I can do to isolate my issue. Any further steps to understand my issue would be appreciated.

This question was migrated to Super User because it can be answered by computer enthusiasts and power users.
Migrated 30 mins ago by Rubén♦.


I am trying to log on to a website with my credentials using the Shortcuts App on iOS making several HTTP requests. These requests are encapsulated within blocks called “actions”. The name of this HTTP request action is “Get Contents of URL”. It lets you choose between GET, POST, DELETE etc. and let you set header custom header fields as well.
The only downside: You can not access the response header. Hence, if there’s a “Set-Cookie” in the response header, you can’t store it for later use.

The website is an rwt/rap client, which I have never heard of before. It seems like every interaction on the website (pressing buttons, entering form data) sends a POST with json data structure in the body.
For example, this is the data that’s being sent when leaving the input field for the username after entering it (“myUsername“):

The process to login is the following:

Oh yeah, and every request that I send has a request counter that I increment in the request body’s json.
But for now I am only concentrating on logging in successfully, which contains of the above 5 requests.

Sending them with cURL: No problem. Using the shortcuts action’s http requests I get an error for the one sending the password (No 4): The error is a 403 with the following text "Forbidden You dont have permission to access /path-to-app/pcterminal;jsessionid<32characters> on this server. Additionally, a 500 Internal Server Error error was encountered while tring to use an ErrorDocument to handle the request."

At first I thought that it has to do with cookies, because the requests that I recorded in chrome had a “Set-Cookie” in the response containing the jsessionid and a settingStore. But I dropped the entire “Cookie” field from the request headers when using the cURL commands.
But the error seems to indicate that before I send the 4th request the server has dropped my session somehow.

How else could I debug this and find out the cause of this?

I have an Apache server running in WSL2, and this works fine when I use a browser in Windows (Chrome) to access it via WSL IP address.

As the WSL2 IP address may change, I’ve created the following Powershell script which restarts WSL, grabs the new WSL IP address, restarts the services (Apache and MySQL for the website itself, and also Cron to run “certbot” for SSL certificate renewal), then I set up port forwarding from Windows to the WSL IP for ports 80 and 443, ensure that the Windows Firewall is open for those ports, then update the hosts file for the domain to the new WSL IP address.

I’ve tested the script and it does complete all the tasks correctly. The “hosts” file is updated, the firewall rules are added (this one could just be run once and needn’t be in this “restart server” script, but I’ve bundled all the steps together into this script).

The script shows all the portproxy rules and they are set up as expected (there’s not necessarily a reason for listening on all addresses and then also specifically listening on the Windows LAN IP – this is just paranonia and testing different things, when it wouldn’t work).

And the server itself is up and running, because if I browse to the WSL IP address (or use the domain name, thanks to the hosts entry – using the correct domain name matches the SSL certificate to not have to wave away browser warnings) or “localhost” then the website comes up just fine.

Note that I’ve directly placed portproxy commands in the script for IP 192.168.1.165 to the WSL IP address (which works when used directly), so this portproxy is being explicitly refused (by the firewall? But I’ve added Firewall rules to open those ports, right?).

And if I try to use the public IP address (or real domain name) then the browser just spins until it says “timed out”. Which is interestingly different, as 127.0.0.1 and the LAN IP address are “connection refused” (returning immediately) but this is timing out from no response at all.

The server itself is in the DMZ and the public IP address is NAT’d to the LAN IP address, which is why I’m specifically trying to get that one working, as it should make it publicly accessible.

I did have this server up and running previously – with full public access and all was fine – but the server suffered a power outage, and now I can’t get it to work again.

It’s possible that there was some command or setting I did previously, that wasn’t saved and got lost in the power outage, but I can’t think what it could be.

Any ideas what could be making the LAN IP / 127.0.0.1 fail with “connection refused”, while “localhost” and the WSL2 IP works just fine?

Though 127.0.0.1 is less important, as it’s the LAN IP that needs to be working to get it publicly accessible, because that’s what the NAT sends packets to.

I’m currently working on a way to get access to the content in an in-place archive on a shared mailbox.

We currently have a client who has a former employee’s mailbox converted to a shared mailbox. It was previously on an E3 subscription and had an in-place archive enabled but the license was transferred to a new employee. I can still see on the web portal and via Powershell that the in-place archive is still enabled and present but we are having trouble accessing it online.

Is there any way to access it via OWA or in some other way?

my on-prem SP server farm ran into this weird situation where users are unable to render the sites/pages in one of the web applications when they access it from the Internet (home, using phone browser while on LTE, etc). The same site or pages can be rendered successfully when user connects to organization VPN or while in the office. Other web applications are fine and only this one started to act up few days ago. The main site collection has some custom web part loaded so I created a new site collection just to test if a clean site collection can be loaded/rendered and it’s still the same.

I have one computer renders the site while on VPN (which works) and another computer to render the site while just on the home internet just to see if I can pin point what the issue may be, and the only difference is that the successful site loading would show the usual Request (GET:https://xxxx…) while the unsuccessful site request has this high messages followed by some “Dirtied” message:

I am not sure what they do and if they are the culprit for the issue, or if I’m looking at the right place to find the root cause. Would love to hear expert’s feedback on this or direct me to the right direction.

Our environment is On-Prem 2019 Standard.

EDIT: Just to add one user took a screenshot with the error using different browser. Sometimes IE would load surprisingly. 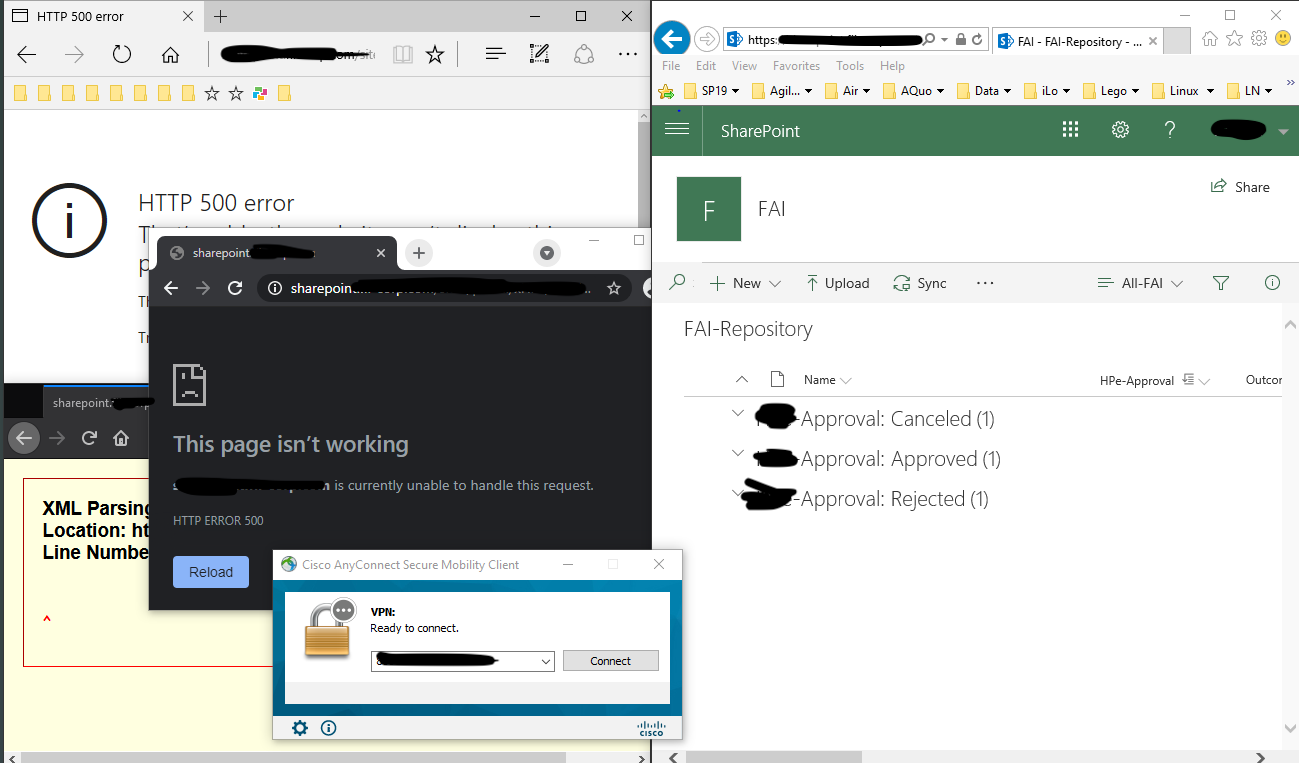 When I go to http://mysite/jsonapi/node/article/dfe90ec0-cd36-415c-bc36-ccc0ce6921f4, Firefox pops up saying I’m trying to open a ‘application/vnd.api+json’ and it wants to download it.

Why can’t I see the JSON in browser, the same way as with the core REST module?

At the same time, we are also looking to upgrade our systems to use OIDC. The users will send HTTP requests with access tokens to the the microservice APIs which will validate the tokens with an authorization server.

Provided the user is authorized to access the API we will need to check the fine grained permissions. Should we authorize to the fine-grained user permission webservice using the access token provided by the user to the microservice, or should our microservices have their own set of client credentials to check the fine grained authorization service?

I have some website in Docker containers running on my NAS and exposed to the outside world via port forwarding. I thought that is rather save, because even if the container gets hacked, no big deal. But I noticed that when I get access to my docker containers, I am basically inside my local network. I can then use different less secure ports on my computers or NAS, which I purposely have not exposed to the outside world.

Is there a way to prevent my docker containers from accessing my local network?

Preferably a solution with onboard tools from Synology DSM or Docker.