I have had this Pixel C for about 3 years, possibly more.

Two days ago it stopped responding to the unlock pattern. This seems to be a fairly irregular thing on Google devices and never fixed. The recommended course of action is to do a factory reset.

However when I start the device with volume down and power the only options I see are:

How do I debrick my tablet?

A typical creature, on their turn “can move a distance up to (their) speed and take one action”. By default, they don’t get a bonus action; those are usually granted by class features, spells, etc..

Various class features, spells, and other abilities let you take an additional action on your turn called a bonus action. … You can take a bonus action only when a … feature of the game states that you can do something as a bonus action.

The Hound’s description doesn’t specifically preclude their taking bonus actions, so they would be able to were a spell to grant one (note, though, that Expeditious Retreat has a target of “self”, so getting it cast on the Hound might be tricky).

So, what can the Hound do on their turn? They can move, and they can use their action to attack. What does that mean?

Clearly, then, they can try to bite their target (as per the dire wolf on which they’re based). But, can they grapple or shove? Yes!

Making an Attack calls out those two options:

When you want to grab a creature or wrestle with it, you can use the Attack action to make a special melee attack, a grapple.

Using the Attack action, you can make a special melee attack to shove a creature, either to knock it prone or push it away from you.

In both cases, the key bit is that they “make a … melee attack”. Since the Hound of Ill Omen can use their action to attack and both grappling and shoving are types of attacks, the Hound can do so.

Expanding on that a bit, there are a few actions one can take on their turn; the ones called out in the SRD are:

On its turn, (the Hound of Ill Omen) … can use its action only to attack its target.

thus, it is prohibited from, say, taking the Ready action or attempting to Hide. They are similarly precluded from Dashing as their action. But, since grappling and shoving are both attacks, they’re welcome to do either if they so desire (and the other requirements are missed, eg., that the target isn’t too large).

I will note that grappling specifically “(uses) at least one free hand…”; this GM would generally allow a creature with a free appendage (including a wolf’s mouth) to grapple but, RAW, there’s room to say that a Hound can’t grapple because they don’t have a hand.

You cannot take a bonus action while an attack is resolving. The structure of attack is:

Rolling the damage is an integral part of one attack. You cannot wait until the attack is declared hit/miss before committing your bonus action to improve the damage. You must do so before the attack.

You, however, can use Kensei’s Shot after the attack resolves. If you have Extra Attack, you can then utilize the bonus damage on your subsequent attacks.

I am trying to create a shortcut on iPhone which will convert my photos from *.heic to *.jpeg and then send it on WhatsApp as a photo. Below is the screenshot of my shortcut. 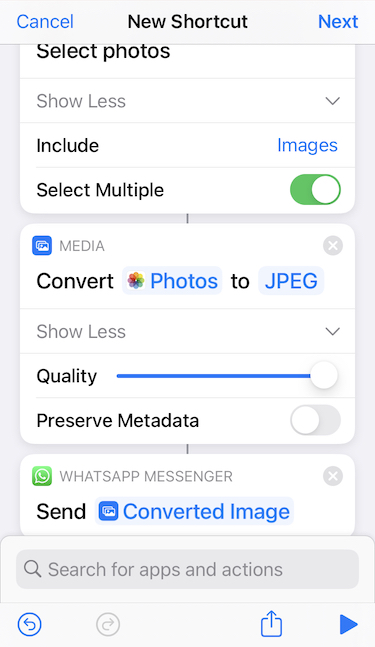 But the shortcut does not work. It shows selection of Photos from my phone, but does not show up WhatsApp with photos to send to recipients. What am I missing here?

…On its turn, (the Hound of Ill Omen) can move only toward its target by the most direct route,
and it can use its action only to attack its target.” (XGE p. 51)

So the hound is limited to using its action to attack its target. But does “attacking its target” specifically mean taking the Attack action to make an attack roll, or are their other things that qualify as an attack?

For example, could the hound use the Attack action to attempt to shove or grapple a creature? Or, stretching it a bit further, could they take an action (that is not the Attack action) to attempt to damage their target; (for example using the special action granted by the Dragon’s Breath spell) or if attack were impossible given the hound and the target’s positions taking the Dash action to be able to make a future attack possible?

Furthermore, would a hound be free to use its bonus action however it wants? For example, if Expeditious Retreat were cast on the hound, could it use the Dash action as a bonus action even though it is not attacking the target?

Thank you in advance for any answers I might receive.

I am new to Game Dev and I am following a Tutorial. Within this tutorial, we create a quest system, that allows you to accept or decline a quest. This tutorial is based on Unity 5 and I am using 2020.1 so there could be version differences that could be causing the issue.

I have a script called:

When I run the game and press the Accept Button…the game seems to not function after that and is stuck on that screen, with the button highlighted…not even the Debug.Log text is printed in the console.

Any help is greatly appreciated before I give it up and look for a more updated version to learn on.

It doesn’t “reset” anything, but rules as written, you can take an extra attack as part of each Attack action taken as part of that turn.

The wording “if you take the Attack action on that turn” does not include any restrictions that would prevent you from doing so more than once on that turn, if you have a way to do so. So you could use Action Surge to take two Attack actions on your first turn, and gain the Dread Ambusher benefit on both.

There are very few ways to get additional actions, but while the haste spell specifically rules this out (as using its extra action for the Attack action is specifically limited to “one attack only”) that is not a universal rule for extra actions (and mostly necessary because haste lasts multiple turns). I think this clever combo works under rules as intended (and certainly rules as fun), and will be fine at most tables.

As a comparison, this combo doesn’t grant access to extra attacks any faster than a single-classed fighter or ranger, since it requires ranger 3/fighter 2. A fifth level single-classed fighter has Extra Attack every turn and can use Action Surge whenever they like during the fight to get four attacks in one turn. The multi-classed Gloom Stalker can only do this on the first turn of combat, though they also get the speed boost.

After two or three more levels (depending if they progress as a fighter or ranger) the multi-classed character will gain Extra Attack and can thus make up to six attacks in that first round by level 7 or 8, which is a few levels earlier than a fighter gets their upgrade to Extra Attack at level 11. But they’ve paid for it by delaying ability score bonuses, spellcasting progression and other features, so this seems pretty reasonable to me.

A spell cast with a bonus action is especially swift. You must use a bonus action on your turn to cast the spell, provided that you haven’t already taken a bonus action this turn. You can’t cast another spell during the same turn, except for a cantrip with a casting time of 1 action.

This would ordinarily prevent you from casting a levelled spell and a bonus action spell on the same turn; however, the Artificer’s Spell-Storing Item states:

(…) While holding the object, a creature can take an action to produce the spell’s effect from it, using your spellcasting ability modifier. (…)

(…) The user never casts the spell either. They merely use a (special, unnamed) action to produce the spell’s effects. They don’t cast it and don’t get to modify it with their features which care about them casting a spell. (…)

And the Sage Advice Compendium even states (page 3):

Q. Which action is used to activate a Spell-Storing Item?

A. Activating a Spell-Storing Item uses the Use an Object action.

Does this mean that a caster could use a Spell-Storing Item, creating the effects of any 1st or 2nd level Artificer spell with a casting time of 1 action, and then use their bonus action to cast any (bonus action) spell?