Given an alphabet ${0,1}$ and $n in mathbb{N}$, how would one go about constructing an acyclic deterministic finite state automaton with the maximum number of states over the words ${0,1}^n$? Thanks


The tree is an acyclic binary tree. It’s composed of node objects that have a list of connections to link objects (at most 3), and link objects that have a list of connections to node objects (always 2). I am trying to construct a list of possible paths to other nodes that can be reached given a fuel budget and a fuel cost on each link. What it is supposed to do is go through each non-backtracking connection of a node, and spawn a new route and thread to investigate that, leaving the current one to end at that node and thus create a list of routes to every node in the reachable area. When executed, the list of end destinations are valid but many of the paths that are constructed to get to them are wrong, going down other branches in the tree that are extraneous or entirely outside of the reachable area bounded by the fuel budget as well as jumping between nodes that aren’t directly connected. There seems to be some pattern in the errors, when going down from the root of some branches of the tree the path goes down every offshoot in order first instead of going in a straight line, and when going up the tree the path tends to go further out and make triangle shapes, often landing somewhere other than the listed destination. I have already checked the link and node connections themselves to see if they are assigned properly, and they are. What am I getting wrong?

Given an undirected graph with some cycles: 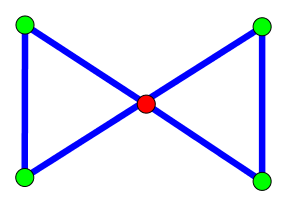 we can “disconnect” the red vertex by adding a separate vertex to each of the edges adjacent to it: 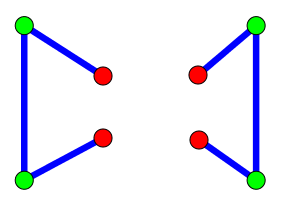 In this case, disconnecting a single vertex makes the graph acyclic.

(I found some related concepts, but they are different:

This may belong in stackoverflow, but since I’m hoping that the answer is some plugin, I’m asking here first.

Google Sheets doesn’t have the “show dependencies” that excel does. I’m trying to track down what is slowing my spreadsheet, which for changes in certain cells takes close to a minute to update.

A program that looked at a sheet file and translated it into python or perl might work. A program that extracted and creaated a topological tree of the DAG would work.

Let $A_bullet to B_bullet$ be a quasi-isomorphism of simplicial rings in the sense of (P.62, I.3.1.7, Complexe Cotangent et Déformations I, Luc Illusie).

My question is whether it follows that $Omega^1_{B_bullet/A_bullet}$ is acyclic (i.e. quasi-isomorphic to the zero module) from these assumptions.

The broader context is when I am trying to show that the cotangent complex is independent of the free resolution taken.

Suppose we are given an algebra $R to S$ which has two free simplicial resolutions $P_bullet to Q_bullet$ (i.e. they are quasi-isomorphic to $S$, and $P_n$ and $Q_n$ are free $R$-algebras).

So it suffices to show that $Omega_{Q_bullet/P_bullet}$ is acyclic, which is what I asked above.

We are given a directed network $G=(V,E)$ with capacity $c(e)$ on edge $ein E$, and a feasible $s$–$t$ flow $f:Erightarrow mathbb R^+$. A flow $f$ is acyclic if the subgraph of directed edges with positive flow contains no directed cycles.

I have an edge coloring problem as follows:
Suppose we have a DAG which has a source vertex s and an end vertex e, in addition, all the paths from s to e are of the same length say L. We define L colors from 1 to L. Is there an efficient edge coloring algorithm to color all the edges, such that every path from s to e uses all the L colors and every path must be labeled differently? I attach a picture below for illustration, where vertex 1 is s, vertex 10 is e. 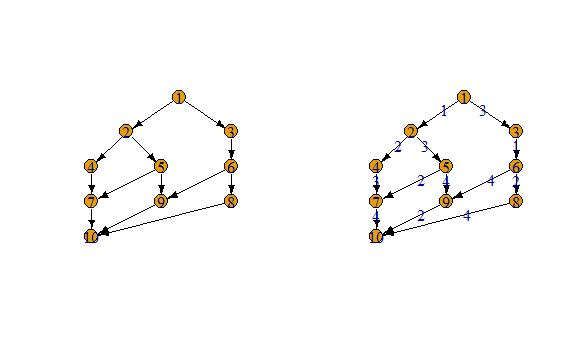 I’m trying to understand how vector clocks compare to DAGs for causality detection in a distributed system.

When trying to detect causality relations in a distributed system, a very commonly proposed technique is the use vector clocks. Vector clocks are presented as:

Timestamping is a common method of totally ordering events in concurrent programs. However, for applications requiring access to the global state, a total ordering is inappropriate. This paper presents algorithms for timestamping events in both synchronous and asynchronous message-passing programs that allow for access to the partial ordering inherent in a parallel system. The algorithms do not change the communications graph or require a central timestamp issuing authority.

Another less mentioned but nonetheless ubiquitous method is to synchronize a directed acyclic graph (DAG) between the replicas. I understand the “reachability” notion of DAGs allows to define a partial order between events. To my understanding, this is Git’s approach to determining if a commit took place before, after, or at the same time as another.

I’ve seen little to no discussion opposing vector clocks to full DAG modeling. Unless I missed anything I think those are techniques that both could be used to do an event partial ordering in a distributed system. Trying to understand what unifies or separates vector clocks and DAGs, I’ve come to the following conclusion so far:

Is this it, or am I missing an important concept?

I have a problem where I can easily construct a set of deterministic acyclic finite state automata (DAFSA) and I need a full-text search index, e.g. a suffix tree, over all the words encoded by these automata.