Skip to content
The bounty expires in 7 days. Answers to this question are eligible for a +50 reputation bounty.
Michael Lai♦ wants to draw more attention to this question.


It seems that the nature progression of the scope that is being covered by the HCI/UX design discipline has extended to “Human Experience Design”, which appears to be encompassing not just experiences for users of an application or customer of a company’s products and services but for all of humanity (as the term seems to imply).

The popularization of Service Design as a specialization involved broadening the lens of the UX scope from users interacting with an application to customers engaging with all of the company’s products and services. It also involves understanding the underlying support processes and systems and requires putting on the business analyst’s hat.

My guess is that Human Experience Design would involve investigating some of experiences that are not confined to the commercial or organisational environment, as suggested by some of the definitions provided.

Human experience looks beyond commercial needs to understand and meet
human desires such as freedom, identity and creation.

However, this does not feel like it would involve new skills or processes, but may require more focus on issues such as inclusiveness and diversity in design, accessibility, AI, IoT and other emergent technologies.

What are the skills and processes (and artifacts?) associated with Human Experience Design specifically and not found in SD, CX or UX design?

WordPress Development Stack Exchange is a question and answer site for WordPress developers and administrators. It only takes a minute to sign up.


Want to improve this question? Update the question so it’s on-topic for WordPress Development Stack Exchange.

I need to customize the “add to cart” buttons offered on my website.

Here is the desired scenario.

Are there any plugins, code snippets, or other ways of achieving something like this?

Shawon is a new contributor to this site. Take care in asking for clarification, commenting, and answering.
Check out our Code of Conduct.

dnd 5e – Can the Dread Helm make additional eyes (not the wearer’s) that are attached to it glow red as well? – Role-playing Games Stack Exchange

Role-playing Games Stack Exchange is a question and answer site for gamemasters and players of tabletop, paper-and-pencil role-playing games. It only takes a minute to sign up.

The description of the dread helm says (Xanathar’s Guide to Everything, p. 137):

This fearsome steel helm makes your eyes glow red while you wear it.

I am currently playing a character that ritually cuts out the eyes of enemies we kill. Our group had the idea of what would happen if he started attaching those eyes to the dread helm he’s wearing.

If additional eyes were attached to the dread helm, would it make those glow red as well? Or only the wearer’s own eyes?

The helm makes your eyes glow; somebody else’s eyes are not your eyes

Strictly speaking, whether or not somebody else’s eyes that you’ve effectively stolen count as your own eyes is going to be up to the GM. But I believe the extreme majority of people would interpret this as meaning your very own eyes; the ones that are (hopefully) inside your own head.

However, if I were the GM I would rule that all of them turn red because that is just plain cool and it is the type of fun and primarily cosmetic change that I encourage my players to seek out.

Only the eyes in your body count

Whether additional eyes glow depends on how you interpret “your” in the sentence.

DnD was written using common language. Most people when they read “makes your eyes glow red while you wear it” wouldn’t think that it could be used for interplanar communication. If the helm was intended to refer to eyes that belong to you in a capitalistic sense then it would have said so clearly. Since it didn’t we can understand that “your eyes” only refers to your bodily eyes.

With common language things only do what they obviously say they do.


I have a lot of small companies as customers with only one main server and e.g. some NAS for backup purposes. Those servers have plenty of CPU cores and RAM to be used for everything those companies need, like hosting some small VMs, their industry specific applications with MS SQL Server most likely and sharing some files. Some of those companies use Active Directory as well, which disables write caches at least on those drives it uses to store its own data on and which it does seem to do on every restart of the system.

Those companies simply can’t afford additional servers to host AD only and there’s not too much load on the AD itself as well. Though, some hosted services do perform better with enabled write-caches. So which workarounds exist to better fit all those different use cases on one and the same system?

From my understanding, AD only disables write-caches on the concrete drives it uses itself to store its data. Is that really correct or does it maintain some global config instead? If it maintains per drive only, one could simply work with multiple of those and put different services on different drives.

Though, it seems to be important to really have multiple different drives, as write-caching is maintained per drive instead of e.g. per partition.

According to some sources, HyperV doesn’t cache I/O:

Hyper-V host does not cache VM-to-VHDX I/O… Very easy to check with a FileMon or similar tools @ file system level: FILE_FLAG_NO_BUFFERING and FILE_FLAG_WRITE_THROUGH are both set. SCSI CBDs traveling down the storage stack (if you’ll use SCSI bus analyzer like busTRACE) below will have FUA (Force Unit Access) flag set in a write commands as well.

Doesn’t this mean that cache for some drive hosting such a VM can be enabled in the host and because of HyperV, AD-traffic is still forwarded uncached? In theory this would be some app-level config because of how HyperV behaves and not necessarily negatively impact other services on the same host and drive.

Official docs by MS seem to go into the same direction:

If the virtual hosting environment software correctly supports a SCSI-emulation mode that supports forced unit access (FUA), unbuffered writes performed by Active Directory in this environment are passed to the host OS. If FUA isn’t supported, you must manually disable the write cache on all volumes of the guest OS that host:

One of my customers uses a server containing a RAID-controller which supports using SSDs as transparent cache for different logical devices maintained by that RAID-controller. That controller even has a BBU. In theory those SSDs should handle especially random I/O better than HDDs, but in the end it’s exactly that kind of cache that is disabled on drive level in Windows by purpose. I’m not even sure how many written data can be cached that way without data loss with the capacity of the BBU.

Does such a setup make sense regarding data safety compared to performance or is it only a workaround to make Windows believe to have disabled write-caching while actually using it under the hood?

Not being a workaround in strict sense, but I have one customer with installed AD who currently doesn’t even know why AD is installed. There are no corresponding users, people sign in locally on their client-PCs and stuff like that. It might have simply been installed as part of some default installation of Windows or just for future use or alike and might be as easily disabled then.

Please how can I submit additional documents to UK embassy for my visit visa. I have done the self service upload and submitted. My appointment is in few days time. I just got more documents from my HR to support my freelancer employment after submitting

This question is inspired by considering minor homebrew improvements to the Champion subclass, which is frequently but not universally considered a weak subclass.

Looking at the class features, the following occurred to me about Additional Fighting Style (level 10):

So Additional Fighting Style by itself seems pretty weak compared to the level 10 features of other fighter subclasses. Hence the question.

I have Xpenology running using Proxmox and recently the 1TB storage capacity is almost used up, so I resized the 1TB disk to 2TB using Proxmox.

After restarting Xpenology, even though the 1 TB is now detected as a 1.9 TB disk (as shown in screenshot below), 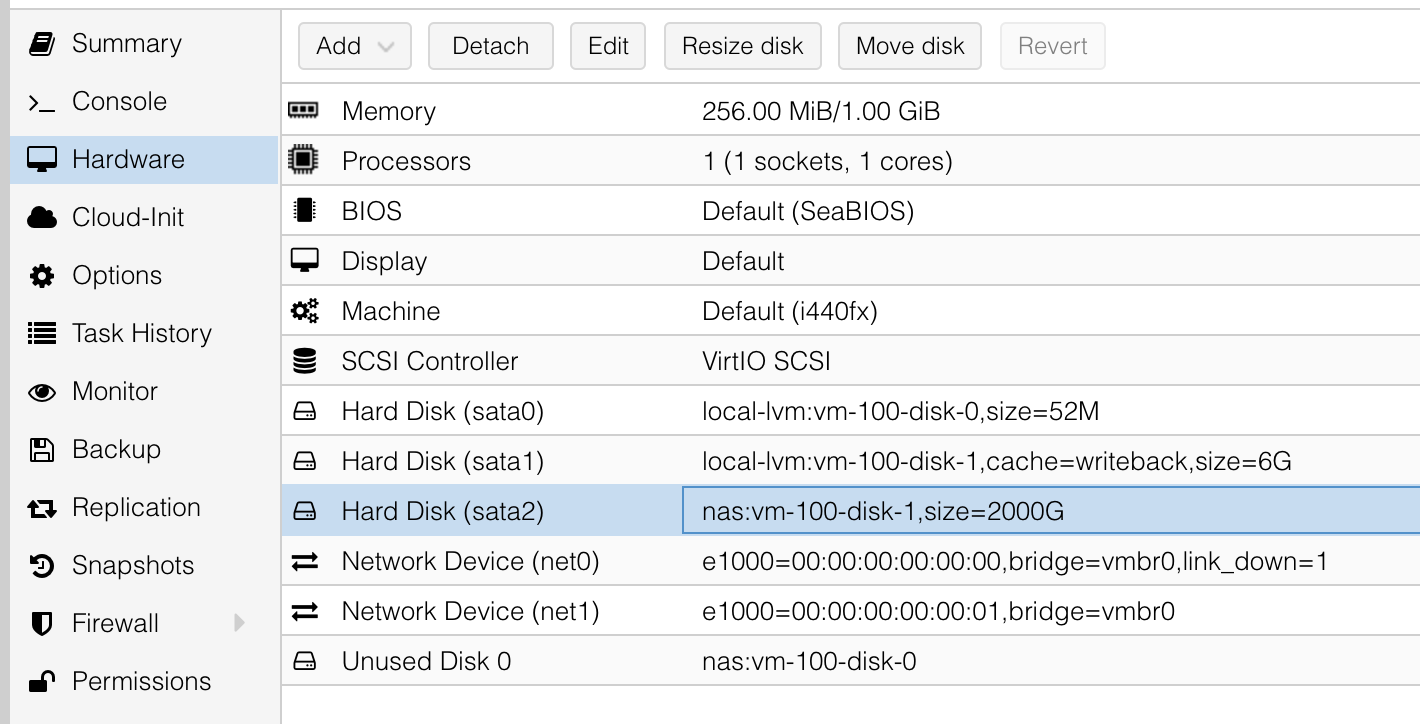 the volume is still 1 TB in size (image below) and I am unable to modify the allocated volume size to 2 TB (image below). 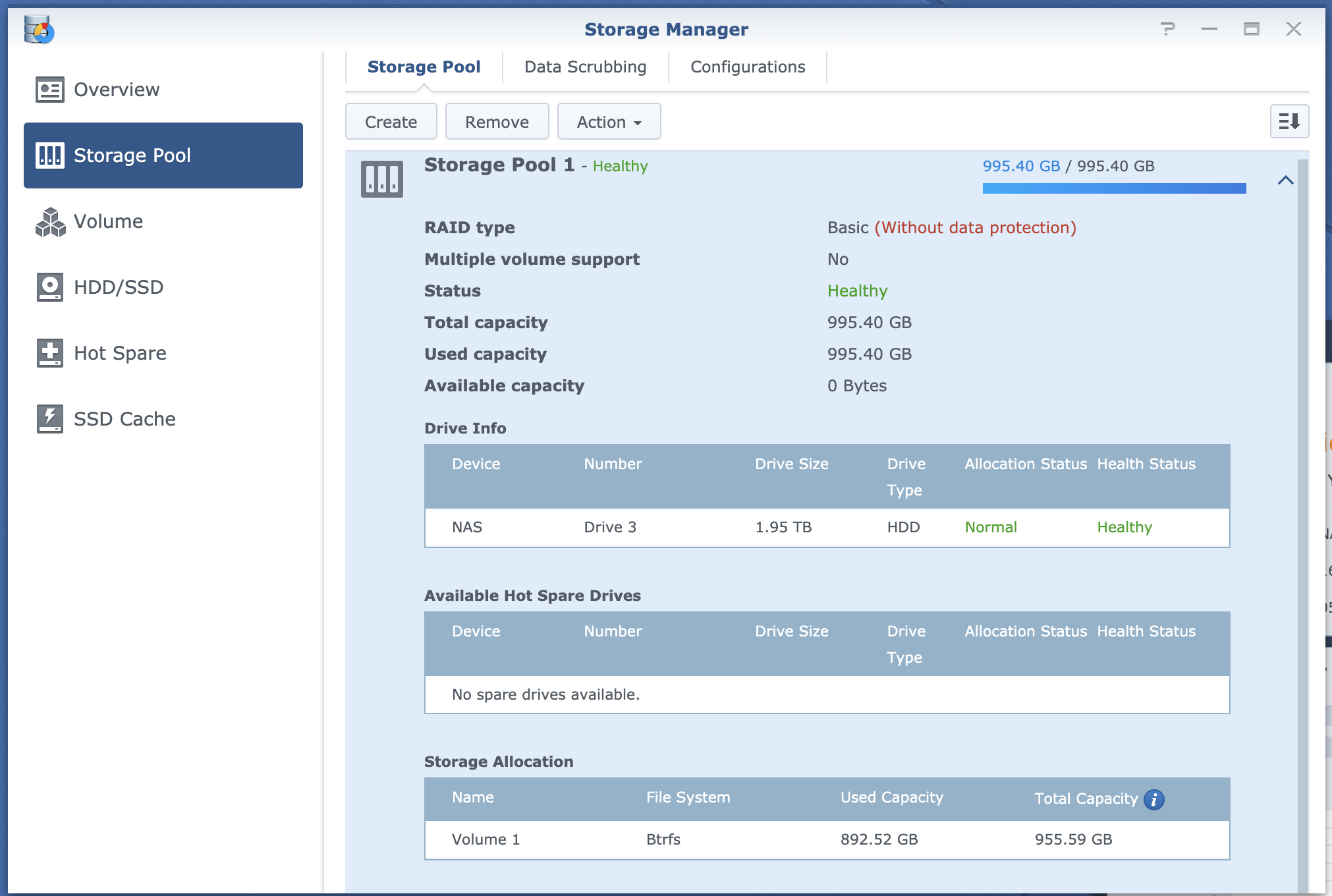 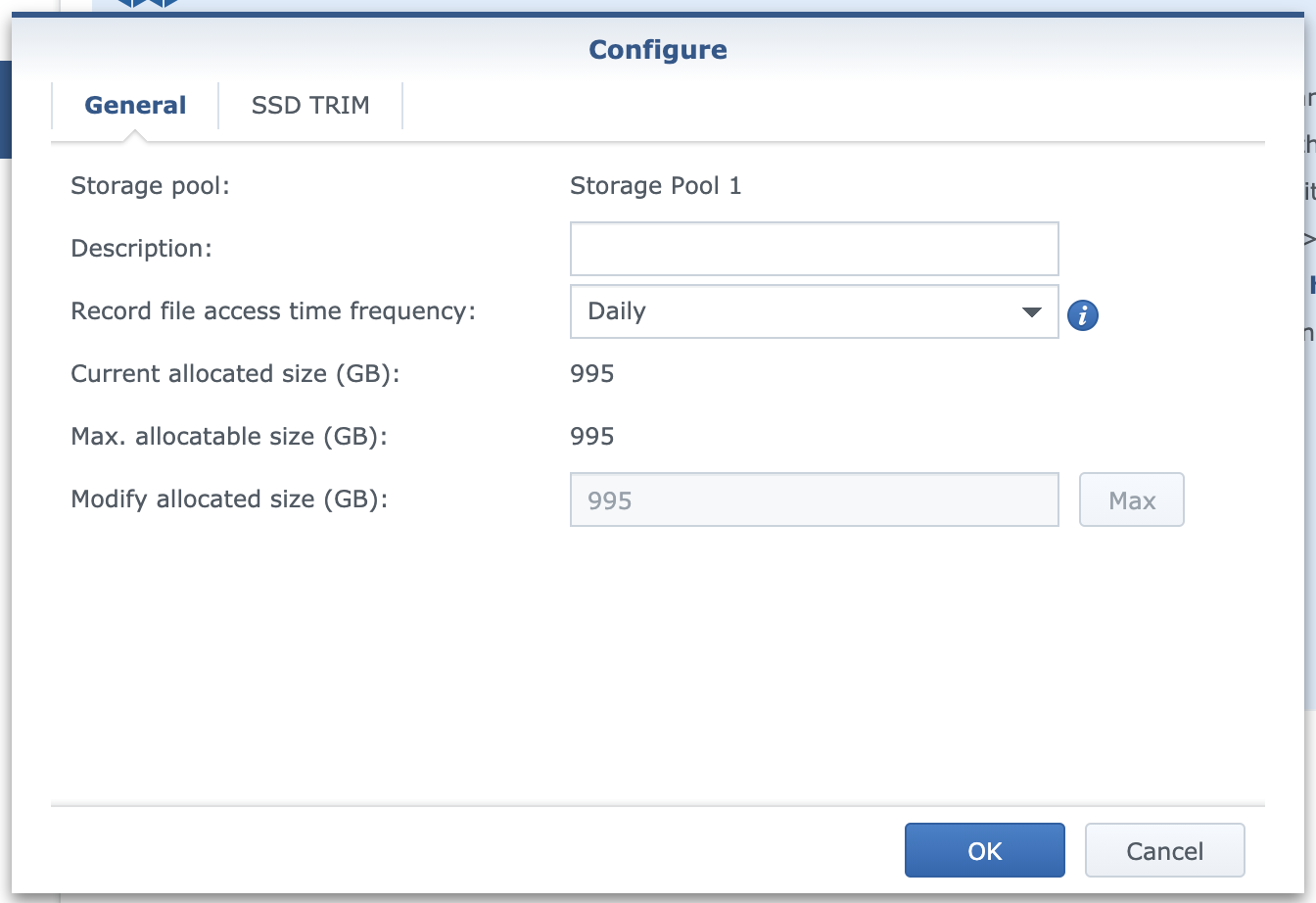 Question: How can we increase the space usable by Synology/Xpenology from 1 TB to 2 TB?

According to the documentation of boost::sort (https://www.boost.org/doc/libs/1_75_0/libs/sort/doc/html/index.html) all algorithms uses “additional memory“.

I couldn’t find any information on how this memory is allocated in the documentation.

Does anyone know if it is heap-allocated during each sort operation, is it stack-space, or does boost::sort utilize some static internal memory buffer (like std::stable_sort)?

If heap-allocated, is it possible to pass a pre-allocated buffer to the sort operations in order to gain control over memory allocations?

In D7 I have two new node type defined e.g. branch and leaf. The branch is a collection of leaves that I’m referring to using the entity_reference module. In the picture below the leaves are the nodes representing the colors. The leaves could be re-used in several branches.

Here is a picture of my collection 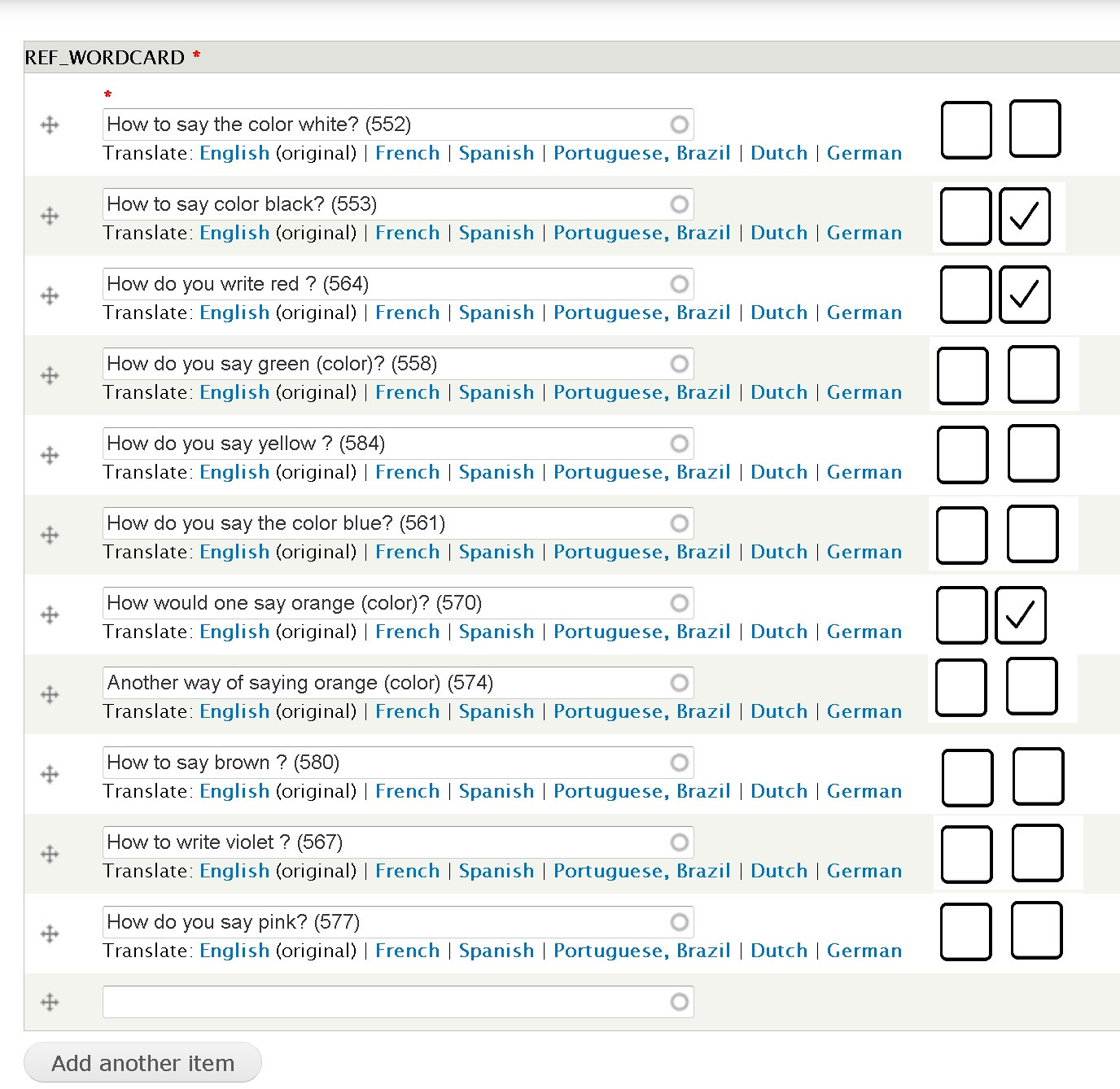 I would like to add for each of the referenced leaves, two checkboxes to add some information about that leaf that is referenced in that branch. I have added on the picture manually the checkboxes. This is what I would like to achieve. Then, programmatically when I read the branch and all its leaves, I want to be able to retrieve the checkboxes value as well. Everything is working far, I just need to know how to add the leaves, so that at edit time when I edit a branch I can tick the checkboxes as needed.

How could I do that? If there is no module that exists, which hooks should I use for adding this fields to the referred leaf node in the branch?
I do not want to add new fields for the leaf node type, I need the new fields/chekboxes to be added to a branch for each leaf thus at the moment of referring to the leaf and for each leaf.

I have a custom views filter extending DrupaluserPluginviewsfilterName that I am trying to add an additional form element to. The existing filter is an autocomplete field that I need to add a checkbox element to. I’ve tried updating ::valueForm to have:

Which is throwing the error:

It seems to be related to the form state, but I am having trouble figuring out exactly what is missing.