I am recently trying to experiment with types of photography that I have not done much before before. One of these is photographing subjects that are moving towards or away from me. But I have experimented with all the different focus modes (AF-S, AF-C, AF-A as well as single-point AF, Dynamic-area AF, 3D tracking, and auto-area AF). But I am unable to take the shot when the subject is moving towards me. What I see happen in every possible mode combination is that when I press the shutter it instead stops focusing and refuses to take the picture at all and then the subject just goes out of focus! I have tried pressing the shutter halfway and hold it so that it will automatically continue focusing, and I have tried letting off the shutting and only pressing down when I am ready to take the picture. In the latter case if I am really quick I can get off a single shot if I am lucky, but I am in continuous release mode and it does not continue to track focus and fire more than one shot.

If the subject is moving slow enough relative to my zoom setting that they are not moving out of focus very fast then I do not see this issue. I need a lot of zoom to bring the subject close enough, but there is plenty of light (for example, 1/1000s, f6.3, iso 220, 270mm zoom) But I do not have any control over how fast the subject is moving, so it’s more blind luck and I wind up missing shots I feel like my camera should have taken.

Am I doing something wrong? Is this an issue with my camera? The lens? It’s really old (9 years) but I feel like it has always had trouble focusing on fast moving scenes, it’s just that I rarely did such photography before. But I have always noticed that in for instance AF-C the lens does this little periodic click clack at times when continuously focusing, so maybe this model is just not good at this?

I've read the autofocus manual for this camera twice so I don't look like an idiot here … but I'm still having trouble autofocusing with my Fuji 35mm 1.4 on a Fuji X-T20. I used autofocus on my other Fuji lens and it worked great. But it just doesn't work? I have set the front dial to C. This is the only setting I ever need for AF. I use MF 95% of the time. I don't get a green focus indicator and nothing snaps into place. When I turn PRE-AF on the lens, it sounds like gravel and slowly focuses on my hand at a reasonable distance after about 6 seconds. Otherwise, I see no indication that this camera focuses on anything in this mode. If you are not in PRE-AF mode, nothing will be focused, nothing will be locked, no green indicator. Am I missing an environment here? I swear I played with everyone.

By good autofocus I mean a stable focus in up to 3 seconds.

By compact cameras I mean the SX Canon, for example.

And I am interested in a measurable criterion (preferably in lux).

The lens is tilted and / or shifted.

Sometimes such effects are desirable, such as this image called tilt-shift photography.

Since this is a very cheap phone and not an interchangeable lens camera, a repair would likely cost more than the phone's value.

Solution: Get a new camera, either a phone if your boat floats through it, or a better camera.

If I repeat the above exercise 20-25 times, the focus may be saved 1 time well and I can take a good picture. The same happens regardless of scene, object or lighting conditions.

I tried two different Nikon lenses that focus well on my other camera. Even the D5500's View Finder works fine. The problem only occurs during live view.

I tried to clean the contacts, the sensor looks clean too. The camera is also equipped with the latest firmware, the battery is full. The picture quality is (otherwise) great.

No guarantee, I bought a used camera. I was wondering if I could fix it.

I have a Canon M6 Mark II camera and recently bought an Elgato Cam Link so I can use it as a very high quality webcam during social distance. I got it working fairly quickly, but even with a "clean" HDMI output, the autofocus rectangle still appears regardless of the focus setting. I would prefer autofocus, but can live with manual focus, but even if MF is set, the rectangle is still displayed.

I tried the following (with result):

This is frustrating because there is nothing "clean" about the display of the AF rectangle IMO. This usage was not expected before buying the camera, because so far I have only taken still pictures and have not used any videos. If necessary, I use the Canon 22mm EF-M lens.

I've seen a lot of recommendations online for cameras of the same family (M50, M100, M6 I) and not many specifically for the M6 ​​II. Either it says that you can't remove the box, or switching to MF removes it. Neither seems to be the case unless there is a way to switch to MF that I haven't tried yet.

This is not particularly important to me, but I wanted to ask whether there really is a solution and for clearer search engine optimization than the many outdated camera forums in which I used to look for a solution.

A lens + TC is just a lens from the perspective of the camera body. So if your lens + TC works on your Nikon, they will work (optically and mechanically) on your GH5. So the question is whether the Nikon TC and a Tamron lens can work together.

Few people seem to use a Nikon TC with a Tamron lens; they mostly do the opposite, a Tamron TC added to a Nikon lens. So if you intend to use the TC primarily with the Tamron lens, a Tamron TC would be less expensive and work just as well.

The D7100 housing that this lens works with has a focus motor built into the housing, which is mechanically coupled to Nikkor AF lenses and third-party equivalents to move the focus elements in the lens. Your D3300 has no focus motor in the body.

To use autofocus, you must use your D3300 Nikon AF-S or AF-I lenses or equivalent third-party lenses (e.g. Sigma HSM or Tamron's USD and PZD lens series) with focus motors built into the lens . The camera electronically transmits the focus information to the lens. If you are using AF or equivalent lenses (such as the Tamron AF LD 200-400mm f5.6 Model 75DN listed in the question) with a D3300, you will need to focus manually.

This frustrating division into two is due to the fact that Nikon switched the horses in the medium flow in relation to autofocus lenses.

When AF technology emerged in the late 1980s, Nikon attempted to develop a system that would allow old F-mount lenses to be used as manually focused lenses on the new AF-enabled bodies until the late 1950s. In addition to maintaining the mechanical connection between the camera and lens to control the aperture and the associated measurement, the focus motor was placed in the camera so that the focus elements in the lens were driven via a mechanical connection instead of placing the focus motor in the lens.

Another major camera manufacturer opted for a clean break and the creation of a new lens mounting system with a fully electronic connection between the camera and lens, as well as the placement of the focus motor in the lens. The new "Ultra-Sonic Motor" design that Canon used for all but the low-end lenses soon proved to be far superior in focus speed and speed compared to the mechanical connection that Nikon, Pentax and others used Reliability. To remain competitive, Nikon added electrical contacts to its F-mount system in the mid-1990s and began developing AF-I and AF-S lenses with motors very similar to the Canon Ring USM. Nikon continued to place AF motors in most of the bodies to power the existing AI lenses. When used with newer lenses, the focus motor in the camera is switched off and the motor in the lens moves the focus elements. The AF motor only snaps into the camera housing when a lens with AF capability is installed but without a built-in motor.

When digital SLR cameras came on the market, Nikon finally decided to keep the camera's AF motor capability only for its higher tier bodies. The D7xxx series, the D500 and all full-screen bodies currently have a camera focus motor. The D3xxx and D5xxx series do not. 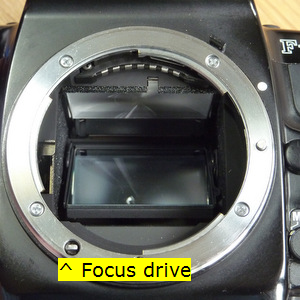 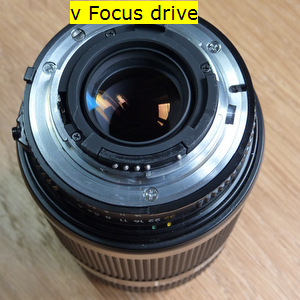 You will probably also need to set the lens aperture ring to the narrowest aperture position (highest f-number) so that the camera can control the aperture.

If the camera is communicating with the lens (that is, if the camera does not display an error and refuses to take pictures and / or shoot massively blown out pictures with narrower apertures), there are really only two possible parts that can be realistically bad:

If your camera has a live view mode, you can definitely use it to determine what is wrong, since the focus sensor is not used in live view mode.

Otherwise, your only option is to try a different lens. Statistically, this is probably what's broken. So this is generally not a bad idea. Especially if your lens is not focused internally (i.e. if the end of the lens moves in auto focus mode), you are almost certain to have a defective focus motor on impact. Given that most higher quality lenses are focused internally (for this very reason), as others have suggested, this is a good opportunity to update your lens.

However, when looking at the photo, it seems as if the focus is on the branches of the trees above and not on the girls' faces. 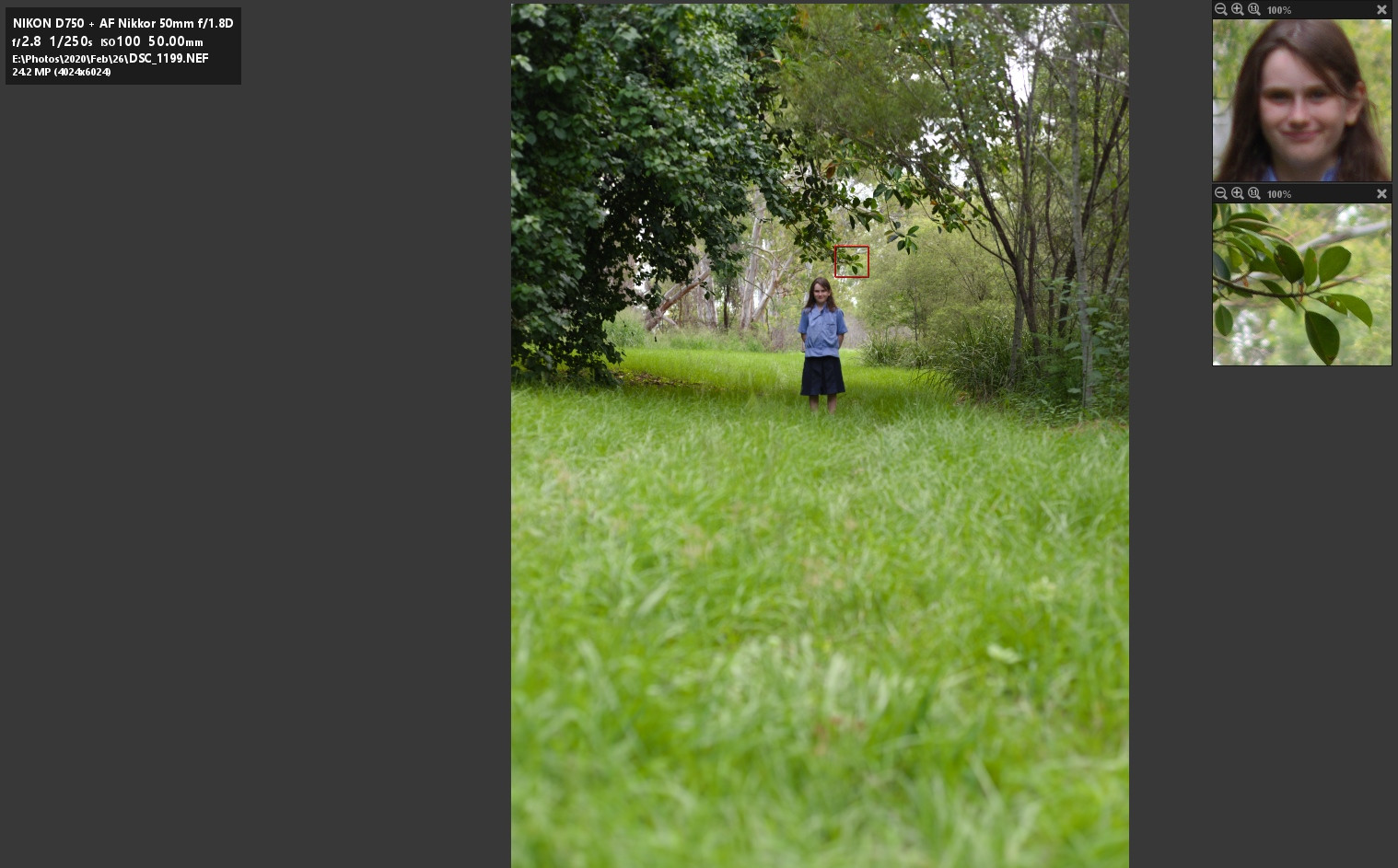 Other photos that were taken closer are sharp, but those that are a little further away appear to have completely missed focus. What could I have done to ensure that the camera fixed focus in the right place?

Obviously, things like "getting closer" or "manual focus" are, but if this is the composition I want, what is the best way to actually focus the autofocus on the right focus point? What am I doing wrong?