months ago I found an entry on StackExchange or somewhere else on how to install the latest (!) bfgminer binaries directly from terminal. I can not find the stackexchange post, no matter how deep I search here / on Google.

I do not remember if it was a download directly from luke-jr’s website via terminal or from somewhere else. I only remember that it was done via the terminal and it created an executeable shortcut in the /bin/ and/or /usr/bin/ folder.

Visiting the website from luke-jr triggers my anti virus software telling me the website is infected or hosts infected files. So I can’t visit it directly sadly.

Months ago I tried it out on my old RPi and it worked just fine. But now that I had to switch to a newer RPi I can not find or remember the correct terminal command for installing bfgminer binaries directly.

More details about why I need the binaries:
Compiling prints out LOTS of errors for me.
Using ‘sudo aptitude install bfgminer’ needs “aptitude” installed, so I tried to install it and it returned lots of errors, most of the package files where not downloadable (my Internet connection is fine by the way).

Can you help me out with a terminal command that let’s me successfully install bfgminer on raspbian?
On my old Pi I managed to install it without aptitude and without compiling it first.

i have a computer i would like to solo mine bitcoins with, no matter how small my chances are, i am determined to find out my hashrate for mining…

I have tried gpuminer and cgminer on ubuntu and windows with varied results nothing works except bfgminer one time on a gtx460 which gave me 68mh/s, i cannot recreate this now and most information is now out dated in terms of debugging and fixing errors…

nothing i do seems to work now

it seems something which was updated either in ubuntu or bfgminer in the past 5 days has made my instructions i follow to setup bfgminer, stop working…

i have a bitcoin core client ready my question is:

how on earth can i get bfgminer to work now?

i am doing this now from ubuntu terminal:
Code:

i removed sensitive info with xxxxx

bfgminer does not find any devices

please dont reply “gpu/cpu solo bitcoin mining is obsolete” – i still want to give it a go – if my hashrate is even one hash per second, i still have a chance, am i wrong?

mods please dont delete this… send me a message instead?… i dont want my topic to get lost in a lesser active sub forum… or deleted entirely, i need help! i am going nuts here

im attempting to build on a windows 10 machine

nothing seems to work i get errors in all stages: autogen, configure and make

im using mgwin64bit now and got to the make stage succesfully…

i am able to autogen, configure but when it comes to make i get an error:

Could someone help me come up with a solution?

I am trying to mine solo.

I have installed BitCoin Core on my Windows box, set up incoming connections 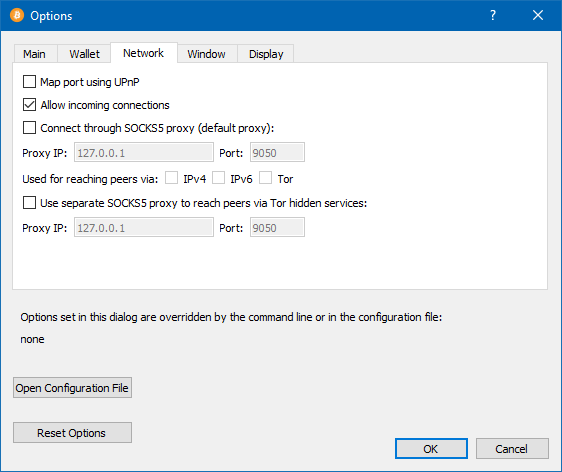 and wrote in config file <BitCoinStore>/bitcoin.conf

Then on Linux box I ran

Why? What is invalid?

Should I run bitcoind instead of thus GUI on Windows?

I am complete newbie and just want to see, how it works in priciple. No profit required. I have created an account on slushpool site and have username and password. Then I go to my ubuntu machine (a desktop, with GPU, no ASICs or something) and ran

It started to print in cycles

Why? What is happening? What I am doing wrong?

I installed Bitcoin Core on my laptop and created a Slushpool account. Then I installed bfgminer on my RPi3 with the following commands:

Then I connected GekkoScience Compac USB Stick Miner to a USB hub and connected it to the USB port of the RPi3. After connecting, I ran bfgminer with the following command:

But it shows the following errors:

I also have another doubt. It's been a few hours and I still do not see any workers in my portal. How long does it take for a worker to show up?

I try to open bfgminer, but I can not. The window is displayed but immediately closed.
What can I do? the window is like a cdm.exe

If you like Minera, you can send a donation to my BTC address: 1AmREReHNLec9EaW7gLRdW31LNSDA9SGR1

It should also support all CGminer / BFGminer forks.

If you like Minera, you can send a donation to my BTC address: 1AmREReHNLec9EaW7gLRdW31LNSDA9SGR1

* Fixed a security error during login* Scan network added network for scanning* Fixed a bug that prevented Minera from running in Raspberry 3 Model B +* Cgminer has been fixed to allow all Antminer models with or without JSON errors (S9, S9i, L3 +, L3 ++, D3, Z9, Z9mini, V9)* The ability to purchase lifetime licenses without ads has been changed* Fixed price for license up to $ 50 (can now be paid with several coins)* Local miners updated (Cgminer, Bfgminer)Added "Futurebit Moonlander 2" Custom Miner

* Troubleshooting Limiting the number of network miners* Improvement: host name / system name of the miner on the logon / lockout page* Updated miners with the latest versions (Cgminer and Bfgminer)* Updated Raspbian version on Jessie Debian version (you need to flash your SD card, see below for details)* Removed all save buttons and introduced the new one-save buttonAdded protocol reset button to clean up log system files (Minera and Miner only)* Added system information on the lock screen* Changed position of the "Update" button (above!)* Inserted advertisement in Minera (yes, I know you do not like it)* The Remove Ads button has been introduced (only 0.01 Btc for the system forever, read more below).* Many other small bug fixes / improvements

* This is just a maintenance release to update the dead Ghash.io multi-pool with the LTC pool.* Bfgminer updated to the latest version (5.4.1)

Fixed time donation for cgmin user* The Cgminer Dmaxl pool hash error has been fixed* The status of the dashboard window is hidden or not* Added Dashboard Panel Settings Enable / Disable* References to MobileMiner have been removed* Added the bitstamp rates Usd + Eur in the mining mining profits* Bug with update fixed … shit! I'm sorry

* Possibility to add network miners like Antminer, Rockminer etc.* Possibility to add another remote Minera system as network miner (this only works if the Network Minera uses bfgminer / cgminer as a local miner, not for cpuminer)* Automatically scan the LAN network to discover Network Miner* Add / Remove / Select pools on the fly for Network Miner* New Network Miner Widgets* Fixed changing the web password* Fixed incorrect pool in Mobileminer* Ability to change the system host name through the settings page* Ability to change the system user's password on the settings pageAdded option to not attach the JSON configuration file to the local Miner command* Added Eur / Usd BTC rates* Added error from the log file if Miner does not start* The dashboard page has been redesigned if the local miner is not running (now other information is displayed, even if the miner stopped or does not start).* Added Network Miner to Mobile Miners (you have a new Miner System for every Network Miner you have)* Built-in local miners updated to the latest version* An update for the libusb library has been added* Added preconfigured miner options (I've added several preconfigured options to the settings page so novices get everything ready to start)* The top bar widgets have been redesigned and are now visible on all pagesFixed focus event in Firefox (duplicate table rows when reloading pages)Updated JQuery* Rewrite many code

* Fixed a major bug that caused stored data to be lost on reboot. Now every storage unit contains a Redis BGSAVE to immediately save the data on the hard diskAdded the ability to start the Miner process as superuser / root instead of the Minera process. This may be useful for some devices that need to access special things in the system* Bfgminer has been updated to 4.6.0-6-g8f60a5f and Cgminer to 4.5.0

* This release only updates Bfgminer and Cgminer to their latest relative versions.* Reverse Cgminer Dmaxl Zeus fork in support of Zeus & Gridseeds (Note, it is known

* Added MobileMiner actions to start, stop, restart, and switch* Send anonymous statistics* Temp / Freq added if available* The logging with cgminer and forks has been corrected* Fixed Pool Hashrate dmaxl* Bfgminer and Cgminer-Dmaxl have been updated to the latest versions* Added reset buttons* Fixed many bugs

* Fixed several bugs after version 0.3.0* Added web terminal window to log in to the system directly from the dashboard

* Added custom altcoins rates (go to settings and choose your favorite, max 3)* Added Autorestart if X devices may be dead (go to Settings and enable this option if X devices do not send shares for more than 10 minutes, the Miner will be restarted)* A fixed Minera donation pool has been added. (Do not panic!) This does not mean that there is a Minera fee, you can still add as many pools as you like and keep the Minera pool for the last one.)* URL pool check removed when adding a new one (you can enter any string as the pool URL)* Added system availability* only on reinstallation – added wicd-curses package to easily manage WiFi cards (if you just want to run it: sudo apt-get install wicd-curses)

What files, libraries, classes, blocks of code are used for TCP / IP connections, peer discovery, HTTP connections, UDP connections in Bitcoin Core (0.1.5 and newer versions, including the last 0.18.0) and other c / c + + – based wallets used? cgminer (first 0.1 and newest versions 4.11.1), bfgminer (first 0.1 and newest versions 5.5.0)? How is network programming done in Bitcoin software? How programmed server, client, peers? And on which programming and software standards, specifications (RFC, ISO, etc.) is this network communication and programming based? Be more precise and concrete, better with source code examples.

What files, libraries, classes, blocks of code are used for TCP / IP connections, peer discovery, HTTP connections, UDP connections in Bitcoin Core (0.1.5 and newer versions, including the last 0.18.0) and other c / c + + – based wallets used? cgminer (first 0.1 and newest versions 4.11.1), bfgminer (first 0.1 and newest versions 5.5.0)? How is network programming done in Bitcoin software? How programmed server, client, peers? And on which programming and software standards, specifications (RFC, ISO, etc.) is this network communication and programming based? Be more precise and concrete, better with source code examples.