I am developing a tile-based online multiplayer game, but I am stuck. Players can move across the grid in the four cardinal directions, as can enemies, but two players/enemies cannot occupy the same tile at the same time. Positions of all players/enemies are synced for all clients.

My current implementation of movement: Clients send a ‘request to move’ to the server whenever they are stationary on a tile.

I have implemented client prediction. When a button is pressed to move, the client shows their character immediately moving in that direction, as opposed to waiting for confirmation from the server, preventing lag between player input and visible results.

The issue arises when the player attempts to move to a position that will soon be occupied. For example, the player presses up when an enemy is very close to entering the tile above the player (though they can’t currently know that the enemy will choose that tile next). Locally this is confirmed and the upwards animation begins, but by the time the request to move up arrives at the server, the tile is no longer free, and the player is not moved up on the server.

This creates a situation where the player’s local position is out of sync with that of the server. My current solution to this is snapping the local player back to the server’s position when this happens, but this looks awful. It seems to be happening a lot, making the game nearly unplayable.

Is there a way around this?
Any help would be very much appreciated, thanks.

Some other notes: I send updates from the server 10 times a second, which consist of every object’s position (and other stuff). When a movement event is processed, the object’s position is updated immediately, even though an animation follows.

Currently I have a working 2D SAT collision system with only boxes, but works with static rotations as well, leaving room for triangles. One of the issues I’ve been able to resolve was tunnelling, thanks to this thread’s psuedocode that I got working for myself.

Problem is, this doesn’t support moving rotations like a system using a minimum-translation-vector. If I rotate alongside the side of an object, the system will fail even if I’m not moving.

My first thought in solving this was to use the longest line you can draw in a square (that being the points on either side of a square) and comparing the length of that to whatever side on any axis, but even squares have different sizes on any given rotation projected onto an axis.

The system also doesn’t work with multiple objects, because – while you can use the algorithm on a group of objects and find the shortest distance out of all of them – if I conserve my velocity relative to the colliding axis, diving into the crest of 2 objects means I will phase through one of them not beyond a 45 degree angle.

Is there an effective way to resolve collisions on rotations and groups of objects, while using this anti-tunnelling algorithm? I don’t care if it’s expensive, I’ll take whatever you can think of.

I try to have cars on the street. The cars have a trigger at the front and a hit box at the back. What I want to do is when the trigger hits the hit box, it compares the variables for the speed of the two cars in the collision, i.e. H. The car in the back slows down or corresponds to the speed of the car in front. However, I have problems determining and comparing the speed of both cars. This is because both prefabs were created using the same script. What I learn means that I am only referring to the same script and not to the actual values ​​of the individual car. But how could I get around this? Is it possible for collisions between objects to occur with the same script?

This has been asked a few times, but none of the answers worked; The other questions are also very old. I have an object with a mesh collider on it. The collisions work perfectly in the editor. However, there are no collisions at all in the compiled game. It is important to note that other colliders (box colliders, sphere colliders, etc.) work perfectly both in the compiled game and in the editor.

The network is the following: 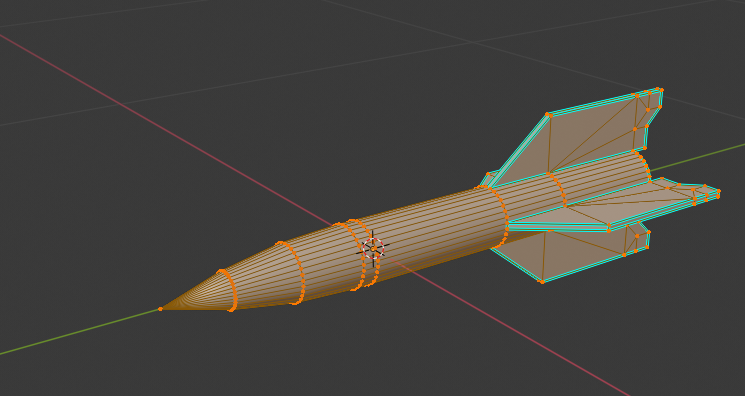 Additional details:
– The object has a rigid body and a convex mesh collider.

I'm trying to create a game from scratch in Dart, much like Minecraft.

As far as I understand, there are two main functions in a general game loop:

(I'm referring to Minecraft as it's a well known and fairly simple game.)

I'm trying to understand when collisions should be checked. Are they checked every time the screen is drawn (rendered) or when the tick function is executed?

I try to improve certain matches that often occur in many, many dimension columns. As I understand it, my decisions are:

If I use something like "checksum", is there a known algorithm to handle the collisions?
So the match would work like this:

Everyone tried it checksum Make hashes faster on a large number of columns?

I should say I'm looking for a SQL / TSQL solution. I can easily achieve this match using Python or C #

I believe that primary clustering is a problem with the linear probing method of hash collision resolution. However, the description gives the impression that there can be several clusters of connected blocks. I thought there could possibly be only one block since the linear check goes through all the addresses one after the other.

I am working on a traffic simulator. At the moment I have options to manage 4-way stops and a solution to efficiently determine which vehicles are colliding with each other. All vehicles work independently of one another and overlap / ignore all vehicles they pass.

I want to find a way to resolve collisions between vehicles so that a Vehicle will follow that Vehicle in front. When a Vehicle stops at an intersection Vehicles the ones that follow should also stop and wait.

The relevant components that I have already implemented are listed below:

The only seemingly practical algorithm is currently:

Problems with this solution:

Ideally, moving the vehicles would require n Calculations per tick.

I am open to any suggestions here. I tried to make my code as modular as possible, so I like to rewrite large parts of it if there is a better architecture to solve this problem.

Below is the visual representation of the TileGrid (black), TileGraph (purple) and Vehicles (circles). 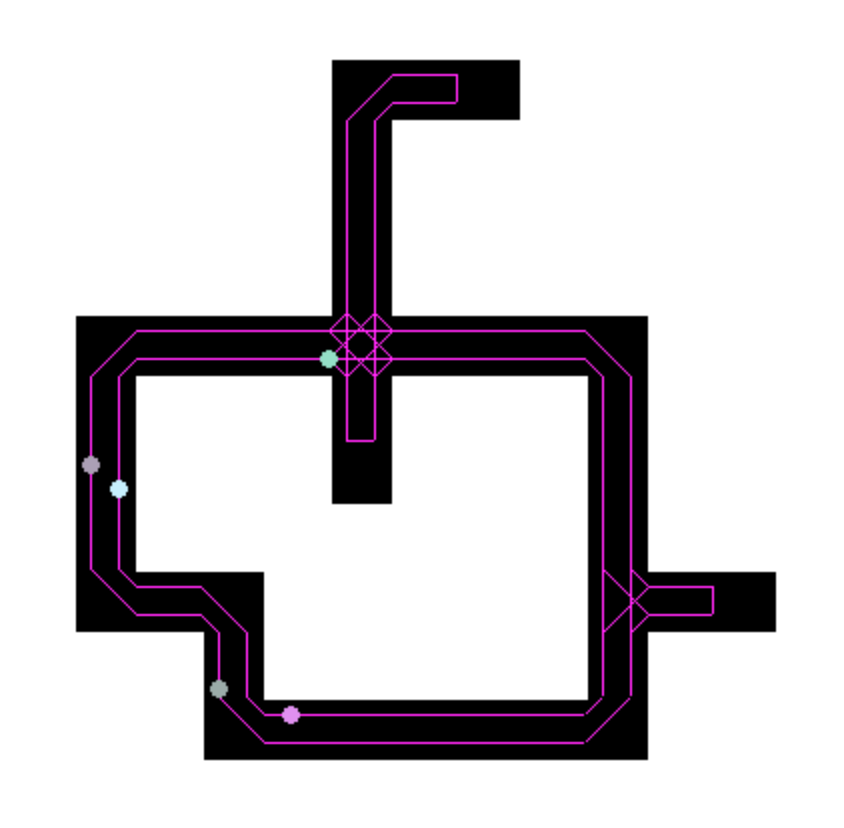 Ok so I tried to figure out how to set it up and I can't get it to work properly. I'm trying to get the functionality that resembles the moving logs in Frogger game if you're familiar with it. So far, what I have has worked with collision detection for just one pygame.sprite.Group ()

Ok so in my code

doesn't do the same.

I am confused why this is so when someone has any ideas. How can I fix the problem so that it works for both?

I make a game in which I have a player and enemies who follow the player depending on the distance.

The map has been marked with a grid so that enemies can follow the player. When the player approaches the enemy, the enemy creates a path to the player and ignores the walls (obj_Block).

So something similar happens in the picture below: 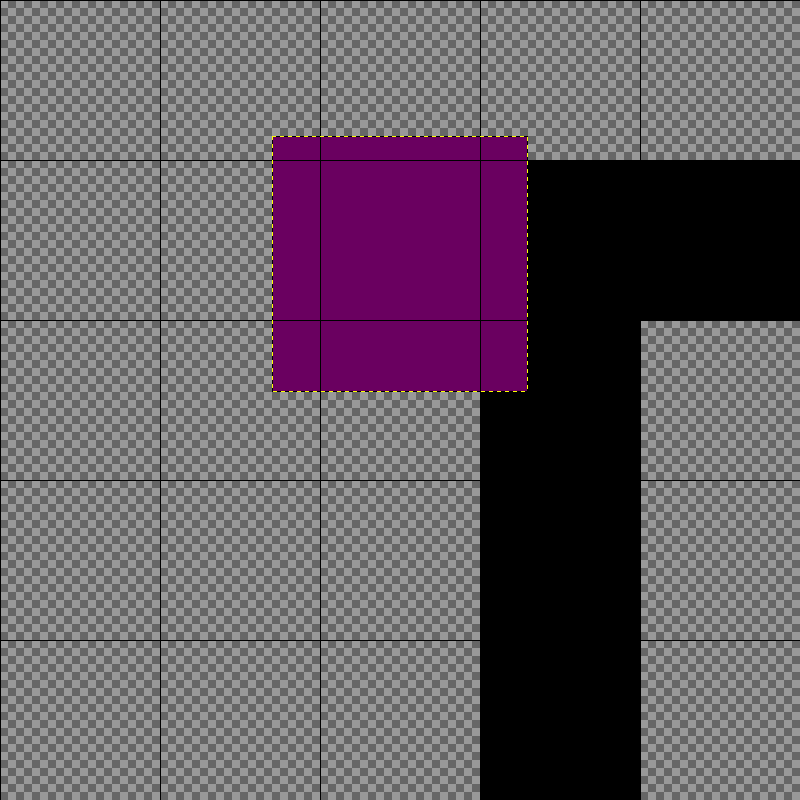 The enemy walks through part of the wall while chasing the player.

This is obviously due to the different size of the grid and the enemy. Because I did a test with the 20×20 enemy and it worked perfectly.

I resized the grid (which creates the path) to 32×32 and it turned out that instead of crossing the wall, the enemy is far from the walls (in some places on the map): 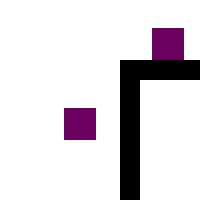 I would like to know how to do this so that none of these situations occur. Regardless of the size of the enemy.

Video I made the code: