I am trying to compile after upgrading to Magento 2.3.5-p1
and I get this error:

Any idea how to solve the problem?
Thanks a lot,
Kobi

I've been around for ages and can't compile Bitcoin Core 0.19.1 on my Ubuntu 18.04 computer (no VM). I follow these instructions exactly:

everything goes well until autogenous Step. The configuration script runs normally, but I always get the same output no matter what I do …

I tried to uninstall and install Ubuntu. There have also been several attempts to compile in a clean repository, but the output always shows that the target operating system is Linux. I run it do Order after that, but never get the exe. I'm stuck and I don't know what else to try. Any help would be appreciated.

Is it possible to check the parameter data type in the function without an error in the compilation time when calling this function in C #?
I don't want to get a compile-time error while passing the wrong value to the function in C # like Javascript.

The following is my sample code:

I updated the Tomcat version to 8.5.51 from 7.0.59. After this upgrade, when trying to access the index.jsp page, the following exception appears.

JspSourceImports Interface has been added to the device list

I thought it might be due to a change in code / syntax backward compatibility in the version, so I replaced my index.jsp content with simple Hello World Message but still facing the same problem.

Also tried solutions from the bottom left, but still not working.

I've been trying to tweak a bit of code in the past few days, but I think I may be misunderstanding how compiling certain objective functions works. As an example for most barebones, I've attached a screenshot below of the speeds for array creation with ConstantArray, Table, and the compiled versions of each version.

We see that ConstantArray is almost 10x faster than Table in this simplest case (perhaps not surprising given this simplicity). When we try to compile, ConstantArray cannot be compiled, and therefore the time required only increases due to the overhead, I assume. However, the compiled table call also increases over time. This is unexpected for me, so I think I have to do something wrong in this comparison. Any thoughts on how to speed up compiling tables if this is possible in such a situation? I should also note that using array is both categorically slower than both other options, both non-compiled and compiled. 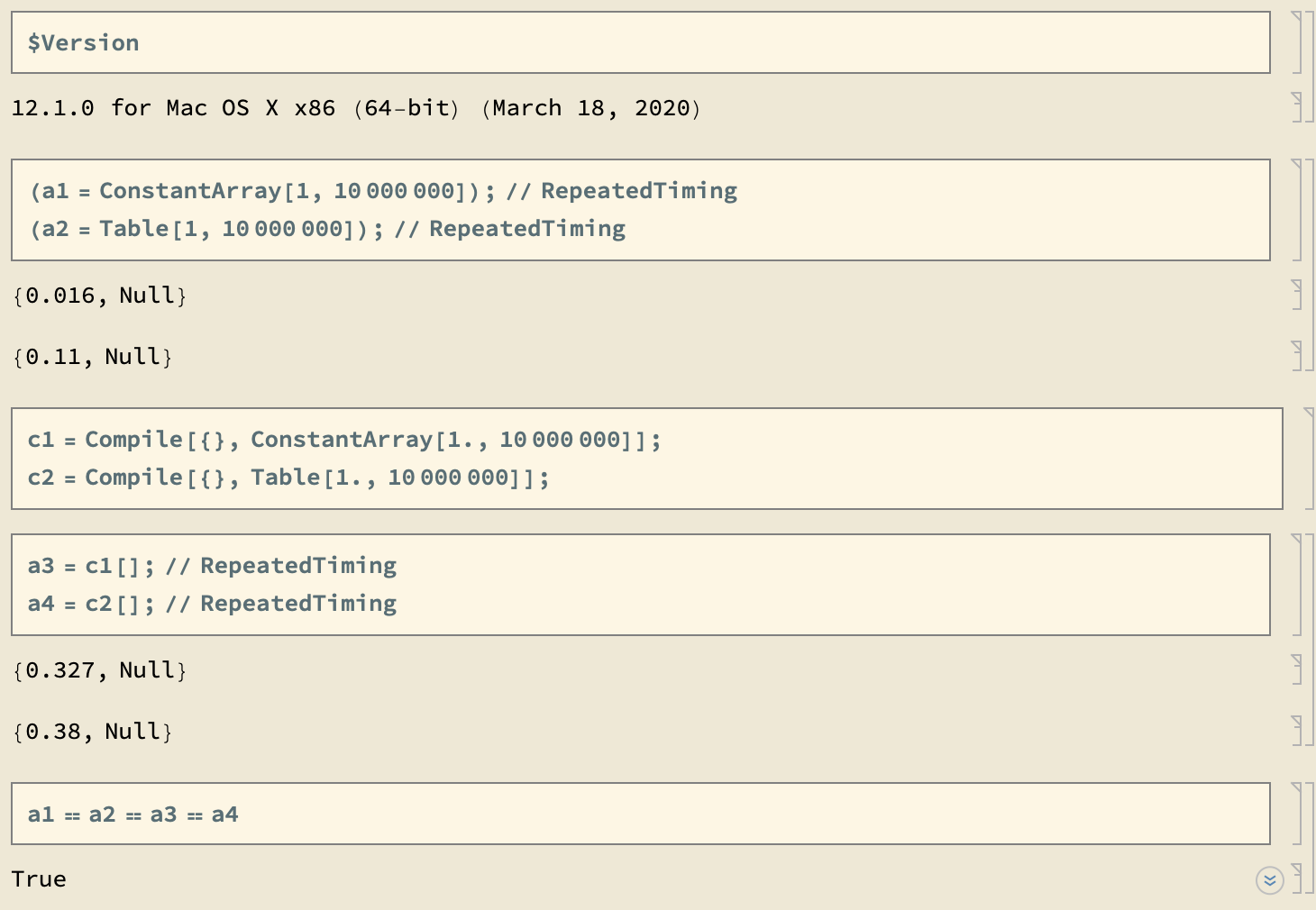 I have a small C ++ project trying to learn cmake. I am currently trying to include clang-tidy by checking if cmake finds an executable from clang-tidy and if so, the CMAKE_CXX_CLANG_TIDY Variable. As far as I know, after setting these variables, all compiled targets are created once with the compiler and once with Clang-Tidy.

Now I have the problem that I build with g ++ that knows more compiler flags than clang (e.g. -Wuseless-cast), so I get an error when fluffing with clang-tidy. I know I can do all of this with Clang, but to make my code robust I want to be able to do it with different compilers.

Is there a way to set different compilation options for the compiler and linter? I am currently checking which compiler I am using and would like to activate as many checks as possible. Is there a variable like CMAKE_CLANG_TIDY_COMPILE_OPTIONS or something like that to define multiple sets of compilation options?

Thank you in advance!
Regards, Sebastian

As far as I can tell, there is no crontab set up in the staging instance of my current business. The cron_schedule table is empty. Is this required for custom modules / topics / etc. to work properly?

What is the most basic setup I can do to make the above work if needed?

Theoretically, what you are asking for has been investigated under the name "translation validation". See e.g. B. the following classic paper:

In practice, compiling is such a complicated and confusing process that I doubt that there is an easily verifiable certificate that proves that the whole compilation process was done correctly (including lexing, parsing, front-end, optimization, back- End, assembly, link, etc.). Academic work typically focuses on only one or two phases of the process (e.g. some of the stages of optimization).

Easier is interesting because it means that the verifier may be more trustworthy (e.g. less likely to have errors). The classic work on validating translations focuses on this case.

Another question is faster. Some optimizations are deterministic and will not benefit, but there are certainly many optimizations that involve a search over a certain range of possibilities. An extreme version of this is the concept of "super optimization", in which a short code sequence is optimized by searching through all possible optimized versions and finding the one that is fastest while semantically matching the original. See e.g. B. the following papers:

I have a request for the following form

I can't change anything about this query myself. It comes from an application.

Each time it runs, the update values ​​change so that a new query plan is generated and the previous plan is not reused.

Forced parameterization is enabled, but does not appear to have any effect on this query, probably due to the way it is executed.

When the query itself is executed, a total of 4 read processes for the update are displayed. In this case, the execution itself did not cause an update because no rows are returned for the where clause.

With the Profiler I see that the time between the receipt and the start of the query is almost the entire time of the query (1 second). The actual execution takes place almost immediately.

The profiler shows 455,000 readings !! that are not displayed in the query execution itself.

This is on SQL Server 2019, no cumulative updates yet. I've searched the CU change log for anything that might have to do with it.

This is a general question about AppStream modules in CentOS / RedHat 8. Should we disable the AppStream module for this app when custom compiling apps like Apache or PHP? I don't seem to find any direct reference in the documentation. Is there a benefit and / or need? Thanks a lot!