One of my favorite “decision helpers” in design is the Principle of Least Surprise: try to avoid system behavior that your users don’t expect. (Yes, sometimes this is pretty straight-forward, and at other times it’ll take lots of usability testing to find out what, exactly, users expect. 😉 )

You already noted that options 2 and 3 violate that principle.

In contrast, option 1 is very common pattern that can be generalized like so: allow users to navigate to an empty container (a folder, a page, a tab view, etc.), but clearly indicate that it is empty.

To help them decide whether a container is worth opening, you can display the number of contained items in the context of the navigation control that takes users to that container.

Here’s a simple example from Apple Mail: The selected Inbox folder is empty, and the main content area displays an explicit notice. Other folders display the number of unread messages they contain. 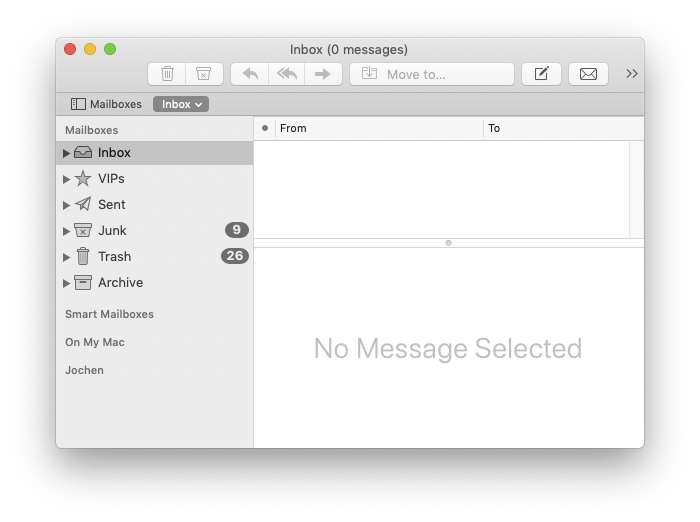 Applied to your design problem, you could implement option 1 and add the number of available analytics graphs to the sub-navigation tab labels. Something like this:

Mike M’s approach is another good option, but I just find it that little bit more restrictive.

I’m working on a fairly large analytics dashboard. One challenge that is occurring repeatedly is how to always display relevant information without losing consistency.

We have a set of items that can be analyzed. Selecting and changing those is always possible. It’s the top-most navigational element (think: drop-down in the top navigation bar).
We have a set of analytic. While many of those analysis are shared between different layers, some are not.

What happens, when a user currently is on page Z for layer B and changes the selected layer to A. We came up with three options:

I know I’ve done this incorrectly, but I don’t know what the right way is.

Right now I have two clients that connect to a server. Each tick the players send a packet of information containing their X,Y to the server. The server takes those packets and sends them to the other clients. So it’s like this:

When the NetPlayer receives a new position packet from the server, it calls MovePlayerTo(Vector2 _newPosition);

Then, in the NetPlayer.Draw method (called 60 times a second), the Position is set like so:

This has smoothed the player out pretty well, but it still appears as if it’s not being drawn as smooth as a local player, even with interpolation. It seems like it’s being drawn at 45FPS. If I lower my client tick delay to 200ms, it lerps very quickly between those positions in short bursts. It doesn’t actually make the entire movement smooth.

I’ve tried changing the MovePlayerTo() to set an OldPacketPosition, and NewPacketPosition, and then lerp between the last packet.position and the new one, and it becomes even choppier, no matter what I set my (float) lerpValue to.

Also I noticed if I jump up and down a bunch, it doesn’t show the NetPlayer hitting the ground. He moves smoothly and kinda bounces before he even hits the ground and shoots back up in the jump animation.

I know I’m doing this improperly. I’ve seen other people set their tick rate to be really low, and the positions aren’t super accurate but the movement is still smooth between packets.

Let us imagine that my application has to perform a series of SELECTs (for different tables) in succession to collect different information from the database and we do not want any of these tables to change as we collect the data.
With postgresql isolation levels "repeatable reading" or "serializable" isolation levels can be used. However, if another transaction commits changes to a table that we have not yet referenced, they will still appear even if our transaction has started as the following sequence of actions indicates:

However, if T1 accessed t before T2 did the insertion, 10 lines are displayed for the duration of the entire transaction:

With the above behavior, if we need to access multiple tables during the transaction, many of them can change in the time interval between the start of the transaction and the moment we access it.
I understand that isolation levels should work this way, so no explanation is needed here.

But is there a way to create a kind of "snapshot" after a certain point in time? Are explicit locks required in this case?

I am aware of three important "hierarchies" of mathematical theories, but I do not know how to relate these hierarchies. Here are the hierarchies I'm thinking of:

For example, the "strongest" theories (such as ZFC + large cardinals) usually seem to be examined for consistency, as opposed to reverse math or proof theory. I have the impression that proof-theoretical ordinal numbers are most often used for relatively weak theories, and that the reverse math is somewhere in the middle. But I'm not even sure where to look for overlaps in these areas, also because the types of theories that are considered in each hierarchy are slightly different.

In general, I imagine that there are no direct implications saying that one of these sub-orders refines one of the others (even if their areas of application coincide). But I imagine there are some general tendencies – a stronger theory in one hierarchy should probably be stronger in another hierarchy as well.

The Stack Exchange network consists of 175 Q&A communities, including Stack Overflow, the largest and most trusted online community, where developers can learn, share their knowledge, and build their careers.

Why do I get different colors if I apply exactly the same gradient to all images in Darktable? I understood that the camera's white balance setting doesn't matter for a RAW file, and that I would achieve some color consistency if I edited and applied the same white balance to two different images of the same scene.

Then why do I get that instead? And how can I determine the color consistency between these images? 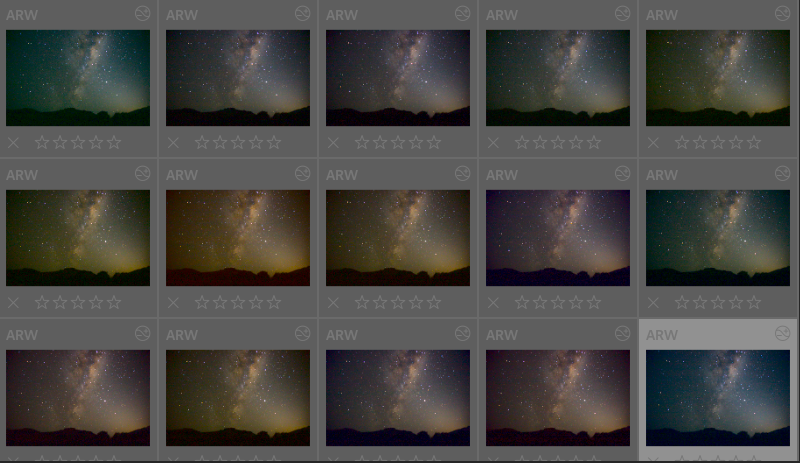 Files in .ARW format were recorded with Sony a6000.

That means its substance and consistency can be changed. This is similar to the unique nature of the Mimic, but it is not the same: it is also amorphous, but it is neither undead nor immaterial. For example, if the shadow were or could become immaterial, it would be able to move through things like a ghost.

Physical movement. The ghost can move through other creatures and objects as if they were difficult terrain. It suffers 5 (1d10) power damage when it ends its turn in an object. {A spirit and a spirit also have this function}

Let's look at some important features

Note that worldly weapons can damage it, so it has something Substance to it.
What can the shadow do if it is amorphous?

Amorphous. The shadow can move through a room that is only 1 inch wide without squeezing it.

Vampires in the form of mists and water elementals can do something similar, and yet everyone has a different consistency.

Shadow Stealth. The shadow may last in low light or darkness
the Hide action as a bonus action.
Sunlight weakness. In sunlight, the shadow adversely affects attack rolls, ability checks, and rescue rolls.

The last and somewhat unsatisfactory answer is that a shadow is almost immaterial, but since this term is not used to describe it, like other monsters, it is "almost unfounded" so you can't get a grip on it, knock You hold it down or otherwise.

Consider the infinite sequence of theories: