Suppose we have two processes P1 and P2. There are also two semaphores M and N that are initialized to zero. How to do it:

Therefore, neither process goes through the first instruction because the values ​​of M and N are zero and both are blocked.

However, if the initialization value for M and N is 1, they will successfully execute without deadlock.

Can this only be considered a deadlock due to the incorrect initialization of the semaphore?

First, this is a question that only a DM can answer, since such a creature can simply be called a plant, monstrosity, or anything else that the DM feels like. But there is a precedent!

The spur druid from the Ravnica campaign shot can use his spore aura to revive creatures that die as zombies. In all game statistics, these are counted as undead. So if you become undead, you can edit them.

As for Wizards of the Coast, it seems like D&D is perfectly fine if mushroom zombies are undead when it comes to RAW rules.

I am not familiar with role-playing games and I apologize if this question is poorly worded.

Suppose the players are sitting on a ship that capsizes. On the run from the shipwreck, they find an NPC holding on to the flotsam. The players decide that they cannot save the NPC and let them drown. Unfortunately, the NPC had a quest-critical item (e.g., an artifact needed to later kill the BigBadBoss). Since the item is now permanently lost, the quest will never be successful and the BigBadBoss will kill all players. They are dead, they just don't know it yet.

How can a GM continue the campaign if the players lose a necessary item like this? For this particular situation, I imagine the GM could try to give the quest-critical item to another NPC, but that may not be feasible (e.g., a player would have tried to examine the drowning NPC and the GM described the NPC as the owner of the artifact). It could also be something more serious, e.g. Players could kill an NPC that is critical to the quest, and bringing the NPC back to life would be incredible.

I imagine the GM couldn't do anything and let the players die, but then it seems like a pretty boring game for the GM because he already knows the end result.

If not, a plane goes to Iran, Cuba or Venezuela every few minutes. grundoon; Het dummass …. "intelligent people" believe what they see and know to be true, which means that we don't believe you or CNN. Apostasy Communist: UNIQUE Deliberately missed to save face. Are you really that stupid, stupid?

The creature is under your control for 24 hours.
After that, it stops following a command you gave
it.

The undead remain animated until they are destroyed. (A destroyed skeleton or zombie cannot be animated again.)

This indicates that the spell (since its effects are instantaneous) is permanent. Inanimate dead creatures (objects) therefore turn into animated undead creatures and are "destroyed" when killed, which means that they cannot be resurrected because they are now inanimate undead creatures.

Is there a mechanical way to release undead and return them to a de-animated state either as dead objects or as undead creatures? Would this exceed the 24 hour mark since it is technically a single, final order? This affects 5e, I only refer to 3.5e, since 5e in the PHB is a bit ambiguous regarding the duration and destruction of undead.

The only consistent solution to getting rid of free undead seems to be to let control go and give it up (which releases bad undead) or make the party whine about them (which can be tedious and time-consuming).

I think removing scrollbars is another example of the idiotic and superficial ideology of putting style over functionality. This is exactly how it should be, and it is an indication that society is doomed to me. Scroll bars serve an important functional purpose that other alternative methods cannot always replicate. I think the change is partly based on the idea that people use touchscreens, which is why they are not needed, but many people still don't. Many alternative methods require additional focus and sensitivity to manipulate them. This is a waste of energy that I would rather spend on work than struggling with a bad user interface. Traditional scrolling methods usually involve scrolling the keyboard by pressing the down arrow key. This is a lot easier for me than with other methods that require more concentration. However, since the scroll bars are removed, scrolling on the keyboard sometimes disappears, which should be a LARGE number – no! One example is The large social network F has always caused trouble at a certain point due to its "dynamic" scrolling style as you scroll up the message and where you don't know where you are talking while you scroll up and suddenly an extra charge of the conversation history is loaded and you jump far ahead of where you wanted to be.

I think it's also partly ignorance and partly a desire to save resources and bandwidth on the servers to save companies money at the expense of the user experience. It's also about making things too stupid for idiots to make the use of very simple commands "easier", at the cost of problems for those who aren't amazed and who might want to do something very special. I hope blockchain heralds the end of this era in which the user experience is sacrificed to save money, and we can have systems that work quickly and are easy for both simple and advanced users.

Wouldn't it be great if you could use software like Skype and F Messenger to scroll right to the top of your message history instead of waiting forever to load one section at a time ?! I always suspected that this would save resources when the entire lot was loaded at once. However, if someone with a little intelligence and differentiated thinking designed this (which is more common in blockchain circles than in companies, I hope), we could all have our cake and eat it. We can save resources (which is still no small thing in the blockchain) and call up the information we want immediately without having to put up with this hideous system for loading pages.

Simply lay out the skeleton of the entire timeline history in a scroll bar along with the dates that appear as you scroll. As soon as you release the mouse button or scroll, this particular section can be loaded. If you want to go straight back to the beginning, scroll to the top right and only the first page needs to be loaded. However, if you need to load everything right away, for example to search for a keyword, all you have to do is provide a simple button that can be pressed if necessary to view the entire message history or the history of the one you scrolled through.

If someone specifically signals that everything has to be loaded, the blockchain should absorb the resources. This is different from companies of the old model, which I suspect are reluctant to allow even those who specifically need everything to load to be able to protect their resources for their dirty profit motive and the user kidding. For this reason we need blockchain and preferably the open version.

Any creature where two DC 13 con-saves fail against Gorgon Breath (or other such magic as Flesh to stone Spell) is petrified. In addition, a dead but lively creature (ANY physical undead) will suffer a similar stone fate once properly exposed to this magic.

Casts Gorgon's breath and / or petrifying spells on & # 39; dead & # 39; Bodies that are not yet animated / undead? As far as that is concerned, such a "dead" body purposeful about the magic version of this magic?

Concern, concern: It would be strange that a zombie ("dead") could turn to stone, but a carnal body (also "dead") is immune to petrification or may not even be a target.

In advance: this may be a lot of noise about nothing or otherwise an unnecessarily complicated way to see 5e decisions. In this case, corrections to such RAW, RAI and / or RAF shades would be invaluable.

I have a nice new Dell G5 5590 and 3 days ago the bluetooth adapter did not work anymore and I could not turn it back on. It has a Qualcomm QCA61x4A Wlan + Bluetooth card and only the bluetooth device is affected.

I've tried pretty much everything I know to fix this problem. I reinstalled the drivers, reset the driver version, and forced Windows to use an even older version helpful Windows troubleshooting tool, but so far everything has worked.

I also tried to track and understand what happened to at least look for something new, but the mistakes or clues I found were not enough.
So I decided to post it here, hoping someone would see something that I am not.
Here is a screenshot of the current state: 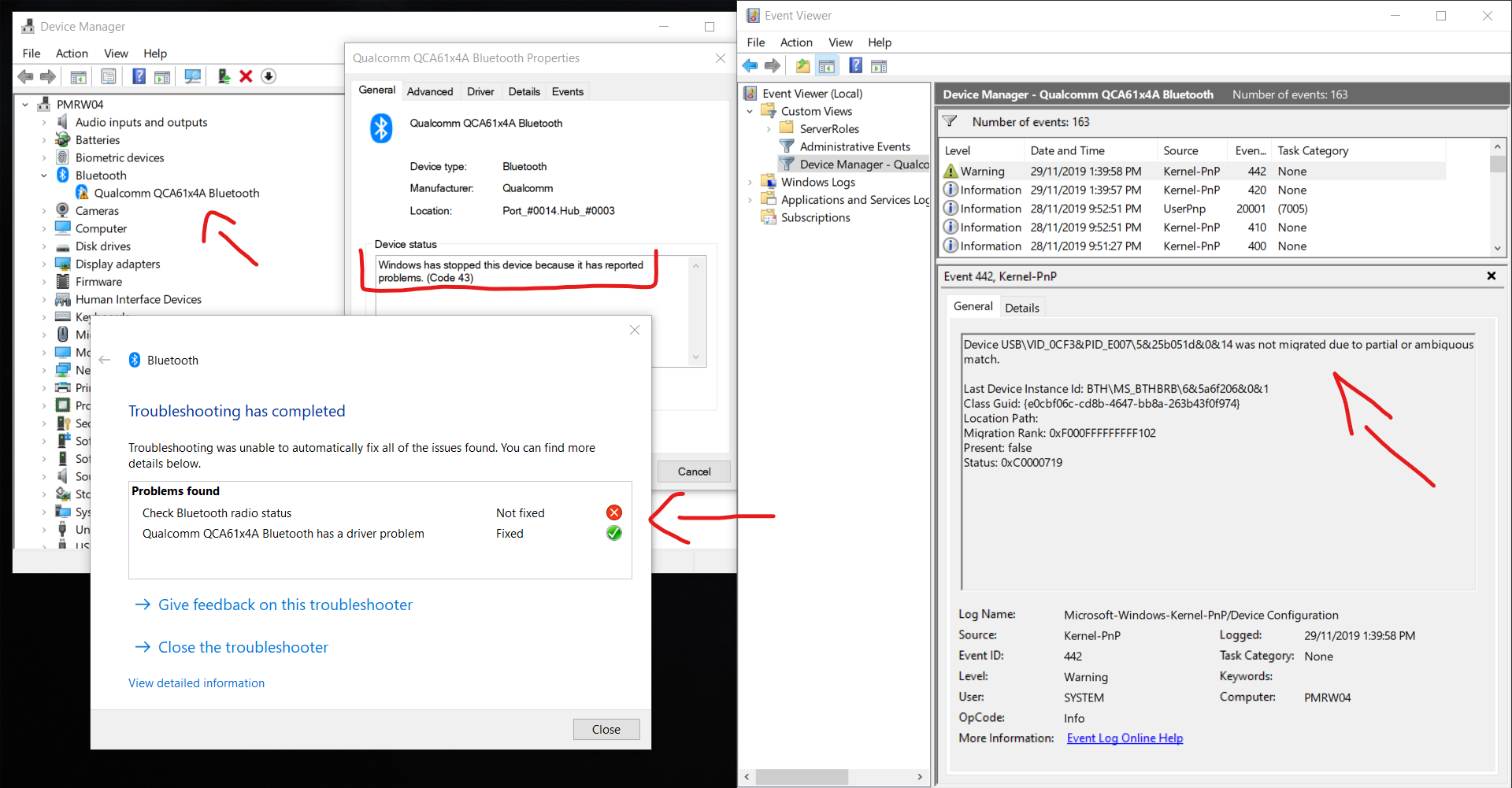 Let me know if more information is needed.

I have a 2015 Macbook Pro with Mojave, which has the internal keyboard of the French AZERTY type (ISO), as shown here:

Press dig (the button next to the return) or tilde (Alt GR n) act like dead keys.

The entry stops until the next key is pressed, if I want to type ã.ñorõ after ~ or à.è.ì.ò.ù after `

Is it possible to assign these so that they do not act as dead keys – so press ` leads to output as in line 1, not in line 2.

I tried installing carabiners and scripting based on their examples, but I can not find anything to assign the key to to,

In my test script below (which does not work) is the "from: {key_code" "backslash" what Carabiner Event Viewer shows when I press ` (Which is where is on US keyboard).

The "to: {key_code" "51" (or grave_accent_and_tilde) is what Carabiner Event Viewer Reports for the < Button on my keyboard and was selected only as a test.

I've seen several questions about where the keys are or how to swap them, but not how to prevent a dead key from behaving as such.

Is this possible in any way with carbines or otherwise?

I thought about changing the keyboard layout to Great Britain and then assigning each key to the French location, but I did not want it when there was a better way.