I will drive low bounce traffic with 3 minutes visit duration

We use Facebook, Twitter, LinkedIn, Pinterest, Instagram, YouTube, Tumblr, Quora, and Reddit posts, pages and groups for the promotion. We run common advertisements/posts series based on niches to bring visitors to our backlinks. After that, we redirect them to your website according to your traffic requirements. In that way, we can provide you a large targetted audience quickly and with a minimum cost.

You have the freedom to select the targetted countries.

I want to compare the writing performance of the two external database. I have timers around the write operation so that I can collect some metrics. Those two threads are running concurrently.

My question is will this design give correct measurement result regarding to the time spent by each write operation?
My understanding is probably not because the processing time given by CPU to each thread may be different. Let’s say for thread1, after timer1 started, cpu will not move forward to the followed write operation, but switch to processing thread2 instead. This may introduce some gaps between timer1.start() and writeToExternalDB1(consumedData). However, in that case, should we regard this gap as negligible if we are processing a lot of data? What should I do to give the correct measurement result?

On Mac, the VLC media player progress bar defaults to show the elapsed or remaining time of a video (in non-full-screen mode). Is there a way to make it show the total time of a video in addition to the elapsed time? I know this thread talks about how to show this on Windows, but I need to know how to get this done on Mac (since the Customize Interface option isn’t available on Mac).

I’m looking for https://xenforo.com/community/resources/xen-soluce-user-upgrade-duration.7459/ aslong as it works with 2.1.6 or higher I’ll be happy
Pretty useful as well, instead of making a ton of user upgrades you can just make one and set different durations.

While trying to work out fill-in flash semantics, it struck me that for the purpose of “overpowering the sun”, a short flash duration is rather important since it allows you to open aperture up while decreasing exposure time, keeping the overall brightness while increasing the effect of the flash.

It turns out that my ancient (from the 80s I think) Regula Variant flash specifies 1/1000s flash duration at full power (for which it has guide number 40 at its native f=35mm light angle and up to guide number 70 at f=200mm when using a separate “tele lens” attachment with a fresnel lens).

Going through a list of Metz flashes of similar age and power (including wand flashes with about double the power output), the full power flash duration pretty uniformly ends up as 1/200s. Requiring 5 times the exposure time makes shadow lifting at a distance quite more tricky. Particularly with fast leaf or electronic shutters, it significantly impacts the efficiency of a flash to deal with competing-light situations.

A current-time Godox TT685 has a guide number of 60m at f=200mm (if we consider the Regula specs a bit optimistic, that may be comparable) and a specified duration of 1/300s.

So what gives with regard to the large difference in specification? It cannot be the switch from thyristor technology to IGBT since the older Metz flashes still use thyristors as well. Is the flash bulb different possibly (the size factor seems the same as comparable cobra head flashes today) or driven outside of its comfortable specs?

In analog camera times, the utility in “overpowering light” situations would have been more limited due to larger flash sync speeds, so the main utility of such specs would seem to have been motion freeze in the dark. With modern flashes (and modern superzooms), large reach at short flash time would seem at least as important as it had been at old times.

Why were those kind of specs generally given up on for consumer-level on-camera flashes?

Hello everyone,
what is the difference , i am unable to get it.

Hello everyone,
what is the difference , i am unable to get it.

This question concerns this sentence in the spell’s description:

When exactly does the spell end? Before the action/effect affects the creature or after?

Here is the specific situation I am thinking about:

Alice is attempting to steal an object off of Bob’s person. Alice casts Time Stop and begins to go through Bob’s pockets to find the object. Can Alice use her action to search Bob, find/take the object, and use their movement to run away before the spell ends?

Would this be valid according to the language of the spell? If not, what is the correct way to resolve this?

My question has split my team in the middle, so I’m here for more opinions. We have this Gantt Chart where you can extend/shrink tasks by hovering then dragging them from start/end. When this interaction starts, a tooltip appears with the information on the active edit. 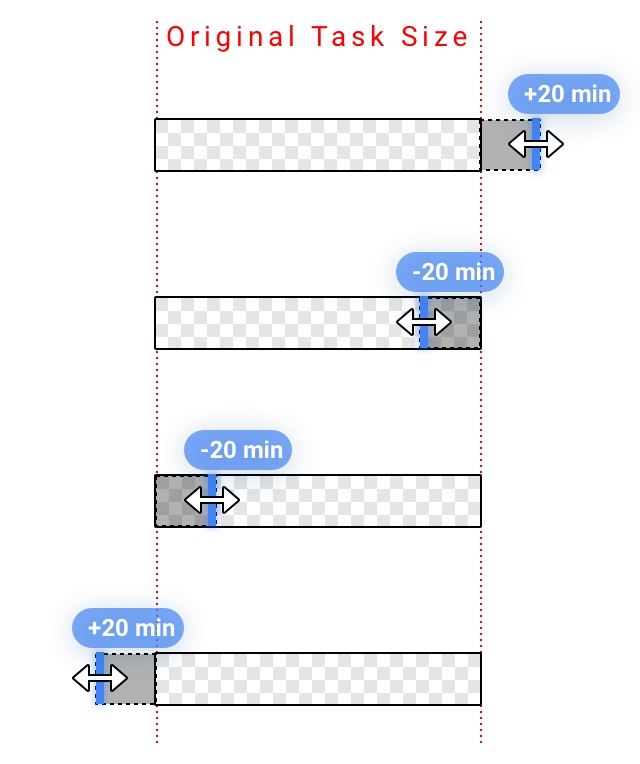 So our main issue is with the interaction from the start of the task. Should the tooltip show Duration as in the example, or should it show the relative Start Time? (That would mean the last to tooltips would be – 20 min / + 20 min)

Thank you in advance 🙂

Note: I’m trying to make it as small as possible, this is just one feature of the chart, the overall is a very crowded UI.

I’m troubleshooting a performance issue in a SQL Server DR environment for a customer. They are running queries that consistently take longer in their environment than our QA environment. After analyzing traces that were performed in both environments with the same parameters/filters and with the same version of SQL Server (2016 SP2) and the exact same database, we observed that both environment were picking the same execution plan(s) for the queries in question, and the number of reads/writes were close in both environments, however the total duration of the process in question and the CPU time logged in the trace were significantly higher in the customer environment. Duration of all processes in our QA environment was around 18 seconds, the customer was over 80 seconds, our CPU time was close to 10 seconds, theirs was also over 80 seconds. Also worth mentioning, both environments are currently configured to MAXDOP 1.

The customer has less memory (~100GB vs 120GB), and slower disks (10k HHD vs SSD) than our QA environment, but but more CPUs. Both environments are dedicated to this activity and should have little/no external load that wouldn’t match. I don’t have all the details on CPU architecture they are using, waiting for some of that information now. The customer has confirmed they have excluded SQL Server and the data/log files from their virus scanning. Obviously there could be a ton of issues in the hardware configuration.

I’m currently waiting to see a recent snapshot of their wait stats and system DMVs, the data we originally received, didn’t appear to have any major CPU, memory or Disk latency pressure. I recently asked them to check to see if the windows power setting was in performance or balanced mode, however I’m not certain that would have the impact we’re seeing or not if the CPUs were being throttled.

My question is, what factors can affect CPU time and ultimately total duration? Is CPU time, as shown in a sql trace, based primarily on the speed of the processors or are their other factors I should be taking in to consideration. The fact that both are generating the same query plans and all other things being as close as possible to equal, makes me think it’s related to the hardware SQL is installed on.