Players got into a diplomatic problem that they know is likely to be above their salary level in terms of difficulty. They spent one session figuring out this problem by speaking to people and performing various charisma checks to convince people they were unlikely to have a business with (roles were average, arguments were not particularly convincing). The party had no big plans, no extraordinary strategies, no clever ideas on site, but tried a very simple head-first dialogue.

This has happened in the past in relation to the fight, and the party had to think outside the box on a recent fatal encounter (one player even said, "Guys, we have to plan more and think less about it, sometimes just hacking and to cut up. "") Now it's a more diplomatic problem that doesn't seem to be as easy as doing a single charisma check and hoping it works.

In the end, the party failed to solve the diplomatic problem (although there will be room to try again with the upper hand in the future), and one of the players said they had not enjoyed the session. Player enjoyment is my top priority. But I also think dnd is best when there is risk, when you can roll the dice, when the PCs don't always win (not that I am actively looking for it).

How can I get the party to act less linearly on dialog related issues?

P: When you try to make a bad person with a lot of influence in the city smart

ON: There are ways to accuse the person, bribe people, spot them to find their weakness, tarnish their reputation, prove their wrongdoing by looking for evidence, and a number of other ways.

I tried to have a short session 0 discussion again about whether they would like to have problems related to the dialogue and they didn't seem to accept it but felt like they tried everything and didn't know what else to do. I also post-mortemed this issue and tried to provide various options that they could have tried, but I feel that the players still feel they have tried and failed and the session was "a waste" (although they're still exp, I still have loot and more action.

A bit of a clue as to how to address this issue, not just "Watch some podcasts for ideas, or read the X, Y, and Z resources on the subject."

I'm not sure who this lesson is, because in my opinion, it depends on when you publish the ticket. If it was a weekend, the lesson is alright for you.
I try to understand the provider, ok. PayPal refund, it is not so "cheap", but it is strange to kick old customers and lose future money.
If it were me, I would say "sorry" and would not lock the account.

But this is a story from one side, without knowing the other side, it's hard to say more

• "There is no evidence!"
There is a mountain of evidence. Contards just ignore it. That's their problem, not ours.

• "Innocent until proof of guilt!"
This means that we do not arrest or punish people for a guilty verdict. That does not mean we have to believe in their innocence.

• "But Clinton!"
Clinton was charged. Derp.

• "But Hillary!"
Hillary said no for eleven hours and the Republicans could STILL charge her nothing. Trump would not take 11 minutes.

I keep coming back to the instructions on how to access windows from Ubuntu, but I can not find any of the mentioned things. The system files Fat 32 or NTFS are either not available or I search in all wrong places. There does not seem to be any step-by-step guide or screenshot where to go and what to do, and I'm so confused I honestly just want to remove Ubuntu at this point. Can I do that? Is there a way to just remove it and return to what I had a few hours ago? Am I stuck with Ubuntu? Seriously pulling my hair out of here.

Somehow a parallel to this question.

My player party consists of Level 2 characters: Ranger, Cleric, Paladin, Barbarian, Warlock, and Druid. Not all are present at each session. Especially the barbarian was not present in the last two years. If that's relevant, let's play Lost Mine of Phandelver.

The cleric and the paladin are usually the front liners. Normally, I split the attacks roughly the same, either round (either one round, the NPCs attack one character, another round the other character) or number-based (a total of 4 NPCs, each attacking 2). Even if I did not, I do not feel unfair, because the party is constantly using this tactic and is actually better off than accidentally sharing fire in almost any situation.

However, the cleric is often set to 0 HP because the damage was attacked by all NPCs at the same time (as stated in the other question) or because they were just unlucky. The Paladin has relatively low HPs (1 ~ 3), but not becoming unconscious is much less frustrating, so the Paladin are doing well. The fact that the cleric becomes unconscious while the paladin is not shining seems to make the cleric feel like I'm just targeting him.

I do not think they play too badly in terms of tactics – the cleric has a decent AC (18) and HP (19 IIRC) so he can be the front (though he may be too) should not(especially if he gets frustrated if he falls down). The encounters are not difficult either – even those I've balanced for more PCs (since the adventure comes from 4 PCs and we sometimes have 5-6) were hardly deadly and done in the worst case, while the party was filled up with full resources was. Apart from that, these were normal / tough encounters.

Most of these encounters had melee enemies (such as Redbrands using sword attacks, Bugbears and Nothers – mostly double claw attacks), and the group came to them in front-to-front combat, so they did move on The front line, taking opportunity attacks, reaching the distance line, would be even less meaningful to me than a random aiming.

While "stopping to focus" seems to be a solution, it seems to be a really bad solution – both from the RP perspective of my NPCs (who force them to be more stupid than usual) and from a challenge perspective.

I tried to explain to him that I did not focus on him. I even recorded my attacks and showed that, on average, I targeted the Paladin more than him, but he said, "Yes, you attacked the Paladin after me was lowered to 0 HP" – ignoring that he got up and the Nothic The Paladin then attacked two more rounds.

I'm not sure if I should just play differently or try to talk to him or to the whole party or something. I do not want to sound rude and say, "Pup, if you want to complain that you're focused, do not be on the front line" or something like that, but right now I feel like this is the best solution – even if I do not speak I do not know how to say it without him thinking that it is even more personal if it is not so.

The workflow is set up to send an email when it is created or modified.

I googled and gave up for two days. I need urgent help. Can someone help me find out? Is it my workflow code? 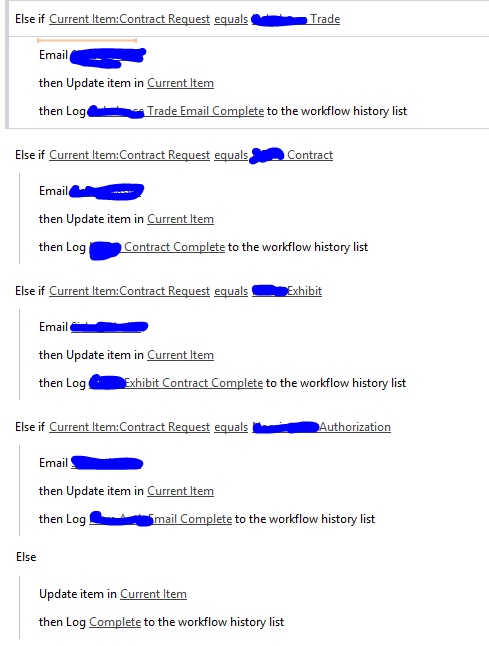 I tried to add pauses at the top of the workflow. That did not help. I tried shrinking it to remove all if / else statements and just send an email, but it still failed on a regular basis. I added the "Update Current Item" lines, and this somehow seemed to work for a while, and then it stopped again. Can someone help me find out?