I recently gave an undergraduate course on group theory (which is not entirely my field of expertise, so the following questions might have a well-known answer of which I am simply unaware). As I was explaining the concept of solvability, I digressed a little and told the class about the odd-order theorem, also known as the Feit-Thompson theorem, which states that every finite group of odd order is solvable. I made the remark: Among finite groups, solvability is the rule rather than the exception, because solvability is at least as likely as oddity. One of my students asked: “So if I take an arbitrary finite group, how likely is it then that this group is of odd order?” To which I knew no reply.

So I would like to ask the following series of related questions:

I beg your forgiveness in advance if the answers are well-known, I am not an expert on group theory.

I have the following situation:

The hole point is to add both the users and the groups from AD to Sharepoint. I got adding the users to work using the following code:

Any suggestions where I am mistaken wehn adding the groups?

How many ways can I play the dice 30 times and the sum of all throws is 105.
I started by subtracting 30 to 105, since at least the result in every throw is ‘1’ and then I use the Bars and Stars Method to distribute the remaining 75 points in 30 boxes and I get (104,75). Now I need to subtract the cases whenever those boxes get more points than 5.

I am supposed to use the Principle Of Inclusion and Exclusion somewhere, but I don’t know how to use it. I am in my 1st year at college, so I would really appreciate if you could tell me how to think when faced with this kind of problems.

I have two sql server(SQL2016) Production-1 and Production-2 under one cluster with same database.I need real-time sync between both databases simultaneously like what ever changes in either A or B database will update on both.

Note:In my database more tables don’t have primary key so replication not working for me.
Using Mirroring and log shipping solution also not suitable for me because secondary database will be on Restoring/read mode only.

An $n$-ary group is a generalization of the usual concept of a group where the binary operation (2-argument operation) is instead an $n$-ary ($n$-argument) operation. More info here on Wikipedia.

I was thinking about how to study $n$-ary groups and realized a lot of our understanding of groups is dependent on the fact that we have a concrete linear representation theory of them. I.E. a group $G$ can be thought of very concretely as collections of matrices, and then abstract questions about the group $G$ become concrete questions in linear algebra/algebraic geometry about the set of matrices, and sometimes that makes the questions tractable.

There is a generalization of the concept of a matrix to a concept called a hyper matrix (it’s an $N$-dimensional array of numbers as opposed to just 2 dimensional). And these hypermatrices support a very natural $N$-ary associative multiplicative operation on them (made by splicing the $N$-dimensional arrays of numbers into $N-1$ dimensional subarrays across each index and the taking dot products) , making them a ripe candidate for generalizing linear representation theory to the $n$-ary world.

It appears people know about this nice multiplication property, at least according to the answerer of this post.

Does anyone know if such a project has been conducted before? and if so what are some papers/humans to get a general idea on the status of the field?

Visualization of the multiplication protocol for three 2x2x2 hypermatrices, to compute the first element of their 3-ary product: 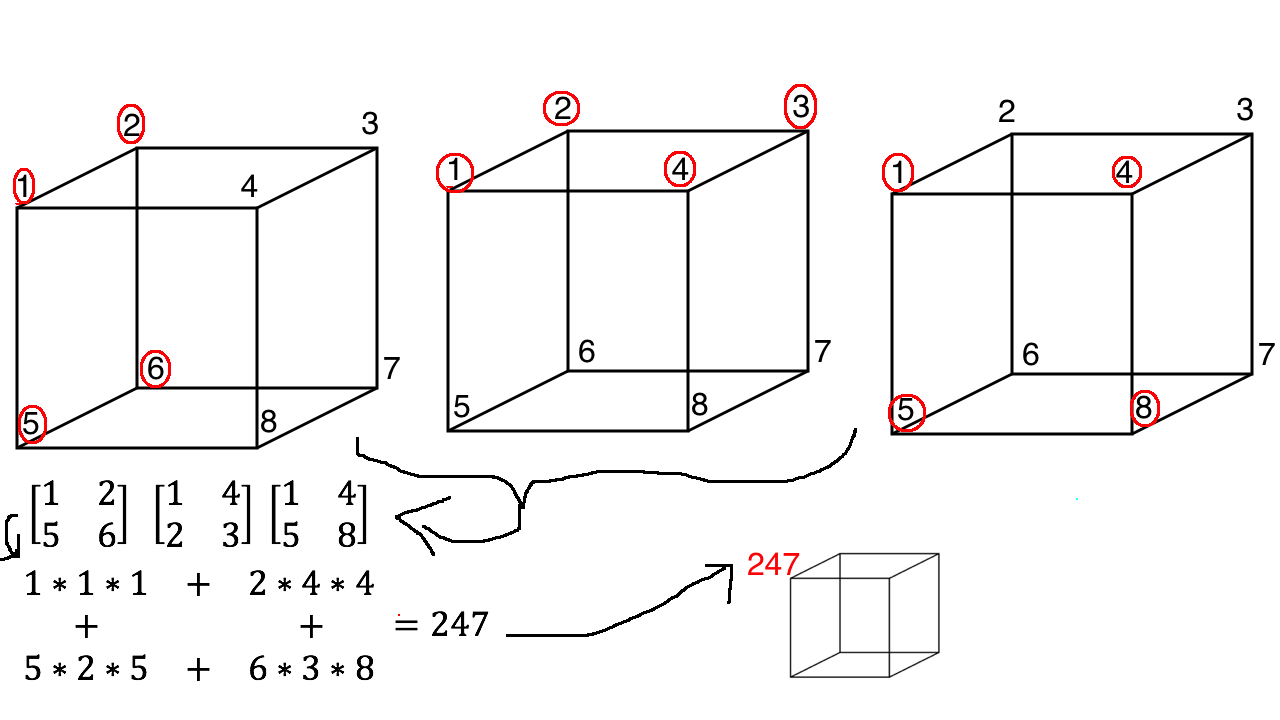 I think manufacturers list the number of elements it just so you know how much effort they put into a lens!

There’s no simple answer to whether more of fewer elements is preferable. More elements generally means greater correction for distortion, chromatic aberration etc. however this extra correction might be necessary due to the design or the performance characteristics of the lens, not a sign of better image quality. Elements are often paired up, so the number of groups gives you a better idea of the number of corrections.

Now stop both down to f/8 and the II would almost certainly be sharper. But which is better? You can’t really say, because the first version has an ultra wide max aperture. It’s a high performance lens which necessitates a lot of optical correction.

Even comparing the degree of correction can be misleading. You’d think that a better corrected lens is preferable, but it can lead to other defects. Correcting for spherical aberration in particular often makes the bokeh worse (which is why some lenses leave it uncorrected). Lens design is all about compromise.

So in summary, the number of elements/groups can be informative, but it’s very rarely an absolute measure of quality or a reason to prefer a specific lens. The more important factors are the inclusion of special types of glass, such as low dispersion, (extra low dispersion) or flourite elements, and aspherical elements which perform better but are harder to make.

Hi!
I need to export page post data into excel to show to which groups the post has been shared to but absolutely no idea how to do that…

Can anyone point me in the right direction?

This question was migrated from Information Security Stack Exchange because it can be answered on Server Fault.
Migrated 4 hours ago.


I hope this is the right discussion group.
Disclaimer: I’m, not a Windows/System admin but being a net-admin I have to deal with the Windows world

I’m trying to understand how to simplify my work in writing the NPS rules because MS NPS (Network Policy Server) checks if a user is in a Windows group (Security group afaik) but apparently only at the first level and doesn’t go through the nested ones.

For those who don’t know, say I have 17 OU with users in them. And there is a sec group for each OU, hence 17 Sec Groups.
Now there are 5 VPN/802.1x services (whose authentication is done by NPS) granted to some Sec groups but not to others.

To simplify I will provide a description of which group belongs is granted to which service:

Service3 is granted to Sec1,Sec5

I thought I could create 5 Sec parent groups like Secgrpserv1, Secgrpserv2, Secgrpserv3, Secgrpserv4, Secgrpserv5 in AD and then specify them in the NPS conditions of the Network Policy (instead of adding as many rules as the Sec Groups benefitting that service) because otherwise the NPS rules would explode and would be difficult to manage.

Is there a smart way (on the AD side I hope) to do this?