I was doing some machine learning with Nvidia GPU when I ran into an error that was CUDA related. I decided to reboot my computer to fix the error but when booting Ubuntu, my screen freezes. I opened up the GRUB console to see what was happening and it was freezing at

I tried to reboot again, it was recovering journal and clearing orphaned inodes until this popped up

And then froze there, only being able to manually reboot my computer.

I then tried launching in recovery mode :Linux 5.8.0-63-generic
In the grub loader, this starts ubuntu, assigns my user, mounts, and flushes my journal to persistent storage, it outputs started Load/Save RF Kill Switch Status and then it freezes.
Doing it a second time caused it to get past that and output Finished Flush Journal to Persistent Storage. at which point nothing happens and I can’t do anything.

I have also tried following this article : https://itsfoss.com/fix-ubuntu-freezing/

Trying nouveau.noaccel=1 ends up freezing on

Finally replacing quiet splash with noapic noacpi nosplash irqpoll causes a black screen where nothing comes up after waiting 10 minutes.

An important note is that I had an update that I hadn’t applied yet.

Other things I have tried:

I then finally tried booting with init=/bin/sh and I have access to an shell finally but I am at a loss at what I should start doing.

I remounted my drive, and ran systemctl enable debug-shell.service which created a sym link and is supposed to give me access to a root shell from an early point so I can check systemctl logs. I also tried running fsck -f / and fsck -f /dev/sda8 to check my disk but it said

I reboot and boot in using the normal ubuntu and after pressing ctrl + alt + f9, a root shell comes up with my user but I only have a few seconds before it freezes entirely again.

What is causing this issue and any suggestions on fixing it?

I installed with my root pool as rpool before the installer had the option.

My main HDD bit the dust, so I’m now in the process of resilvering and in the meantime I am reinstalling grub on the new drive. Unfortunately I cannot get ZFS to be properly detected. I get the dreaded error: unknown filesystem. error from grub.

Note that I don’t think it has anything to do with resilvering because I am probing an existing (not new) device.

You’ll see that it passes all checks except #12 which seems to be the feature check. I don’t see any feature error in the log however. I have all the 0.8.3 features enabled.

Can I force it to detect as ZFS, or is there a way to fix grub?

I recently uninstalled Ubuntu from my dual boot, so I could change some partition stuff, but even after deleting the ubuntu folder from the EFI folder, a blank entry still appeared on the boot menu. I tried to reinstall Ubuntu with my new partition setup, but it gave me an error relating to grub fails to install. I’m not sure why I got this error saying that I deleted it from the system partition. If I try to boot into the new Ubuntu boot entry I get greeted with the grub Bash, rather than a boot menu. Any ideas on how to fix this?

I made some research as im a new linux user and found some fixes for the GRUB which i did and successfully completed
sudo apt-add-repository ppa:yannubuntu/boot-repair sudo apt update sudo apt install -y boot-repair boot-repair

i figured this might be a progressive process that I should wait to load but it just sits there on those numbers for hours till my battery dies.

When I did the GRUB repair i logged the process to pastebin link => https://paste.ubuntu.com/p/Z4Jz9SYsk3/

I still have the media I used to install ubuntu 18.04 LTS though I cannot afford to lose the data and therefore cant reinstall the OS until all options are exhausted

I have a dual-boot system with Ubuntu 20.04 lts and Windows 10, yesterday my Ubuntu stopped and every time I try to boot give me this error:

I was trying to start ubuntu on an USB-live, install and run boot-ubuntu and on the first try I was not abble because Windows was hibernating, so I boot on windows, did some commands and shutdowned to not Hibernate.

But now I`m getting this error

IDK if have some relation, but my GParted is warning on /dev/sda2 Microsoft reserved partition

I don’t know exactly what is happening but I have some ideas.

I already tryied to load ubuntu on recovery mode and put that ‘nomodeset’ thing, but nothing change.

I got to the part that instruct me to put some commands on the cli, but the repair failled.

That is the Error Url

IDK more what to do.

I have tried to follow the instructions mentioned here in order to activate hybernation on my Ubuntu 20.04.2 LTS system.

However, I could not do it because in my fstab file the swap line does not provide a uuid as you can see below:

Does anybody have recommendations?

My VM box all of a sudden stopped working. When I start the system the following message appears. 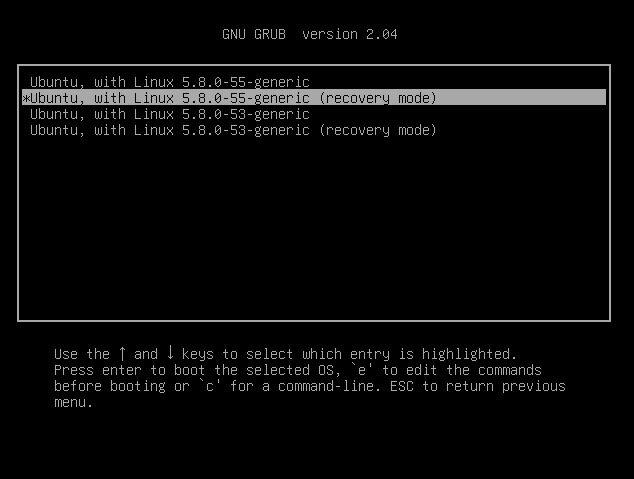 Then either initialization options retrieve the same error as bellow. 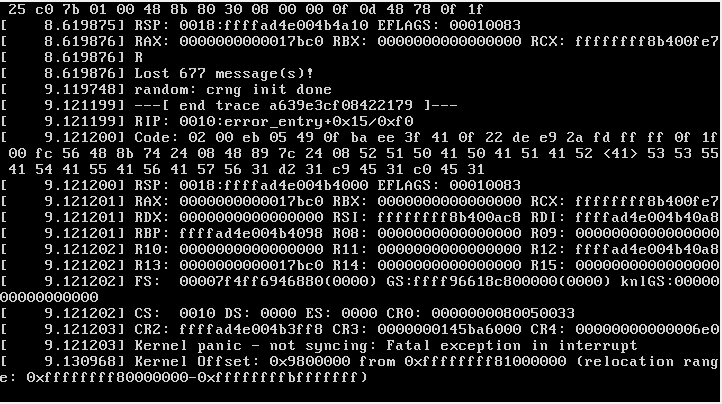 I suspect it is because I ran out of space on my VM box storage because I’d been receiving a notification telling on the short space (500mb left if I remember correctly) but unfortunately I could not make any remove command on the grub shell.

I do not mind losing the entire machine, apart from my www/ folder, so some possible solutions came to my mind and would be much appreciated:

Delete some files from the machine – restricted to the actions of the grub.
Manage to recover my www/ folder to another Linux ubuntu server.
Be able to get to cmd and perform the apt-get autoremove – or something similar.
Any other idea is also welcomed (given the desperation state I am in now)

I’m fairly new to linux and I was trying ti install samba in order to use to share files with a Windows 10 qemu/kvm virtual machine. Samba though wouldn’t be installed and I couldn’t figure out why. Searching through the forum I stupidly followed some guy’s instructions where he would autoremove some library but with the --purge flag.

Almost immediately I realized that wasn’t a wise move since it had started removing libs like pulse audio and gnome. I wasn’t worried because I found in the logs the libraries that had been removed and I was in the process of writing a mini C++ program to take the log file as input and generate a bash file to re-install thise libraries.

Meanwhile though I had to move to a different location, so I closed the lid of the laptop. And from there things went south. When I reopened the lid, the screen wouldn’t let me authenticate (keyboard was inaccessible and the login couldn’t receive any input), so I had to reboot, hoping for a miracle.

Needless to say that the miracle didn’t came. I’m in the process of taking a backup through the SupportAssist OS Recocery that Dell ships with. I also have access to grub.

Is there any way to save the situation without freshly reinstalling the OS?

Running ubuntu 16 from vmware. Login was failing, so i reset password following grub recovery.
Even created a new user/password. Neither user/password combinations work from the login screen.
I see many people are having login issues. I’ve tried everything mentioned online and no success.
Does anyone have any ideas or have they successfully recovered. Or does anyone have a recommendation for recovering my files? I can see them from grub and the passwordless root shell. but I can’t seem to find a way to copy them to another device.
Any help would be appreciated.