For a character that is wearing heavy armor, but does not have the prerequisite strength, there is a 10ft speed penalty.

If the Armor table shows “Str 13” or “Str 15” in the Strength column for an armor type, the armor reduces the wearer’s speed by 10 feet unless the wearer has a Strength score equal to or higher than the listed score.

Haste doubles the speed of the person it was cast on.

Until the spell ends, the target’s speed is doubled

Focusing on the mathematical mechanics of the question, we need to examine the differences in properties between the options.

Mithral lowers the category of armor for the purposes of movement by one step, increases the Max Dex by 2, and reduces the ACP by 3 (4 for masterwork, which would be the case also for any magical versions). If you are trying to maximise AC, you’d likely also be using at least a Heavy shield +1, for another +3 AC, and another -2 ACP. a Mithral shield would reduce the extra ACP to 0. So, Mithral +1 with heavy mithral shield +1 would give AC of 25 and Mithral fullplate +1 with heavy mithral shield +1 would give AC26. Touch ACs would be 15 and 13. Your speed would be 30′ in the breastplate, and 20′ in the fullplate. ACP would be 0 or -2. Most other AC buffs would then stack the same on top of either of these options, although further increases in Dex wouldn’t help much.

As you can see, the overall differences are minimal between the two options, for a considerable difference in cost. The major difference is in the base movement speed, which may or may not be an issue, depending on if you are mounted, and how often you have buff spells like Haste or Fly available.

For comparison, you can look at the monster stats by CR, and you will see that even the Low Attack option will be hitting AC26 at least 50% of the time by CR12. By CR20, you would need at least another 15 points of AC to give the high attacks a 50% chance to miss.

You touch an object that weighs no more than 10 pounds and cause it to become magically fixed in place. You and the creatures you designate when you cast this spell can move the object normally. (…)

(…) a creature can use an action to make a Strength check against your spell save DC. On a success, the creature can move the object up to 10 feet.

The two phrases I am interested in here are:

You … can move the object normally

Can an object under the effect of a 6th level immovable object spell still be moved normally while it is carrying up to 20,000 pounds?

I purchased a SanDisk Extreme Go 64GB USB from SanDisk about 2 months ago.

Out of the box, it performed as advertised, with 4k r/w being really good.
Since it was faster than my HDD, I decided to use it as an everyday booting device for windows 10.

I recently noticed that my system was unusually not responding, so I check the write speeds on the drive and they have fallen dramatically.

When writing, active time would reach 100 percent and task manager would display writing speeds between 4 kb and 100 kb.

I am aware that once flash memory cells have all been written to, the write speeds slow down.
So, I tried multiple methods in hopes of performing a “Secure Erase” on the flash drive.

After performing these, the drive would be reasonably fast for the first bit after I write data to it. However, these results were inconsistent which led to the conclusion that nothing had really done anything.

I assume the cells have been all written to for a while before I noticed this slow down ( had to reinstall windows completely a few times ), making me wonder if something else went wrong.

If anyone has any other ideas about what I could try to perform a Secure Erase or if anything else could be wrong, please share this information with me.

Agile parry cannot be used as a bonus action:

If you make an unarmed strike as part of the Attack action on your turn and are holding a kensei weapon, you can use it to defend yourself if it is a melee weapon. …

The latter part, using one’s Action surge to gain an additional action, and using it to attack with dagger, sheathe the dagger, attack with greatsword and use Flurry of blows, is legal.

I’ve been wondering about what is a perfect use case for CQRS where the benefits overcome the complexity and the cost with come with the package. So for me to better understand it, I want to share with you a theoretical use case and we can see together whether it’s a good CQRS fit or not, and if not what alternatives would be good in this case.

Let’s say we have the following very simple model:

As
we can see, we have departments which have multiple students where they can pass exams on subjects which are classified into categories. Very simple.

Let’s also say our solution have a screen where we want to display all these information. Here’s our ugly UI for this page:

As you can see the information shown in the table must be extracted from all the entities shown above. So we have a lot of joins.

Supposing that our client have w very successful online school with millions students. And they do not tolerate performance issues, so the solution must be as fast as possible.

It’s clear that there are multiple joins when displaying this page, so to improve the overall readability we went ahead and started experimenting on CQRS.
We need to add a new database for read operations which stores all the above information in a single row, so the read model for our view is as follows: 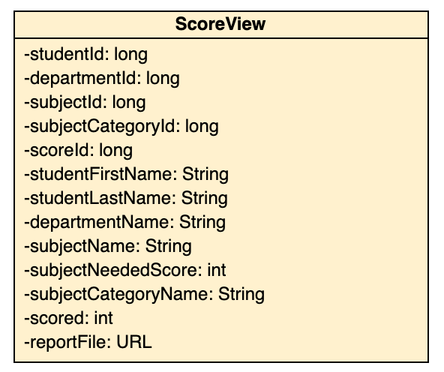 This will definitively make reading faster but it will also make thing more complicated. For example, we need an event source to publish event that sync the read database with the write database, etc…

So my question is, in this particular use case, is CQRS beneficial ?

We had some event processing being done with a cron job calling to a web API, but it turns out we need to scale this out, way out, because our event message quantity is growing, and the web API we have been using is reserved for realtime execution use cases. So we set it up with Amazon SQS queue being read into an AWS Lambda function, which scales out the processing. The problem that we’re running into is that the processing is not very small, there are seven or so tasks that processing entails including integration with S3, ElasticSearch, parsing and mutating data, custom web API invocations, SMTP/email, etc. Since these integration points involve related integration dependencies, the payload size just for deployment in a .zip file is more than 50MB, which exceeds the maximum size allowed for Lambdas. If deployed, it would take about 40 seconds to set up each instance and again as much to complete each message. Lambdas, we are reminded, are intended for really small, lightweight, “do it and quit quick” type of tasks, not moderately heavy handed processing, so I suppose Lambda was not the right choice for us.

It occurred to me that I could have the Lambda call the web API again, or call a new web API app just for this purpose. But then that web API would end up needing to scale up, not out. We want to automatically scale out, which Lambda gave us.

We know we could also chunk the processing into multiple stages so that Lambda is indeed staying simple, there would just be multiple Lambdas instead of one, but that would also mean more SQS/SNS queues/topics, and I am trying to avoid building a Rube Goldberg machine.

There are so many options out there that we can look at for running this processor but unfortunately so many of them seem like they will involve a great deal of hand-holding just for infrastructure/architecture setup, things like kubernetes (containerized packages), EC2 (VMs), etc. What is the best strategy for this problem?

I am in charge of building a website that organizes a bunch of text-heavy PDFs, which are created by city governments. The PDFs are formatted differently depending on the city. The goal of the project is make the data in the PDFs more accessible by first converting them to HTML documents and then giving each file its own webpage.

After making the web pages, I would like to have a mechanism to search them individually for keywords. I would also like to be able to efficiently search all of the PDFs at once to find a list of all of the files that contain certain keywords.

A model website, that contains a lot of the features that I would like is the python docs website https://docs.python.org/3/ . This has great features including highlighting the key words returned in a search.

I am not really sure where to start with this project as I don’t have that much experience with web design.

I recently purchased a Cotton Carrier system which uses a clip to hang the camera vertically from the chest area. I am using this with a D500 and a 200-500 lens, which has a tripod foot. When I am using a tripod, naturally I use the Arca-Swiss mount to attach the tripod foot to the tripod. However with the Cotton Carrier, it would keep the camera closer to my body and more stable if I could attach their clip to the body rather than then lens.

Is this an acceptable way to carry a body+lens? I understand it would not be a good idea if the lens were held out horizontally from the camera, but I don’t know the physics of it if the lens is vertical underneath the body. It is a different direction of force, but I am unsure if it is worse/better.