I have wireless/bluetooth keyboard but it doesn’t have/support my native language and it’s layout.
is there are a way to add language to keyboard language settings?
Someone help pls

I’ve noticed a behavior lately that I find rather strange. In the middle of a paragraph, if a word coming right after an opening quotation mark (like the word ‘this’ in “this short quote”) doesn’t fit in the line and so has to start a new line, the quotation mark would not be moved along with that word. In other words, the line-break gets inserted right between the quotation mark and the word even though there was no spacing there — see the screenshot. 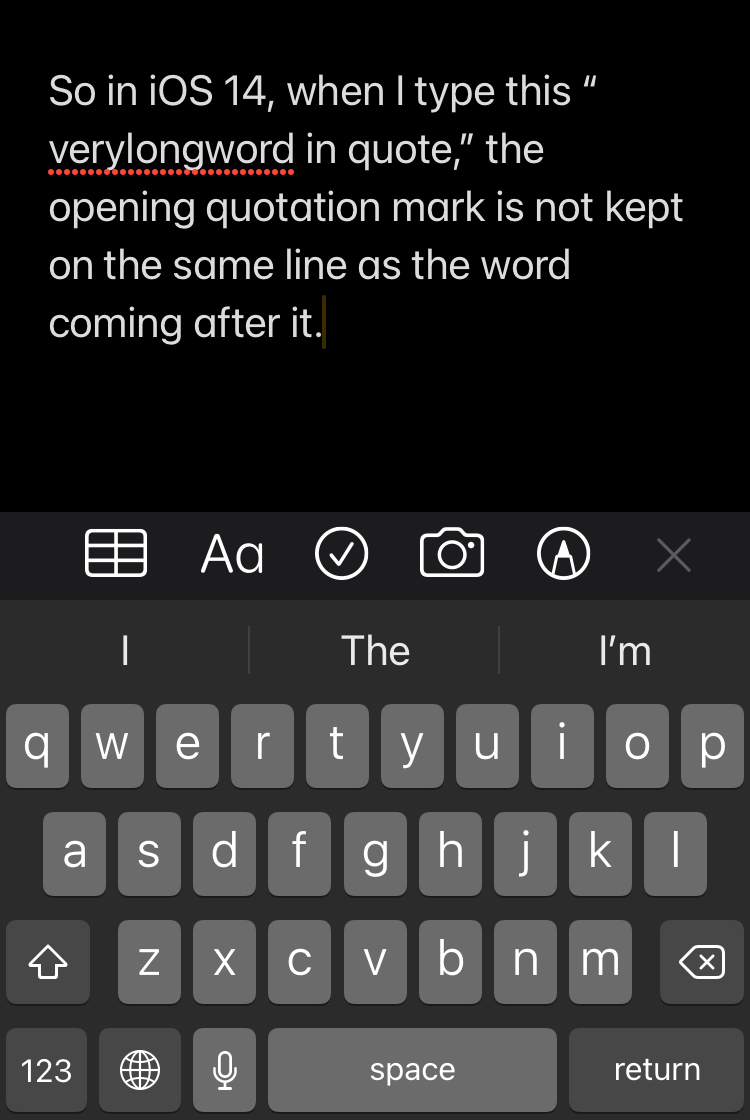 I must admit that I am a non-native, although quite proficient, English speaker, so I may just be unaware of this grammatical/typesetting rule, but, personally, that would be a weird rule.

Also, I’m not sure how old this bug actually is, maybe I just never wrote up such examples before.

The screenshot was made in the Notes app, but I’ve also seen it, for example, in iMessage or in Facebook’s Messenger: 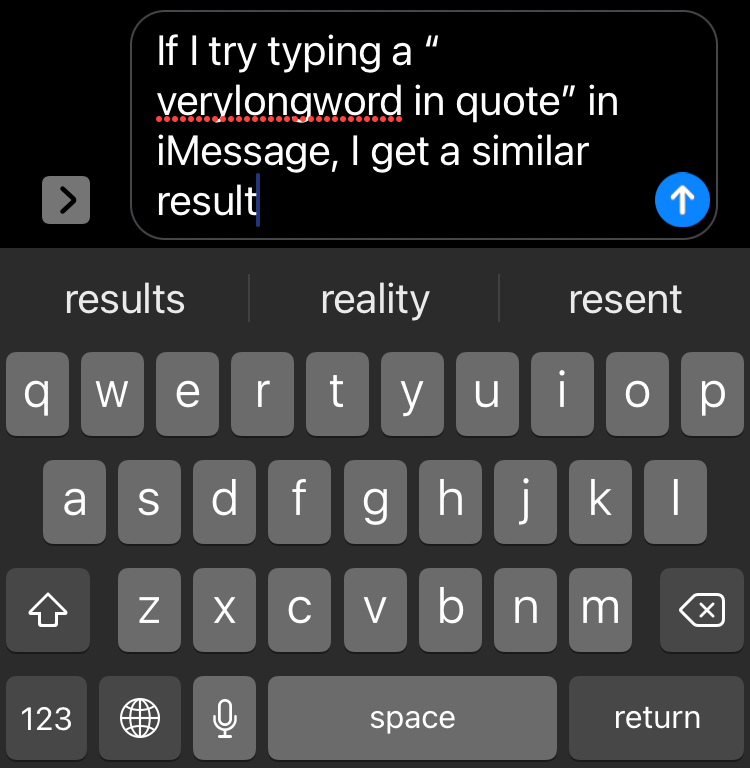 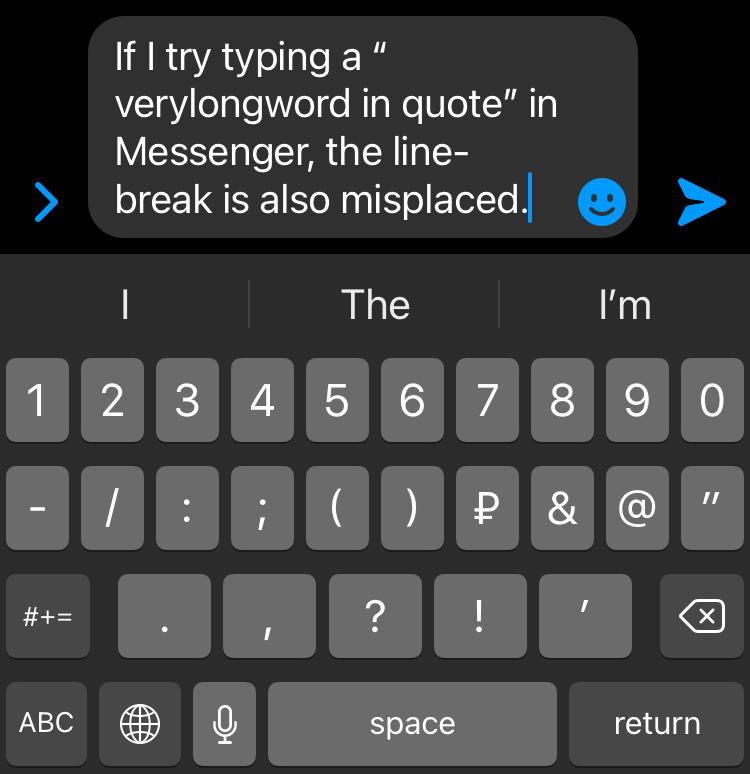 I’ve recently upgraded my phone, and have mostly managed to get the keyboard back to how it was, with one exception. When I used glide typing before on my old phone (AOSP keyboard), the middle word in the suggestion strip had a dotted line underneath that allowed me to long-press on a suggestion (‘be’, ‘a’, or ‘so’) and get a popup list of more suggestions: 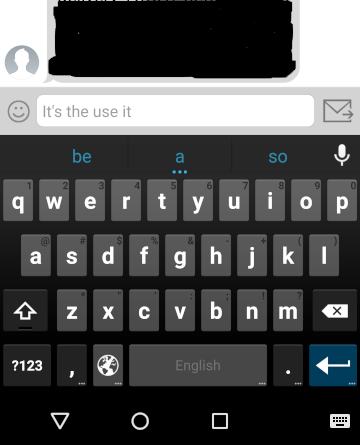 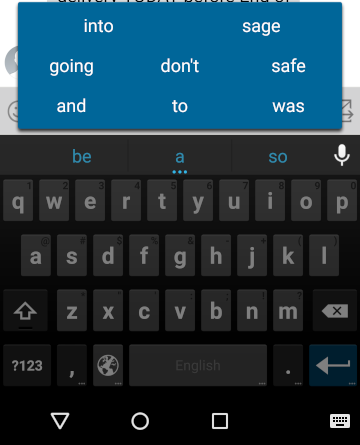 On my new phone (Gboard), this no longer happens and a long-press merely prompts me to remove the suggestion: 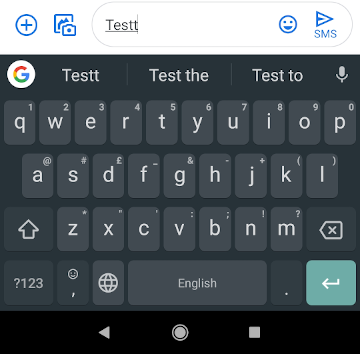 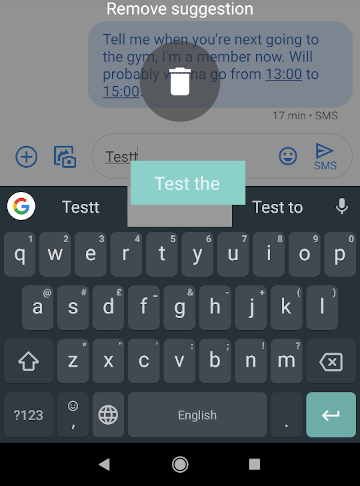 What happened to this functionality and can I get it back? Have they simply removed it? I found the former behaviour far more useful.

I would like to have a shortcut to open my terminal emulator “Alacritty”. It is installed as a mac app (.app directory) and a standalone executable. (Installed via brew)

I made an Automator action for it, which I then could bind to a system-wide shortcut in the System Settings. The desired action would be:
a) The app launches with the icon and b) opens a new instance everytime the run the action (not just brings the current window to focus).

The following things were tried but failed in one way or the other:

Are there any other options I haven’t explored? Thanks!

When you use ⌘⇥ (Command+Tab) to change to another application in App Switcher, that app is moved to the front of the stack. Is there a way to send an app to the tail of the stack, other than the brute-force technique of switching to every running app except that one?

I followed this tutorial to bind my media keys to spotify and it was working like a charm until today.

Now, when I press the previous song and play/pause buttons, it works correctly, but the next song button doesn’t work.

I tested running the commands in the link in terminal and it worked. I tested the keyboard on windows and media keys work as needed.

I believe some other software or something is “capturing” the media key action before it gets to Spotify. Is that possible? If so, is there a way for me to see which software responds to each shortcut, to see what I can do about it?

When I’m using Messenger on Chrome, this triggers text replacement and becomes “2 like-you arei”. This doesn’t happen on StackExchange, but it does happen on Messenger.

Text Replacements work on apps that utilize the Cocoa interface. This means any Apple application and any third party app like Chrome, will have text Replacements compatability.

To better control the replacement triggering as well as gain functionality whether or not you’re using a Cocoa based app, you need an an app like Text Expander ($3.33/mo) or aText ($5). Both can be configured to use a short cut, a hot hey, or delimiter (like Tab) to trigger it. So in your example, you’d have to type “ur” followed by Tab for it to trigger. Firefox, however doesn’t support it.

An alternate method would be to put a special character in front of your replacement pattern like a tilde (~) or a an exclamation mark (!) as its highly unlikely you’ll ever type that sequence of characters as a “normal” sequence. This has the advantage of being free, but you don’t get the increased functionality of the 3rd party apps like customized triggers and universal availability (not limited to Cocoa based apps)

As the title discribed, is there a way to adjust Windows touch screen keyboard’s size when on tablet mode?

I’m running latest Pop OS using i3 as my window manager and Gnome is also installed and
I have configured 00-keyboard.conf for layout (us,ru) and switching method and using gxkb as indicator.I also need to load a modified Xmodmap in i3 config for more intuitive layout.So in Gnome everything works as it should, but in i3 loading Xmodmap adds an extra keyboard tap to cycle through the layouts. For example, without xmodmap , one tap – ‘us’, on tap ‘ru’, one tap ‘us’ and so on. But with loaded xmodmap it takes one extra step to get back to ‘us’. I don’t seem to find information on this. Any ideas?

P.S. It seems that gxkb stays on ‘ru’ while the keyboard already prints English letters. So keyboard switches two times to ‘us’ and then to ‘ru’ and layout indicator does the opposite – two times on ‘ru’ and then ‘us’.

I’m having an annoying issue and need your help. While typing in a text editor or chat, I can’t move my typing cursor by left and right arrows. However, if I press (command + left/right), the cursor can move to the next word. I think I may unconsciously change a setting somewhere.

Any help is appreciated. Thank you!