I work for a Product that allows users to create customs dashboards. They have the possibility to create 1-25 custom charts and the available chart types are indicators, columns, bars, area, pie, and line.

The problem that we are currently facing is that some users create dashboards with dimensions that not only bring an insane amount of data which causes performance issues but also are really hard to read and analyze.

I would like to receive some advice about how to:

I’m troubleshooting issues with image uploading and noticed that each imaged uploaded is making literally 10 sizes of varying proportion. I don’t understand why. Why are there so many resized versions and how can I limit the number of images created?

BTW I have no plugins installed and this is a nearly stock install on Ubuntu with WP 5.8. Thanks. 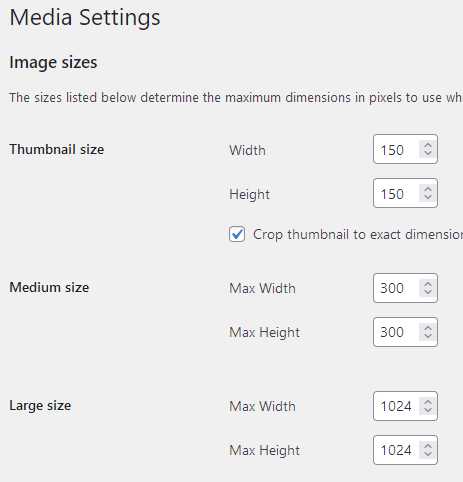 I see some alarming stories lately online, from people claiming Paypal is withholding their account balance for various reasons. I’m not talking about the “pending” state that Paypal enforces. Now, for some of the cases I read, the users were violating the Terms of Service by misrepresenting themselves as adults when they were minors, providing a false identity etc.
In one conversation on reddit a person claimed that Paypal will “use any excuse they find to keep your money”, but I’m not sure how biased that view is. I guess that makes sense in a way, since it’s a profit-geared service not unlike a bank, and some banks do this all the time.

Other things that can trigger a freezing or putting a cap on how larga amounts you can process per transaction, like making sudden purchases or transfers with large sums of money. In some cases people who launch their enteprises may be faced with this problem.

Series of chargebacks, bad reviews by other transacting parties, strange IP logins, suspicion of earnings from providing illicit content, products or services, or a bad credit score can be other reasons that attract Paypal’s attention to your account.

There are instances of people receiving a 6 month balance-lockdown on balances worth thousands of dollars. While they rarely do this for periods of time >6 months, that small timeframe can be detrimental to people who pay bills through Paypal, or have their entire earnings and savings handled by Paypal.

This is related to one of my previous questions here.

Any help will be appreciated. Also is any result for general $Omega$ known? Thanks.

One way to handle this is to give them quests that explicitly have timelines. If they go resource harvesting, they lose the quest.

This is similar to what you described with the demon attack but somewhat different. At least as I understand your description, you used a living world and the players suffered consequences for not being around. That is fine and good, but it doesn’t directly apply time pressure. It wasn’t a situation where the players knew explicitly that if they chose to go harvesting resources that there would be direct and clear consequences.

If you give them a specific quest with a clear timeline, then they have they have to make the choice of which to do.

I’m reading between the lines a lot, but it sounds like your players are spending a lot of in-game time harvesting these resources.

I would tell the players that now that their characters are familiar with the process of harvesting those specific resources that they can just do it as a downtime activity. They can, whenever they choose to invest the time, spend X days to acquire Y amount of the crafting resources.

Of course, the ratio of X to Y should be much worse than adventuring time would be. While the occasional prospector gets rich by literally striking gold, the laborers doing the mining tend not to be well paid compared to the fabulous wealth an adventurer can pursue.

In fact, if the players already have reasonable wealth, you can point out that it might be a better use of their time to hire people to handle the tedious process of gathering the resources now that they have staked a claim in an area and they can just sit back and receive the resources on a regular basis without it impacting their adventuring.

I think in this particular case you can avoid a direct discussion if you want to. You can nudge things by applying time pressure, making most resource gathering a downtime activity, and having a lot of common crafting components available on the market.

But if that doesn’t work, it is fine to directly tell the players that this particular part of the game is getting tedious for you. Everyone should be having fun at least most of the time, and if something is getting too tedious for someone then its time to address revisions.

You can then directly discuss options for how you want to change it.

Does anyone know if it’s possible to create an organizational policy that would prevent the use of having a source set to ‘any’ for specific ports on firewall rules in GCP?

Fo example, I want to prevent users from creating firewall rules that use ‘any’ as a source for ports such as SSH, RDP, SQL, and so on.

Despite the SOAP documentation seemingly always showing v1 and v2 being the same with the exception of how you call a method and there being a ton of example of v2 calls. I cannot seem to get this to work in v1 of the SOAP API

I’ve tried all variations (I feel) and have had some luck in limiting the return to basic values, just not the ones I’ve requested.

How should I be calling a v1 SOAP API catalog_product.info to limit the returned attributes.

NB: I’m using v1 because of the multiCall method as this is ultimately used for a product sync.

I’m wondering about the surjectivity property for $nmapsto infty .$ If we
assume that $underset{nlongrightarrow infty }{lim }det (A_n)neq 0$ do we
obtain that the limit operator $K_{infty }$ is surjective?.

Let’s say that – as a mental exercise – I’m building a simple CRUD system from first principles.

We’ll assume that my server process has got a way to authenticate the user associated with each request.

But then, what is to stop an authenticated user from turning adversarial and bombarding my system with requests to instantiate a new object of some type, until either the memory or the storage is exhausted?

My first thought is that each user should have some kind of object creation quota.

I’ve been looking through books on security and application design, and I can’t find any advice on implementing such quotas.

There is this bit of advice on the Common Weakness Enumeration:
https://cwe.mitre.org/data/definitions/400.html

But it just says that the solution is to recognize the attack and disallow further requests from the user. Then it acknowledges that this can be quite challenging.

It also touches on universal throttling, which is a possibility. But I still can’t find much advice on how to impose a logical limit on the number of requests per user per (minute? second?) that my server will handle.

Are there any published sources that describe a solution to this design issue, or any generally accepted advice?

I’d like to set up a systemd service so that it restarts quickly at first, but slows down after a short while. The reason is that a service might temporarily fail and come back up quickly for highest availability. But should the issue persist longer, this will generate lots of log entries. In that case the restart interval should be longer to not cause such a load but still come back if the issue resolves at some time.

This is my current service file:

The test script loops as long as /root/test.run exists, then exits with an error code. I can cause the service to fail by deleting that file.

This is what I observed:

This clearly isn’t a rate limiting, it’s just a limiting.

What do I have to change to get a rate limiting? After 4 restarts within 120 seconds have failed, the service should still try to start at a lower rate.

Running on latest Raspberry Pi OS, but this should apply to any Linux OS with systemd.