The Macintosh menu bar is certainly preferable to me, and there are some good arguments for (and against) its use.

The main argument for a persistent menu bar across the top of the screen is that it becomes an infinitely-large target along the top edge, which according to Fitts’ law makes it much faster to target with the mouse. It’s also notable that in Windows (which, as you probably know, still uses per-window menu bars), many core applications are losing their menu bars entirely behind drop-down menus and disclosure arrows (see Internet Explorer, Windows Explorer, etc.), which makes finding things like the Edit menu (for copy and paste) much harder for users who haven’t memorised the keyboard shortcuts than it once was.

The main argument against a persistent menubar is that it makes the interface inherently modal. While I have a specific application focused, I’m in that application’s “mode”, and I am forced to actively change application focus before I can interact with the menus for another application. If I have a word-processing document open and a web page open in a web browser, it’s not always immediately obvious which has focus (which can make choosing things like “Window > Minimize” have unintended consequences). It’s worth noting that even without a persistent menu bar, desktop window managers tend to be somewhat modal since keyboard shortcuts (e.g. for copy and paste) only apply while a given application (or document) window has focus. Since that limitation seems unsurmountable, perhaps making the interface seem more modal is a good thing (and could explain why Windows users tend to run their applications fully maximised much more often than Mac users do).

It may also be that on today’s 20-inch-and-larger displays the distance between the window you’re interacting with and its menus is too great (the original Mac had a 9-inch screen with a resolution of 512×342 pixels). Compare a modern Mac’s resolution (the one I’m typing on is 1920×1200) with the one below from Computerhovel.com — the distance of the window from the menu bar could never really exceed 100 or so pixels. 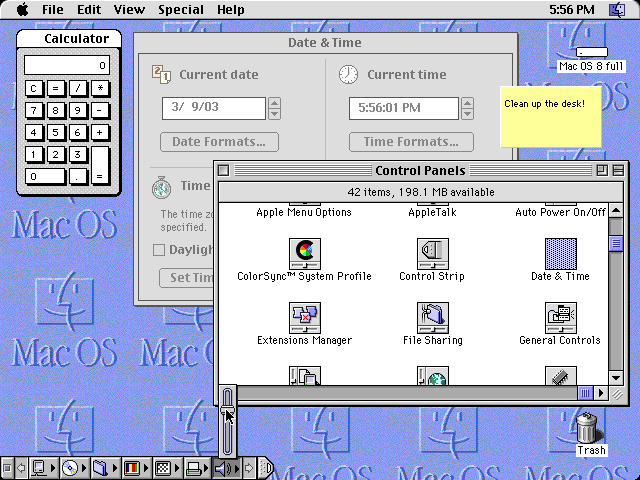 Here’s a great blog entry by StackExchange’s own Jeff Atwood about the relative pros and cons of the Mac menu bar that touches on a few of my points and adds a few more.

Background
When menu bar items are rearranged using Cmd+drag, macOS writes a new “preferred position” preference to each app that is showing a menu bar icon.

This helps, but does not guarantee, that they retain their position for subsequent launches.

Question
How can I script the repositioning of a menu bar item (which will trigger the system to write the new prefs)?

Or, how can I trigger macOS to write the new preferences directly (without scripting repositioning of a menu bar item)?

I do not want to write the preferences myself.

I was listening music on Youtube Music, and noticed a new entry on Google Chrome’s menu offering to Install Youtube Music.... 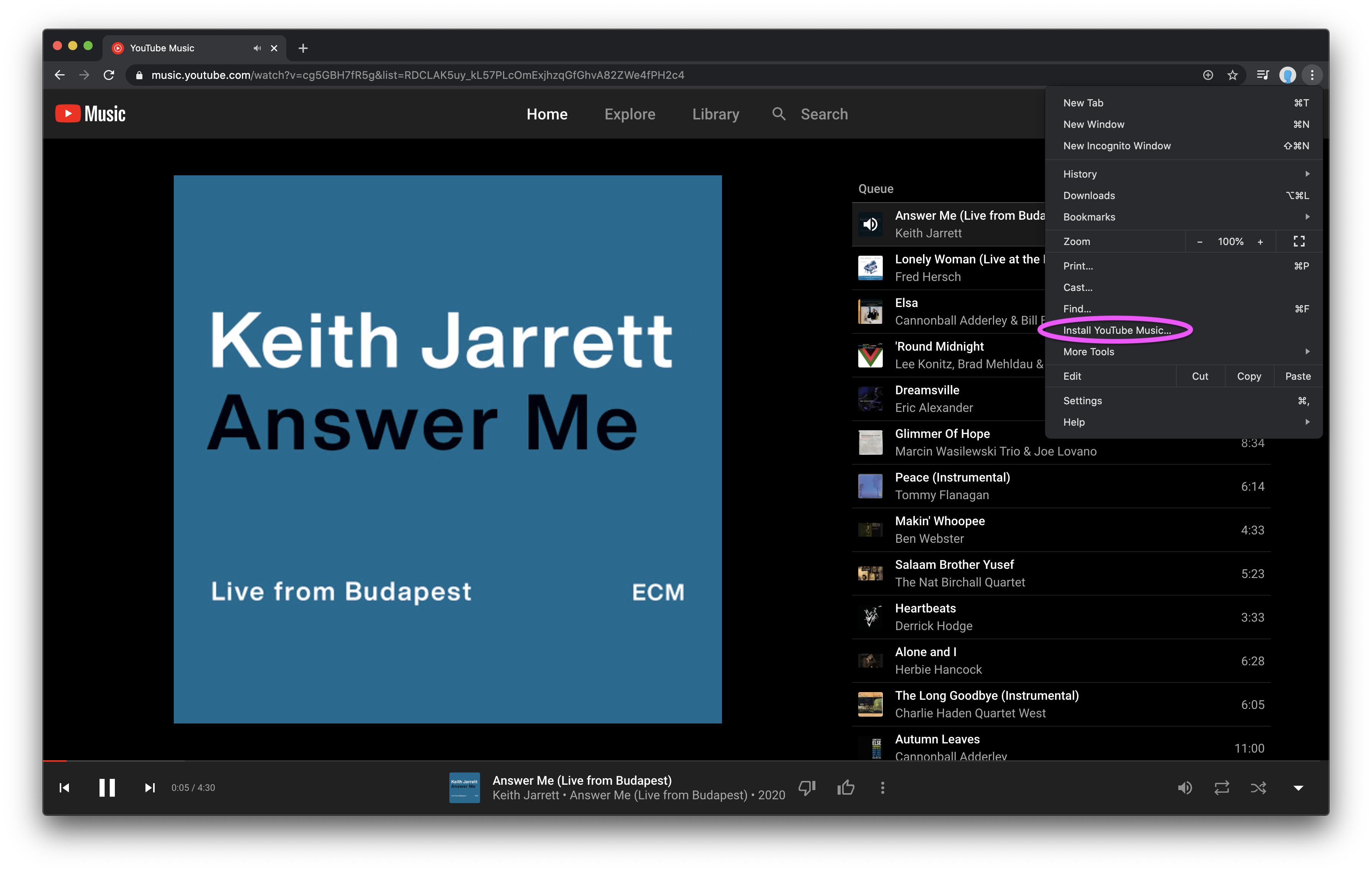 This option does not appear on non-Youtube Music pages, or in an incognito session. 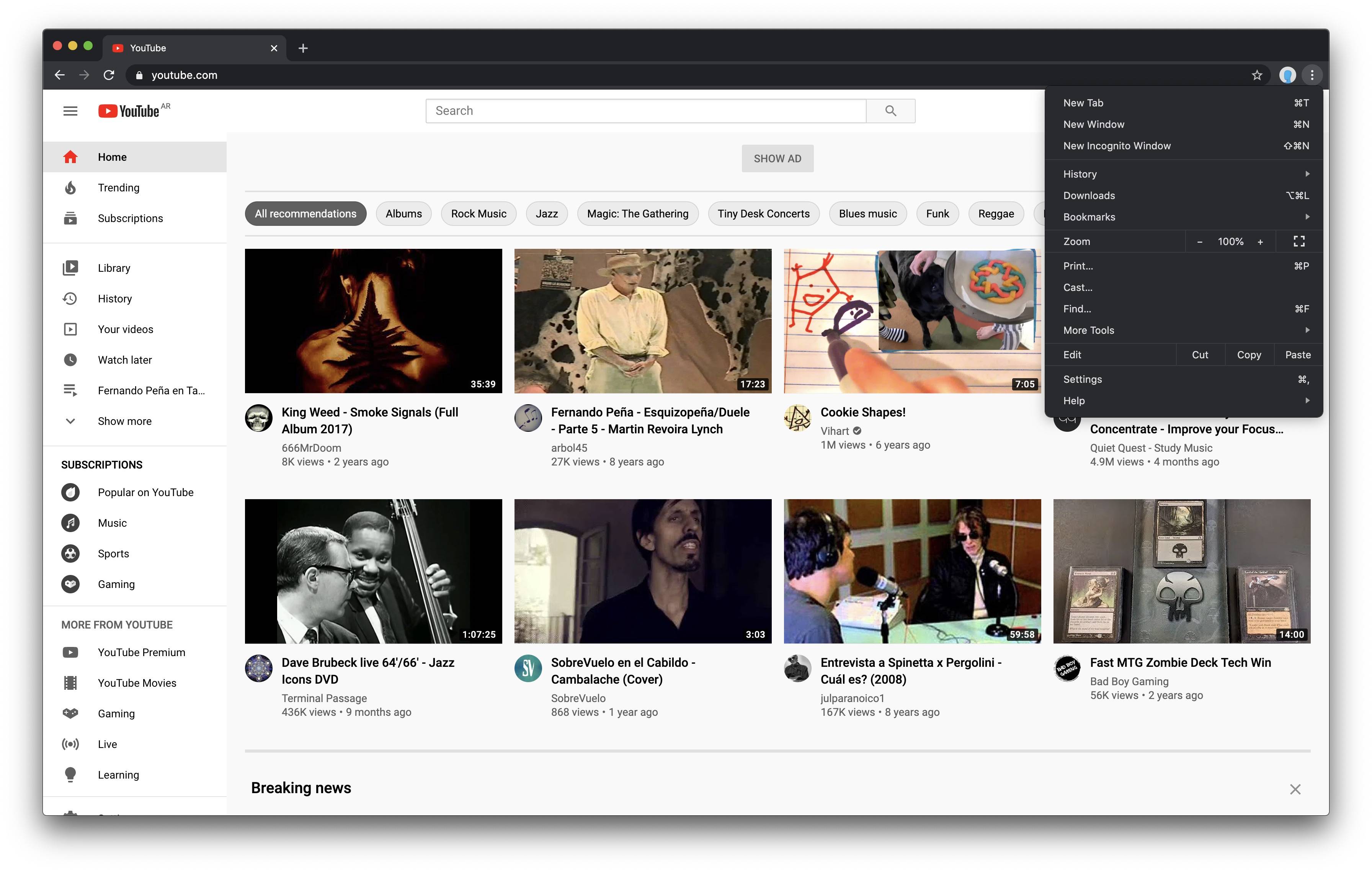 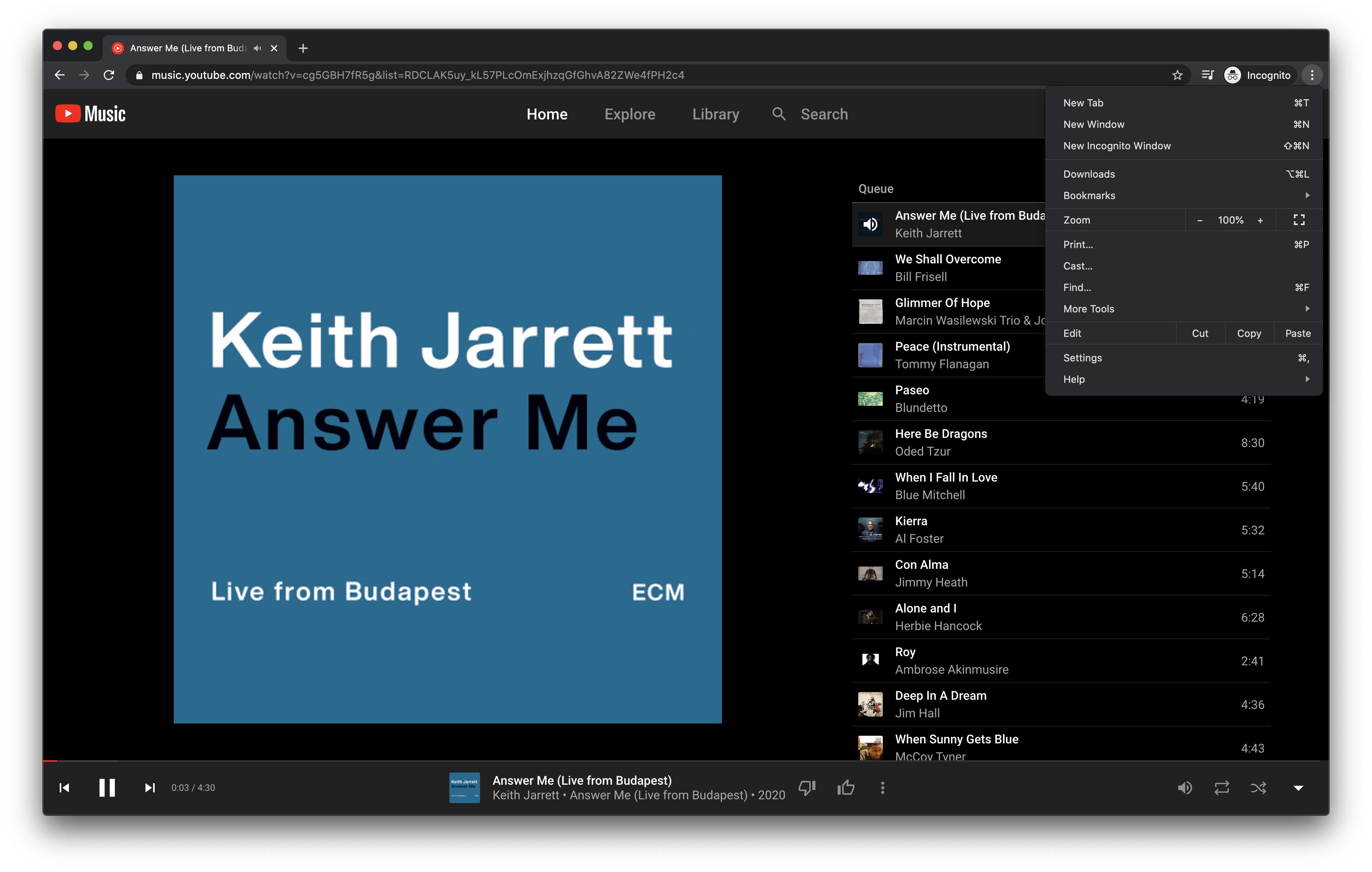 The entry isn’t available in Firefox, either: 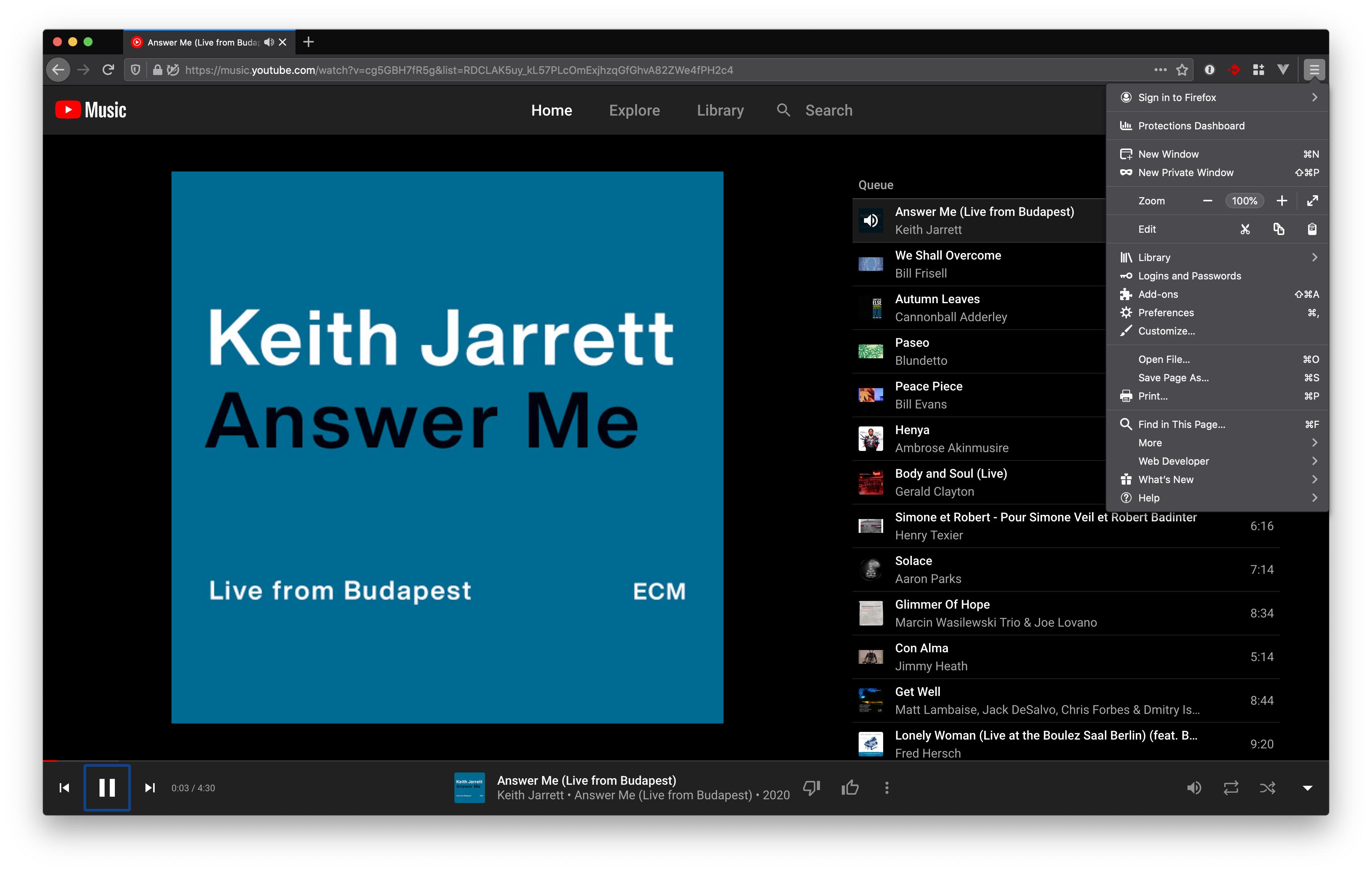 Does the website declare the availability of that menu entry somehow? Can my own website add any such entry to Google Chrome’s menu? Are there any other such entries that can be shown in Google Chrome?

The screenshots are all on macOS, but this entry shows up in Google Chrome for Windows, too (haven’t tried incognito or other browsers in Windows).

Is there is any alternative way to make token to work in the Drupal 8 menu link field other than Menu Token module. I want to use token to set as a default value when I am creating new menu, but if I am using Menu Token module, first, I don’t see any option in the node form to enable the token menu. Secondly, I have to manually enable the token option for each menu item under Admin-> Menu after creating a node which I don’t want to do.

I am trying this in Drupal 8, any suggestion would be helpful

I want to populate the drop-down menu items of the CF7 from another database. The reason for this is that there might be a large number of items that might dynamically change every week. Adjusting the CF7 manually would be very frustrating.

I have tested the PHP with XYZ PHP Code plugin and it works. The code looks like this

The result of the script is values in double quotes, as requested by CF7 (Select):

Is there a way to do this? 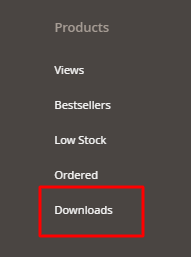 Any idea about what is the use of this report?

I’m extremely new to Drupal so if my question is badly worded I’m sorry. Inside my menu_ui_override.module I have made a made a new field and added a custom submit handler:

This seems to save my new field but now I’m not sure how to load the data entered into that field when I go back to edit the menu after saving it. I’m also not sure where to put the logic for this part. Any help would be greatly appreciated!

I wanted to add an abort menu along with providing the console menu with new page if the console menu to be listed exceeds 7 options . I came across the solution mentioned in https://stackoverflow.com/questions/59318105/powershell-make-a-menu-out-of-text-file which provides a very good approach for dynamic menu generation. But I was not able to add new page if the menu options exceeded . Also couldnt add abort menu . Can anyone help me out?

I am working on a old website built on Drupal 6 which has two languages. There is a views on which I created a page for each language, but their menus shows up on both languages. I tried different combinations of relationships, arguments and filters, which works on the content but not on the menus. How can I force a views page menu to display only on the correct language?