we have many ubuntu servers that are joined to active directory using sssd.
However, domain users are unable to login when the root partition reaches full capacity.

After some research I found the following thread: https://bugzilla.redhat.com/show_bug.cgi?id=849538
which suggested to solve the issue (or rather avoid it) by placing /var/lib/sss on a separate partition and that is exactly what I did. (supposedly there must be room left in /var/lib/sss directory for logins to succeed)

I was very disappointed to discover that this solution is proven false.
my root partition reached full capacity, while /var/lib/sss still has plenty of room.
domain users are still unable to connect.

(obviously making sure the root partition doesn’t get full is the ideal solution, but sadly we do not live in an ideal world..)

I’m trying to partition my hard drive in order to install Ubuntu.
I’m using MacOS Catalina.
Upon selecting the device and clicking partition, I encounter that most of my hard drive space is greyed out with only 45GB to use out of 1TB. I certainly am not using most of it either. Please see image details below: 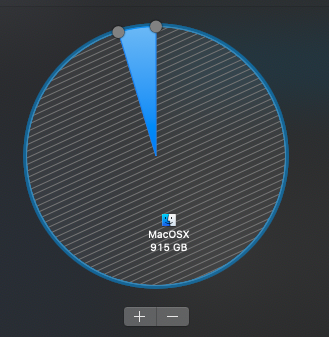 How can I get over this and use more space for the partition? Appreciate any advice.

I’m trying to install Ubuntu on my Laptop. I don’t have any other OS’s installed on it. I have tried "Erase disk and install Ubuntu", but that always crashed. So, I chose "Something else" , but I have no idea what to do there. My laptop has a 1 TB HDD with 8 GB of RAM

I am new to linux, 🙂 and here is my question about lvm expand space.

BUT , NOW one of server shown:
enter image description here

I expand the space from 100G to 130G, if I create the partition, I think the existing data will lost, how to expand LVM on this situation? thanks

Output: Yes or No.

Question: Exists a Schedule $S$ with $FinishTime(S) leq b$ ?

Output: Yes or No.

First Problem: When the Makespan Problem has $m$ machines and not two, I don’t know how I can use Partition for that scenario. I could recursive iterate the jobs (so that I split Makespan in several Partition Problems) but then I had to use the Partition Problem several times and with my understanding, I am only allowed to change the Input for a Polynomial-Time Reduction.

Second problem: But what happens if there is no optimal solution? I only receive “No” from Partition but I don’t know how bad the Partition result is.

I would be really happy if someone has an idea for this, I don’t know how to I could find a solution for this.

I have a SSD 120GB and it’s running ubuntu 20.04.
I want to partition this disk for install windows 10.
I tried use GParted to resize but it isn’t apply.
And i tried to unmount and output is:

I want to install both windows and a linux system ((Arch)) on my SSD but I want one of them to be write from beginning of the drive and the other starts from the end .
I want to do this because of lack of storage . I want to be able to resize both of them based on my needs whenever I want.

In our lab, we have a few dozens of dual-boot computers installed with Windows 10 and Ubuntu, using either legacy (CSM) or UEFI boot depending on the machine. In both cases, GRUB2 is used as a bootloader. All the machines have a custom partitioning scheme without a Windows recovery partition, as the latter is not needed. If a machine has issues, we rather reimage it from the network (using a PXE booted Linux).

Now the problem comes with Windows feature updates, the latest being version 2004. When one of these updates installs, it somewhat shrinks the Windows system partition to add back the recovery partition. Given its reduced size it would be fine to leave it alone, but this operation breaks GRUB as the Linux partition changes number, and the first stage of GRUB doesn’t understand partition labels to find its second stage (even on UEFI machines). If a machine is hanged on a GRUB rescue prompt, there’s no way to remotely correct the issue… sometimes leaving offline for hours (if not more) machines that must remain remotely accessible.

As we don’t have any use for the recovery partition, the question is how to prevent the updates from creating it in the first point? Of course we could have it there when imaging the machines, but given that we don’t actually want it, it seems just a waste of disk space.

So I have my 2TB disk into two partitions (C:) and (D:), I don’t care about (C:) which hosts windows. I want only Ubuntu as an operating system while keeping everything at the (D:) partition.
Any idea if that is possible?