Return to my PC (running Windows 10) yesterday to find it sitting in the UEFI console, so I have no idea how this happened.

Now Windows 10 will not boot. I am getting an error about missing or damaged files in the EFI partition. 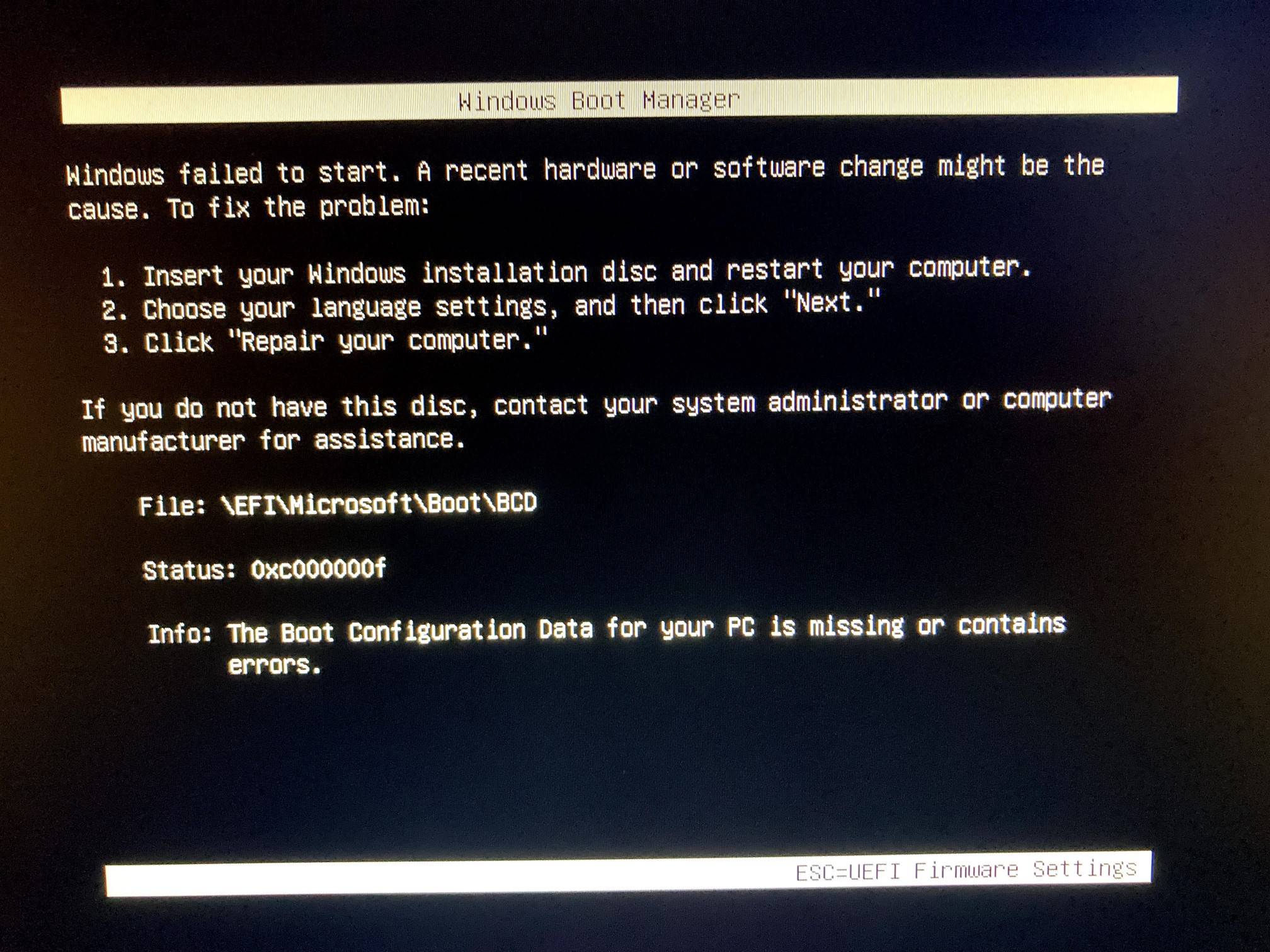 Depending on the tools I use I am finding completely different things, which is baffling. (Obviously) I’d rather avoid reinstalling Windows.

Here’s what I have tried…

Windows Recovery – totally useless. Only sees the partitions as RAW, none of the automated tools work. 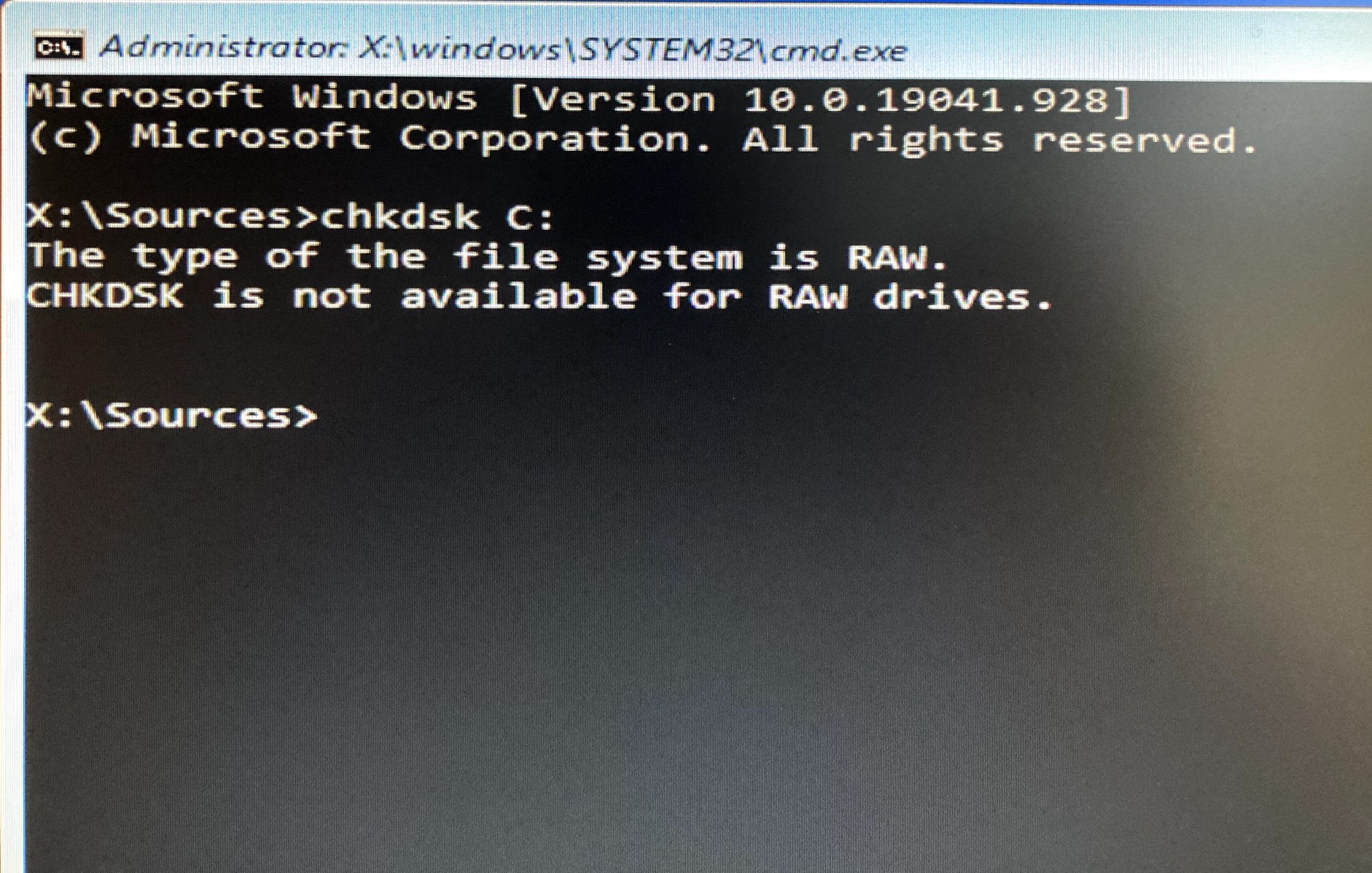 bootrec /fixmbr and similar complain about I/O problems, which suggests hardware but…

System rescue CD – specifically TestDisk. This looked like it did the job. I was able to “recover” the partitions and backup some of the critical files. I wrote the GPT/MBR (I think it should be GPT because it is a UEFI system). However, when I booted back into the Windows Recovery, expecting it to recognise the partitions… still RAW. 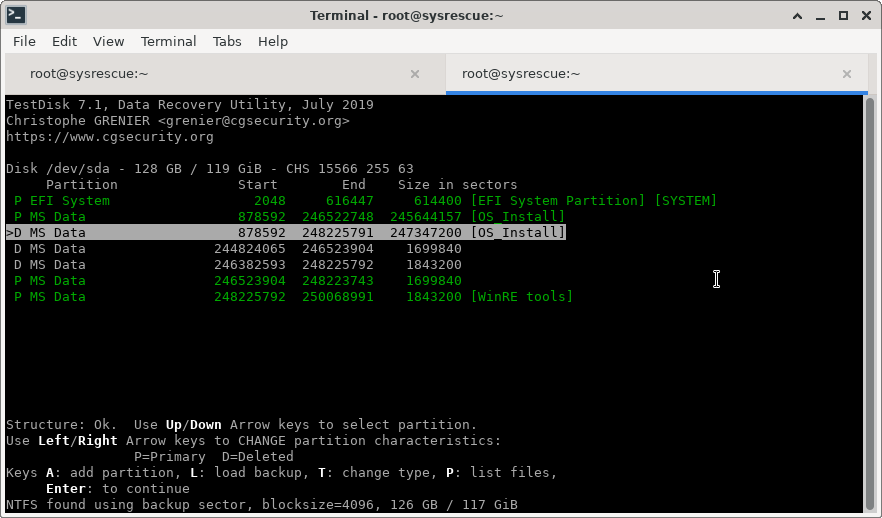 However, back in SystemRescue… parted shows me 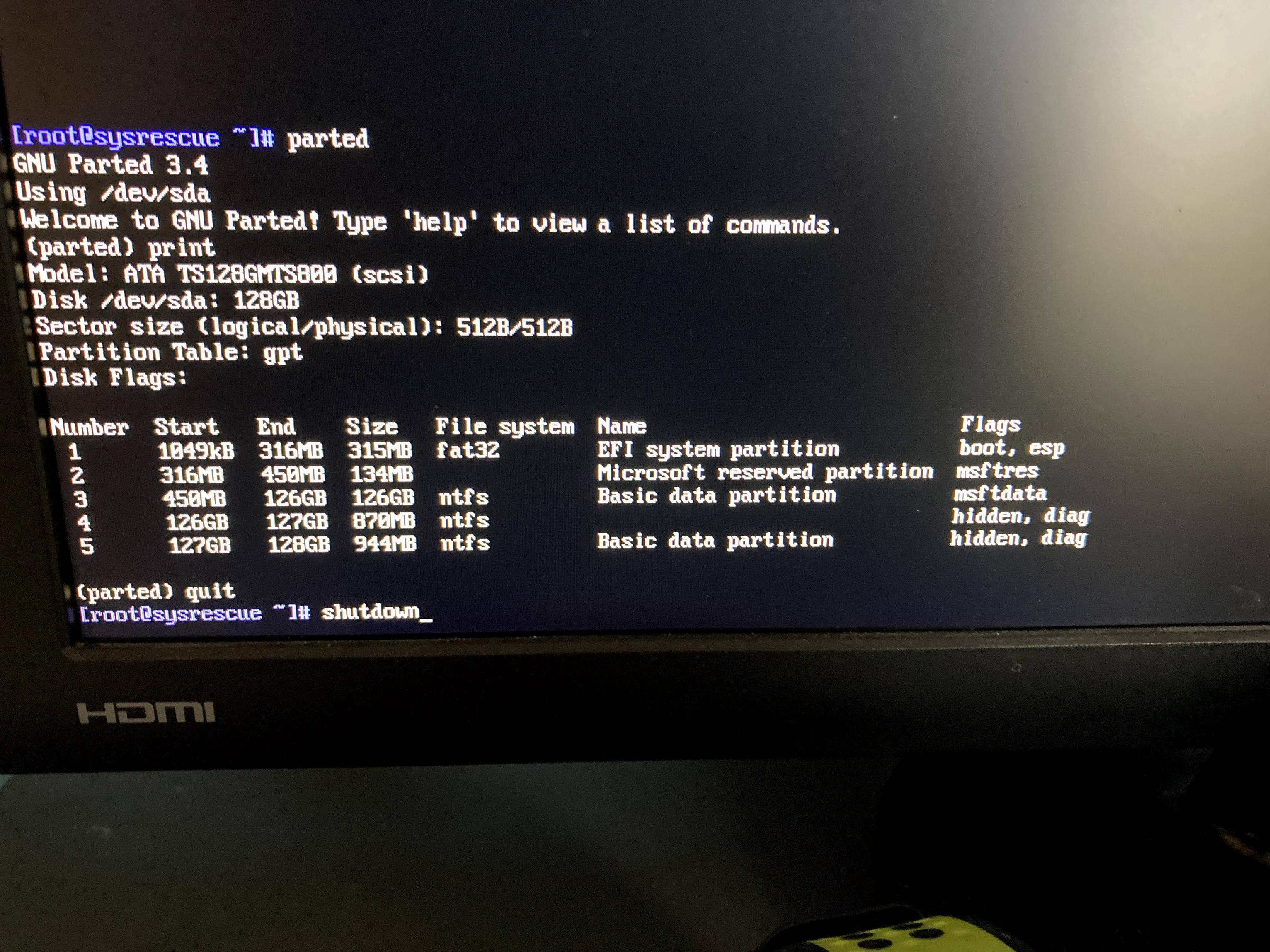 So, the partitions are there. The GPT is there but Windows doesn’t “see” it and so I can’t use bootrec.

TestDisk says the boot sector is fine and matches the backup.

AOMEI – this showed the whole disk as unformatted and then hung. Quality software. 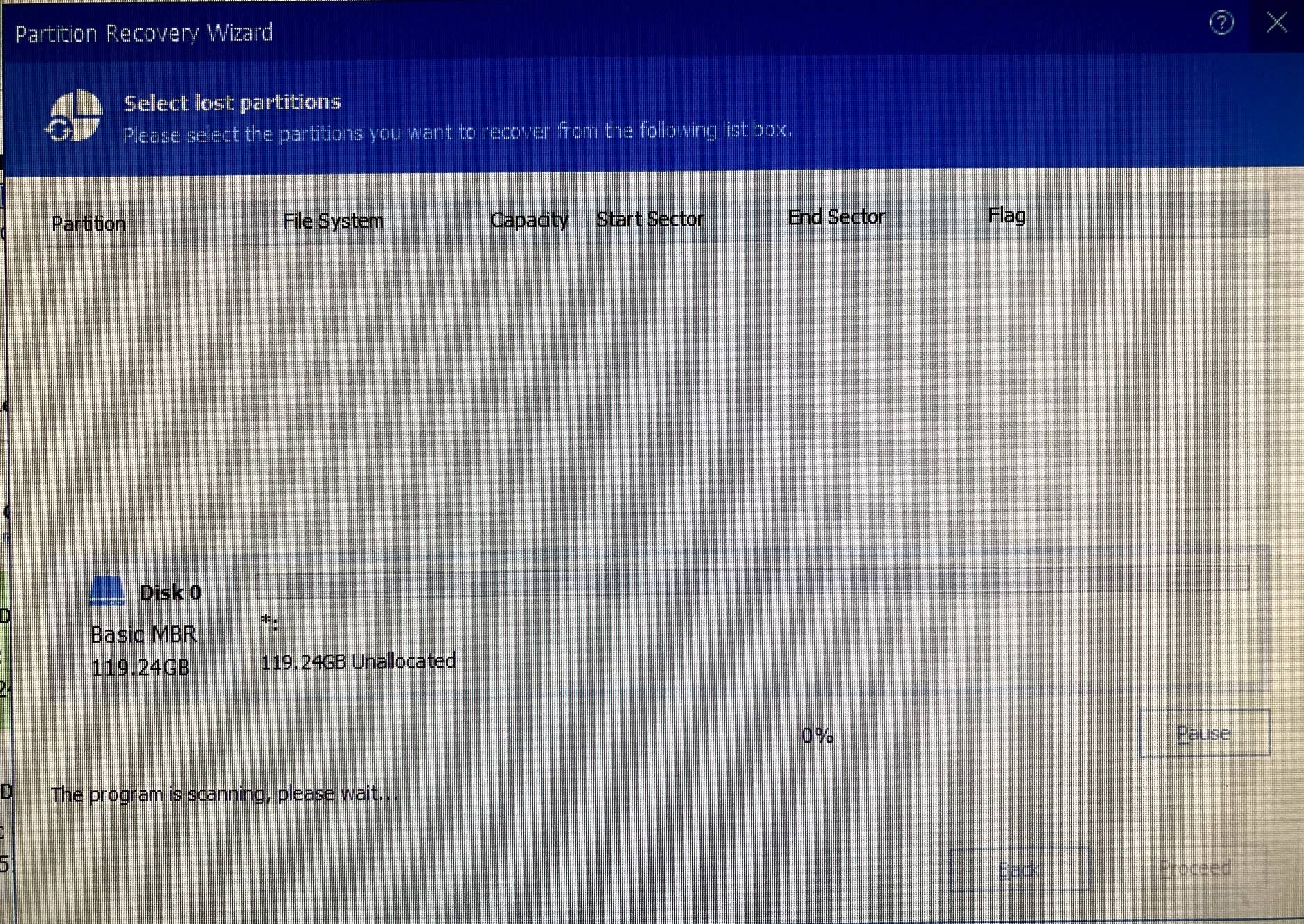 TLDR; the partitions are there, the data on C: is intact. I haven’t been able to check the disk (in terms of bad sectors) but I suspect this is an issue, at least in the EFI partition. What is the best way to do that?

I’m using Dedicated SQL-Pools AKA Azure Synapse (which is different from serverless/on-demand Synapse that comes with Azure Synapse Analytics). And According to Azure:

While the syntax of partitioning may be slightly different from SQL Server, the basic concepts are the same.

Here is the order of things I did:

When I run this SQL statement:

I get this result:

This SQL statement however:

I have a Dell Latitude 3560 laptop that was, of course, delivered with Windows 10. When it was received, I shrunk the Windows partition down to 60GB and installed Fedora 28. The machine boots into Fedora properly and can boot Windows by selecting it from the grub screen.

I don’t get much use out of the machine (I have others) and want to remove all the Linux partitions and re-grow the Windows partition, so somebody else can use it.

I don’t have Windows install media, since the system came pre-installed.

I’m afraid that if I delete the Linux partitions, I’ll have no MBR and it won’t boot at all.

How can I preserve a boot record so the machine will continue to boot Windows 10?

I have a big table containing multiple indicators per ticker. The table is partitioned by indicator. Each indicator has nearly 50 million rows and currently there are about 30 indicators and they will become more in the future.

In order to update indicators I use switch partitions. Instead of delete I insert the filtered data in new table. Then I make the necessary calculations and insert them in that same table. I rebuild indexes (the same as in the main partitioned table) and finally I switch partition so that the updated indicator is back in the main table.

Rebuilding the index though takes so much time that the saved time from deleting and calculation into the main table is pointless.

I am not a pro in sql I also do not have permissions to modify the database structure in any way. Basically I am looking for solution linked to either faster index rebuild or some advice (sources to read too) on what could be the best architecture of a table in which I insert values, and sometimes use current values to calculate new ones and insert them back. On top of that we talk about table with size 30 * 40 million rows.

So we have 2 servers

Server A. production (no partitions)

we restored a backup to the new server, partitioned a large table by datetime and turned on compression, and we were happy

Trying to be clever we turned on replication to update the new server with the latest data on the large table, but that broke the partitioning and compression.

We cannot query any old data on the new server, only data from when we turned on replication
The clustered index is the old one, and compression is not on, and no partitions to be seen in SSMS, Its using the PRIMARY filegroup (same as the current live server is using)

On the physical disk I can see the partition files, and they are still massive with GB’s of data, so i know the data is there, but it appears the table has lost the link to it

It appears turning on replication replicated the filegroup side of things, is there a way to point the table back to partitions and all the work we did getting it ready for switch over

Its a pretty large database, this one table is 11TB on the production server.

I am using preseed to do an unattended install of Ubuntu 18.04 using the following recipe, but it ends up with the lv_swap partition filling up the disk and it ends up with 60+GB.

How can I make the partitions respect the size described on the recipe:
1 GB /boot
20GB / (LVM)
20GB /var (LVM)
4 GB swap (LVM)
rest would be free space on LVM to be used later

I have rooted android phone running android 10. I have one ext4 partition created using :

which I mount using below commands:

ext1.img file gets mounted successfully but when I create another ext4 file and try to mount in /mnt/ext2 using following commands. It gets mounted but the contents of ext1.img are shown in /mnt/ext2.

What changes do I need to make to mount multiple ext4 files in android ?