I am raycasting from the camera, which allows me to get the object that the player is looking at within a certain range.

The issue I have is that the camera can be zoomed out away from the player, so the raycast can come up short and I need the raycast to be a very specific length.

So I thought that if I get the distance from the camera to the player, I can then offset the starting position of the raycast, and this would also prevent objects getting returned between the camera and the player. 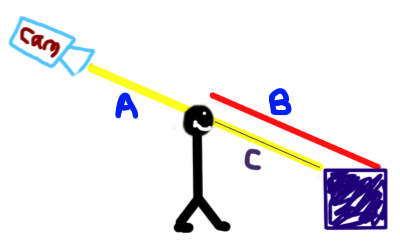 Here is my current code I use for raycasting from the camera without trying to offset it. I tried adding the dist to the start but I think I need something else but not sure.

I’m trying to implement collision detection with raycasting for my 2D javascript game. The game uses equally-sized tiles as its level structure so to optimize collision detecton I’m trying to use a LOS algorithm very similar to the one at the bottom of this this article.

However, I’ve noticed that at certain angles, tiles that should be detected are not. I’m also noticing an overall “L” shape pattern where tiles that are beyond the ray’s endpoint are being detected when they don’t need to be. I don’t think these are intended behaviors of the algorithm but I can’t quite figure out what I could be doing wrong.

I’ve assembled a small jsfiddle here that includes the most relevant code and an additional visualization. You can click anywhere on the canvas to set a new ray origin.

Would appreciate any help. Thanks.

I would like my camera to inherit the player in the hierarchy, and get closer when there is a wall or floor between the player and the camera.

Right now I am trying to raycast from the player to the desired position, and set the camera as close as possible to that desired position. But my camera is flicking all over the place.

Both of these scripts are attached to the player’s camera, which inherits from the player.

.. RotateCamera adjusts x rotation of the camera with mouse movement, and sends the desired y-position to the FollowCamera script (y-position should shift to keep player in view). The way this is working is a little hacky, but I’d really like to first focus on the raycast situation before improving this code.

.. FollowCamera does the raycasting and actual camera adjustment. I’m sure the issue is in this second script, but I don’t know how else to approach it.

I’m working on a game in which I want to pinch outwards on a character, which causes the character to split into 2 smaller copies of itself.

The method I’m thinking about using is to have the “pinch out” gesture destroy the game object and simultaneously create two instances of the smaller game object, and have them follow the fingers that pinch out. The action would also be reversible with the “pinch in” function.

My idea would be to do a raycast to detect the two-finger touch on the object (would I need a collider for that?), then use the beginning and ending touch points to determine if it is pinching out or in.

The problem is I am brand new to Unity and C# and have no idea how to write all of this. All of the tutorials for multi-touch gestures have to do with camera zoom, which is not what I am going for.

Can anyone tell me if I’m on the right track with my logic and provide some guidance on writing the code?

(Apologies, I’m not familiar with Unity/HLSL at all, so my syntax may be wonky.)

so that picture plane pixel uint3 id is at proj0 + id.x*projX + id.y*projY in the voxel coordinates. (We’ll use the w component for the distance, saving a number of operations; that’s why these are four-component vectors.)

We can save some operations if we set

here, but that’s the sort of optimization you’ll need to do yourself here.

Next, we need the distances to the very first faces the ray intersects (as measured along the ray itself):

The part in parentheses is the distance along the axis, so dividing by the same axis unit vector component we get the length along the ray.

Again, the above can be computed much more efficiently. Now, we initialize the first positions where the ray intersects the first face of each type,

and when we “use” one of those vectors, we add the corresponding delta,

The actual ray traversal loop is then

It is up to you if you use face at all, but all eight cases do need to be handled. (It is unlikely the eighth case ever occurs, but it’s good to be thorough, methinks.)

I am using Unity with a compute shader to render to a texture. So far I have been checking points along the rays in units of 1 just for testing, so I know it works. Now I am simply trying to write a function that increments the ray to stop at the next voxel face, basically. And I think I understand the algorithm but my implementation is not working correctly.

This is the function I am using in a loop to find how much I should increment the ray by for each increment.

Then I multiply the normalized direction vector of the ray by the smallestDistance to march the ray like:

But I get very strange results, some cube faces don’t render in, some render as speckles of pixels. Here is the full compute shader:

However, when attempting ray-triangle intersection, I get strange artifacts. My shader is programmed to simply test for a ray-triangle intersection, and color the pixel white if an intersection was found and black otherwise. When the triangle should be visible onscreen, the screen is instead filled with black and white squares/blocks/tiles which flicker randomly like TV static. The squares are at most 8×8 pixels (the size of my compute shader blocks), although there are dots as small as single pixels as well. The white blocks generally lie in the expected area of my triangle, although sometimes they are spread out across the bottom of the screen as well.

Here is a video of the artifact. In my full shader the camera can be rotated around and the shape appears more triangle-like, but the flickering artifact is the key issue and still appears in this video which I generated from the following minimal version of my shader code:

I render the image to a fullscreen triangle using a normal sampler2D and rasterized triangle UVs chosen to map to screen space.

None of this code should be time dependent, and I’ve tried multiple ray-triangle algorithms from various sources including both branching and branch-free versions and all exhibit the same problem which leads me to suspect some sort of memory incoherency behavior I’m not familiar with, a driver issue, or a mistake I’ve made in configuring or dispatching my compute (I dispatch 160x90x1 of my 8x8x1 blocks to cover my 1280×720 framebuffer texture).

I’ve found a few similar issues like this one on SE and the general internet, but they seem to almost exclusively be caused by using uninitialized variables, which I am not doing as far as I can tell. They mention that the pattern continue to move when viewed in the NSight debugger; while RenderDoc doesn’t do that, the contents of the image do vary between draw calls even after the compute shader has finished. E.g. when inspecting the image in the compute draw call there is one pattern of artifacts, but when I scrub to the subsequent draw calls which use my image as input, the pattern in the image has changed.

I also found this post which seems very similar, but that one also seems to be caused by an uninitialized variable, which again I’ve been careful to avoid. I’ve also not been able to alleviate the issue by tweaking the code as they have done.

I’m running the latest NVidia drivers (461.92) on a GTX 1070. I’ve tried inserting glMemoryBarrier(GL_TEXTURE_FETCH_BARRIER_BIT); (as well as some of the other barrier types) after my compute shader dispatch which I believe is the correct barrier to use if using a sampler2D to draw a texture that was previously modified by an image load/store operation, but it doesn’t seem to change anything.

Odds are that the cause of the problem lies somewhere between my chair and keyboard, but this kind of problem lies outside my usual shader debugging abilities as I’m relatively new to OpenGL. Any ideas would be appreciated! Thanks.