When using a studio flash, you usually have a modeling lamp. You don't have to turn the modeling light off to take pictures. They are bright enough so that you can get an idea of ​​the lighting and the focus. However, the flash will cover the modeling lamp so much that your correct exposure, if the flash does not fire, will not record anything. These lamps are not that bright.

Copy the idea if you're using a flash. Place a dimmable lamp on a floor lamp and give yourself just enough light to focus. Don't worry about turning it off, it will be overwhelmed.

I use alter_form to & # 39; user_login_form & # 39; to change. The problem is that I am hiding a field and I want to show it to the user and validate it ONLY AFTER login and passport are validated (The user previously clicked the "Login" button.)

How can I tell the form that I am not done yet and have to fill in a new field that can now be viewed and validated?

I'm not sure which approach is the best? Did someone have the same situation before

Given the following scenario, how should you develop this application to take advantage of modern standards / technologies?

You need to create an application where users can log in to see data visualizations for their favorite sports teams. You will find a reliable API to get the required sports data. Now, however, you have to decide how you want to design your application.

Your application essentially consists of three components: a front end, a back end and a cronjob service that writes the required data from the API provider into your database.

I am only familiar with the client / server architecture, but I think the cronjob service should be isolated in its own repo / container, in which you would only share the DB instances / models with the backend component. However, I am interested in hearing from experienced engineers and whether I can use certain cloud technologies to improve performance and maintainability. I am considering using graphql and MongoDB for the backend component if this is relevant.

Any discussion would be welcome. Thanks a lot! Also, links to relevant reading material would be great … if you were trying to learn something.

Background: Yesterday I updated a plugin called WP Security Audit Log to the latest version 4.0.0 (from 3.5.2.1).

After the upgrade, the website was completely blown up. After doing some research, I found that the biggest damage was done to another plugin called Polylang, which is supposed to translate everything.

After long hours, I decided to restore a backup and everything went back to normal.

This is the overwhelming part (for me). Even if Polylang and 100% of the other plugins remained disabled, the Polylang functions like pll_current_language were still not accessible after the WP Security Audit Log was updated

At first, I preferred not to restore the backup because things would be lost, but I couldn't easily understand how this could be done.

How can a plugin update completely break the "callability" of other plugins functions even if this plugin is deactivated ???

There are only two sensible options:

I am writing this because I lost more than 5 hours yesterday trying to track the problem to no avail. And when I am 100% sincere, I found that the problem with updating the WP Security Audit log was caused by sheer accident of queuing plugins one by one to check their impact on the site.

Any insights into what exactly could have led to this or how I can only track it down for learning purposes?

I am creating a full stack web application for a professor. At his request, the passwords and user names are generated programmatically and cannot be changed or reset by the students. (If you forget your password, ask the professor who can look it up.) Does this tightly controlled system eliminate the need to follow all common best practices for storing passwords in a database?

If relevant, the app contains no associations or identifiers between the student's identifying information (name, gender, etc.) and his username and password.

I'm working on moving a backup system of loose files to a (spatial SQLite) database.

The user places objects from a library in a 3D simulation. Scenarios are "what-if", what if we put 5 wind turbines here, what if we put 10 solar panel racks instead, etc. They are mutually exclusive within a "group".

Elements are prototype objects that can be instantiated by the user. Wind turbines and solar panel racks are specializations of items with additional data.

It is the first time that I have performed SQL outside of trivial school projects. So please do not hold back to name best practices / tips.

Do my FKs make sense?

Is it in the right shape?

Interactive version: https://dbdiagram.io/d/5e04aa5eedf08a25543f6bc5
You can export SQL from there if this is easier to read. 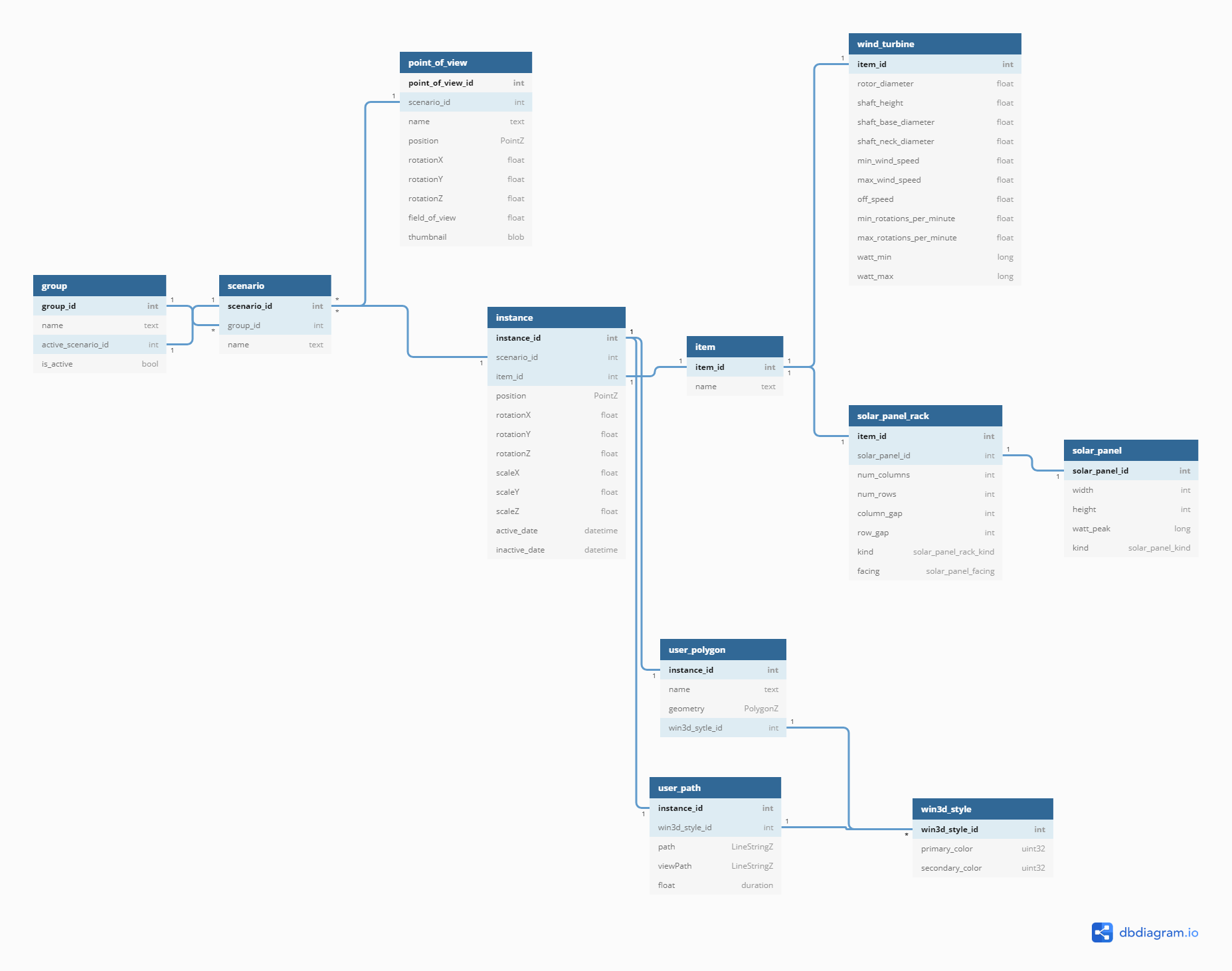 I am SQL Server DBA and encountered strange scenario, our cluster had 10 nodes 5 primary 5 secondary each node had SQL role …. Example Ams1pd11 to Ams1pd15 are primary .. and Ams3 side of PD11 to 15 was secondary … In this scenario, the behavior of the entire cluster after 2 node failure was unusual and all node availability groups were inaccessible, resulting in multiple customer failure.

Explanation of the real-time scenario, how it started when I was on the shift ….

Ams1pd12 has failed and hosted primary server A.
So role A on the best possible node was automatically canceled and he chose Ams1pd11.

Since both primary roles were on a node, there was a risk of balance. I failed over the B node to one of the secondary nodes on the Ams3 side. Now it was balanced and I was just about to investigate on Ams1pd12 why it failed and everything. ,

Now 2 out of 10 nodes had failed and one role was stuck, so the customers in this role were affected.

We troubleshooted the same issue at Microsoft and found that other nodes were shown by the availability group for all blocked nodes and were not opening and blocking when expanding.

This affected all nodes in this cluster and therefore our backups were stopped.
There was data loss …

The nodes that appeared and AG groups were inaccessible. It was strange that the users who were already logged in could change the data. Only new connections were rejected. But the old connection was still active.

So if the problem started and the backup was stopped at 7am, most customers could access the database until 6pm, resulting in 11 hours of data loss.

Manual database recovery took a lot of effort …
These online nodes were easy to restore because we only had to attach the database databases while migrating data and log files for databases with deadlocked roles. We had to restore it manually.

Please suggest the best strategies to follow in this type of disaster to achieve rapid recovery.

The push and pull scenarios differ in how the registered observers experience what has actually changed when they are called by the subject / observable.

In the push scenario the call to the Observer does Contain information about what has changed (possibly with more details than some observers need). The information is passed on to the observers, regardless of whether they want it or not.

Both scenarios have their place, and you can also have an incident in which some information is pushed and observers can get more information when needed. Which scenario to use depends on the typical information needs of the observers in order to react to changes in the subjects / observables.

I am researching intrusion detection systems (IDS) and deep packet inspections (DPI). For example, suppose a system in which values ​​are passed to a validation system and the validation system validates the data passed (verifies anomalies, such as statistics, machine learning, etc.).

In this video, which was posted in 2011 by the well-known Youtubern Rhett and Link, a story is presented, which I can not agree with the reality. Can you help me a) determine if this scenario could possibly occur and b) how?

The following story is presented as a fact (although it is not Necessary I mean, we should believe it. Although it's not impossible, I think that as a long-time supporter of the broadcaster, it would be unusual for them to really have invented this. You may be confused!)

Here are my previous thoughts: Occasionally, flights with the same flight number but with a different aircraft are continued ("change of lane"). In this case, however, I have found that this is announced frequently and clearly and that this is noted in large letters on the boarding pass. In addition, the sign at the gate in RDU should have been "Minneapolis". As far as I remember, passengers generally get new seat assignments – having the same seats seems really weird … What if it's a different plane or someone else just bought their seats for the second segment before doing so first booked?

Any help would be appreciated!