I am not familiar with vintage cameras. On looking through some old family storage boxes I have found an Agfa Billy Record with bellows – I think its the 7.7 model.

The shutter button on the top right does not want to press, and the small dot next to the button is showing red.

Is there a shutter lock on this camera, and if so where is it?

There is no film loaded – would that prevent shutter operation?

Hello and thanks for reading my post. I am not familiar with vintage cameras. On looking through some old family storage boxes I have found an Agfa Billy Record with bellows – I think its the 7.7 model. The shutter button on the top right does not want to press, and the small dot next to the button is showing red. Is there a shutter lock on this camera, and if so where is it? There is no film loaded – would that prevent shutter operation ?
Any helkp or guidance appreciated.

I would like to get into film photography as a hobby, I own two 35mm film Cameras which both have broken TTL meters, they are common Fujica bodies and I would like to replace the (battery damaged) TTL meter system with a new sensor and microcontroller as a project.

My aim is to use the inbuilt indicator needle +/- to indicate if I am over or under exposing the film. The issue is I cannot for the life of me find a formula or work one out.

I have found two answers that have helped but not enough to work out a formula that works.

What is the difference between luminance and illuminance?

Is there a formula to calculate ISO according to Shutter speed?

The light is measured through the prism and that appears to need an extra value called reflected-light meter calibration constant. I cannot find this for Fujica but I’ve tried using the Pentax value which is 14.

To be able to calculate EV I would need f/stop, however, I can only access the following values.

It must be possible to obtain if I am over or under exposing the film from these values as the cameras did it before they broke. It would be fantastic to find out what the formula/calculation would be? It might be a simple case of my Google-Fu failing me due to lack of knowledge.

There can be differences. For some subjects, a longer exposure just works better.

One of the classic examples is taking a picture of moving water in a river or stream. With a short exposure, the water looks rather strange and frozen. With a longer exposure, you get a smooth, flowing look that many people find more pleasing. Depending on how fast the stream is moving, it often takes an exposure around 10-15 seconds (or so) to achieve this look, so in bright light you often just about need an ND filter to get a long enough exposure.

Another place that a really long exposure can be helpful is taking pictures of popular tourist attractions. If you’re patient (and have a tripod) with a heavy ND filter, you can take something like a five minute exposure. The people (who rarely sit still very long) mostly disappear. Take a half dozen or so, and combine them properly in Photoshop, and most of the tourists simply disappear.

Of course, there are also cases where you really want a short exposure. The most obvious is almost anything (like sports) that involves fast action. With too long of an exposure, most of this would turn into an incoherent blur. On the other hand, I think many people to a bit overboard with this, trying to completely “freeze” everything in the shot. I generally prefer to use a long enough exposure that a few of the fastest moving parts are still at least slightly blurred, to retain a sense of motion.

Just for example, consider this shot: 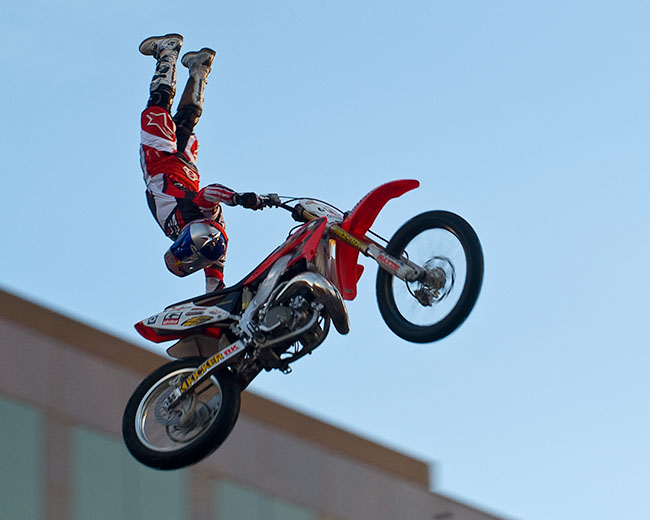 Here I worked pretty hard to find what I considered the “right” shutter speed. The obvious strategy would have been to shoot with the aperture wide open, to get the shortest shutter speed, so everything would be frozen and sharp looking.

I chose, instead, to use a longer exposure and pan with the bike, so the background and spokes of the wheels are blurred, so you get clarity but get a clear sense of motion. In this case, I only used the aperture to get a slower shutter speed, but if I’d had the right ND filter with me, I’d have used it–shallower depth of field to further blur the background would be an improvement.

This can get a little tricky though. For example, another shot from the same night: 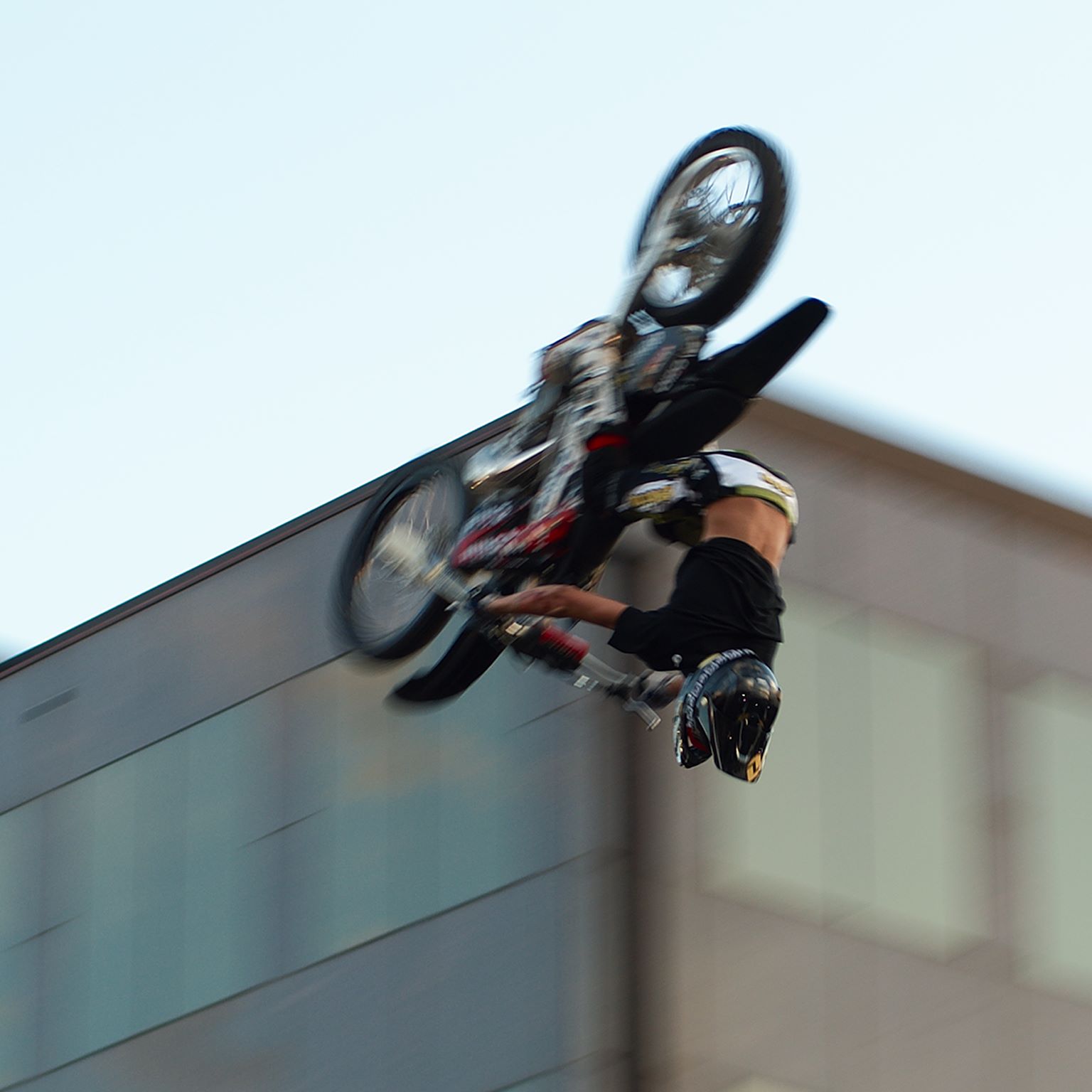 Part of the time I think this would be better if I’d used a faster shutter speed. Other times, I think the kind of…frenetic feel of it is just about right. Kind of depends on what sort of result you want though–at least to me, the way it is right now is strong on “feel”, but would probably be a problem if you wanted a really factual presentation.

I had a similar problem with the Godox flash I attached to my d7500. It turns out that the contacts on both the flash and the hot shoe were dirty enough to cause a problem. A few seconds of light burnishing with some very fine steel wool solved it–taking care to blow away the residual dust and debris. I wouldn’t do this every day, but if you leave the flash mounted for long periods, it may be necessary once in a great while. The before and after difference wasn’t visible to me, but the flash started working normally after the “treatment.”====

i have a canon EOS 550D but when it’s time to use it, the shutter stopped clicking. but when i used the live view shooting, the shutter works. did i clicked on something? or do i need some settings to reset?

Well the first thing to do is work out if it’s a problem with the lens or the camera.. my gut is that it’s the lens and the irises are stuck and I say this because it works fine unless the camera has to “stop down” to a smaller aperture like another poster said.

Take off the lens and find this little tab that I’m pointing to with the screw driver. 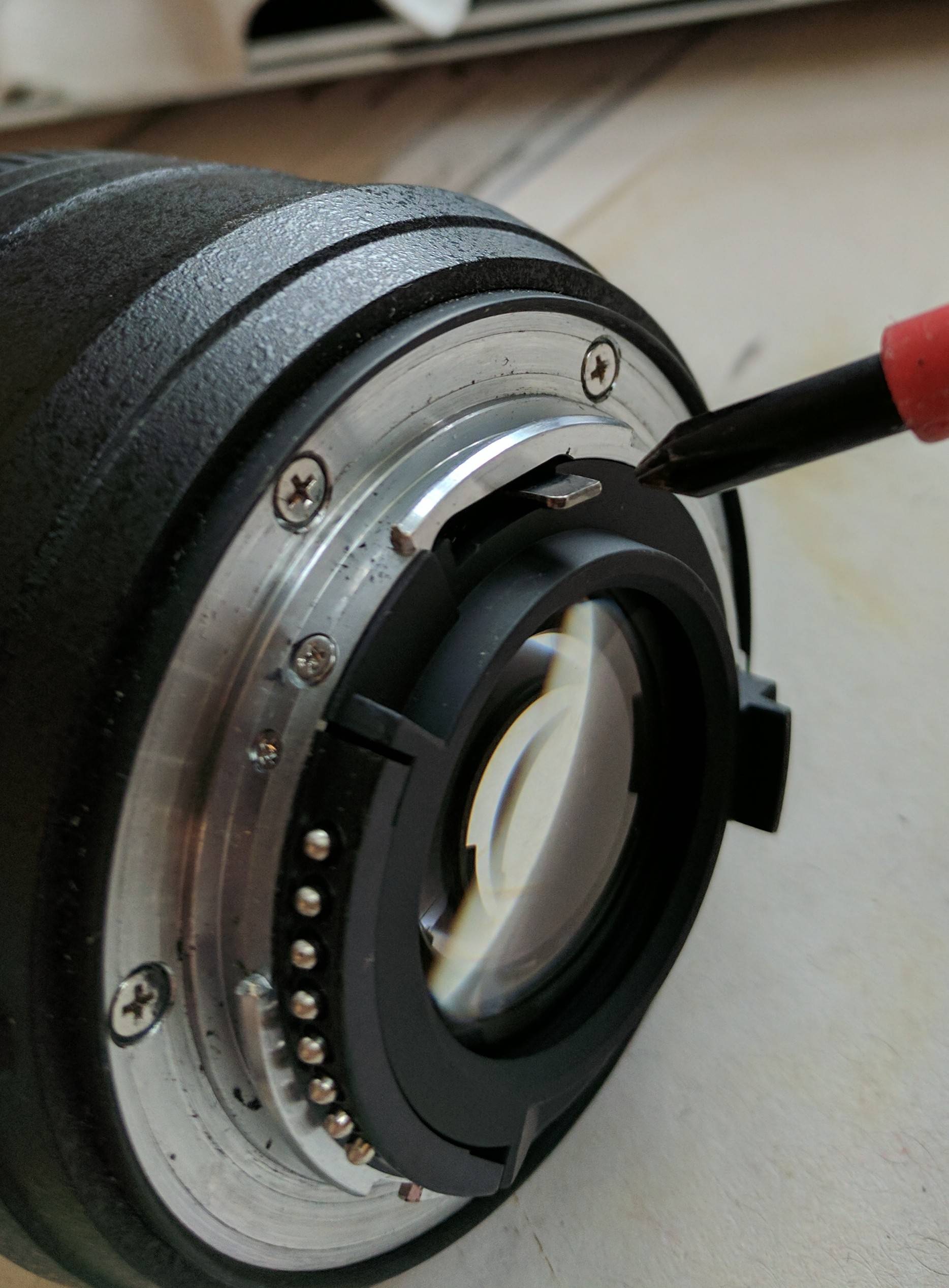 It is spring loaded so with the lens off the camera it should be wide open. If you look through the lens and tweak this little lever you should see the aperture irises snap open and shut. If you can’t move that lever then this lens is toast.. and honestly not trying to get repaired because it’s so plentiful and cheap used.. better still, buy something better!

If it is stuck you’ve actually nothing to lose by pulling the back off it. It’s just a couple of screws. I’d loosen those screws on the back a little until you can get a bit of a wiggle on back plate and see if that unfouls whatever is fouled up on something.

If that’s moving fine then it’s something else, possibly the part of the camera that mates to it. It’s at 9 o’clock as you look into the camera with lens removed. I wouldn’t mess with that, although you could give it the lightest push DOWN to make sure it actually moves. If it’s NOT at 9 o’clock, more like 8, then that’s a problem and the tensioner on it might have gone bad.

That’s the point at which I think DIY investigation comes to an end.

If you don’t like the look of any of this, find someone else with a Nikon AF lens, and see if the same thing happens – or go to a camera store, tell them you think your lens is bad, and ask to use theirs, and see if it has the same result.

For Canon since you asked for it there is Highspeed mode on Canon flashes where you can get up to 1/1250 safely depending to the flash model and object distance. Also without using the hotshoe and connecting the flash from side trigger, you can get up to 1/320 safely, 1/400 and 1/500 at your own risk.

Also there are some triggers and their special softwares delaying the shutter to sync with the flash for lower shutter speeds. For that I could not make any of those work properly with canon below 1/1250 shutter speed on canon mkII, mkIII, 7D, IdmkIV but on nikon d300 and d3x, I have tested up to 1/4000 without any problems.

On a camera in which the film advance is not coupled to the shutter, do you advance it to a new frame after releasing the shutter, or wait until you’re next ready to shoot before winding it on?

If you forget the state the camera is in, on your next shot you risk either making a double exposure or wasting a frame of film, so it seems sensible to be consistent about it.

Which way though? I can see reasons for doing it either way.

With a shutter-coupled film advance, one would normally prefer not to put the camera away with the shutter cocked, for the sake of the mechanism. This would make the practice of not advancing the film in an uncoupled camera consistent with that, and easy to remember for that reason.

On the other hand, advancing the film only when you’re ready to shoot makes taking photos slower. Depending on how fiddly the advance mechanism is and whether you need to watch the symbols carefully through the little red window on the back could consume enough time to miss an opportunity.

I’m inclined to the first practice, but perhaps there’s some very conclusive reason for doing it one way rather than the other.

I have had the same on my old a7 III before I sold it off.

The reason I sold it, was partly because of the feature envy to the a7r IV, partly due to more and more broken shutter issues were appearing in the facebook groups centered around that camera.

It seems that Sony saved a bit on that camera’s shutter. The shutter life is rated for appr. 200,000 releases. However the amount of shutter failures seemed quite odd to me. Some only had like 15K to 30K actuations before the shutter failed.

When I sold my camera, the shutter was working fine, but I saw the same abrasions that you had, which I do not have on my newer cam. You could try to contact Sony about it, but I am not very positive they would exchange the shutter (costs around $300) if there was no failure yet.

What likely will happen, is that the serration of the edge will get worse until the shutter will catch on one of these edges and then rip apart.