Energy density is defined as energy per volume. So our power scale should follow the Volumetric scaling, not a linear one. From one step to the next, you increase the energy needed by the third potence.

The scaling here is clearly logarithmic, with two distinct areas: the “short” ranges (steps 1-3) and then the Magnitude steps from 4 to 10. This allows to differentiate better on the low end, and then proceeds into a smooth large scale, offering useful intermediate steps. 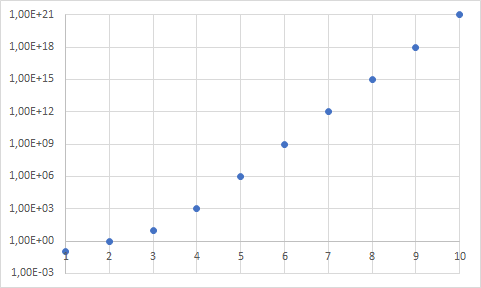 So, why did I choose this scale, which focusses on the low end?

First of all: game usability & realism

Most spells that a typical player character could or should use need to be in distances that are within sight or useable in what accounts for typical combat ranges. These paradigms are fit up to somewhere between steps 6 and 7, depending on the weapons involved – a typical military rifle is useful all within step 6, while modern artillery would go up to 7.

The typical engagement distances of armies over time are rather short, so a focus on the short end for spells is best to model typical spells and have a difference in ranges available that allows separating between short and medium range combat spells. Some examples:

The scale also has the benefit of being roughly multiples of 60. So it can be used to quickly calculate speeds from the distances. Say our fireball with range step 5 takes 60 seconds to get to that far point, and for math sake, we round to the closest 10. 60 meters/60 seconds means it travels at 1 meter a second, or rather sluggishly and can be dodged. If the range was step 6, that’s 600 meters/60 seconds, so in the area of 10 meters a second – Olympic runner speeds! And if it takes step 6 but only takes 6 seconds, we are at 100 meters per second, that’s the speed of a longbow arrow or about half the speed of a slow bullet or a quarter of a heavy arquebus.

Look over the plate: other systems

Let me pull out GURPS. GURPS is notorious for cramming everything in spreadsheets. Including this list for range increments from 3rd edition, and I bold roughly equivalent distances to our distances above:

Those are horrible fine segments, and the modifier progression in that thing goes from -15 to +49 with 0 on the 2-foot step. But for the far distances (where GURPS goes with half my proposed distances but adds another increment in the end), the distances I propose show up, making them at least useable for a simulatoric standpoint.

The picture of putting the focus on the engagement ranges of combat however shows itself in various Fantasy RPGs:

In my decade-and-half of being the GM for various The Dark Eye groups, the longest engagement range ever wanted was 550 meters from the weapon used – a heavy trebuchet. Most TDE spells have a range well below 100 meters, even there are very few spells that have a range of as far as the eye can see or continent. I only know of one instance where such a spell was used in combat at distances further than about 100 meters – and it was aimed at a target the size of a house. Any spell that I witnessed to be used at a longer range was either a communication or clairvoyance spell. In this I am not counting any trans-planar spell: the distance to hell is one step through the invocation/banishment pentagram. As a result of the costs and targeting needed, most combat magic in this system is actually pretty close to mundane ranged weapons when it comes to their ranges, even though the efficiency/impact of the spells can be much higher.

Pathfinder 1e and D&D 3.5 have only very few spells that have ranges that are longer than half a kilometer (those exceptions are generally clairvoyance, communication, or translocation spells). Most combat spells are even limited to less than about 100 meters. Generally, magic can be (and is) treated as just another type of ranged weapon in Pathfinder, even if area-effect spells are common.

Shadowrun also fortifies this experience: Shadowrun imposes no range limit but the (optically redirectable) line of sight (and ability to see its target) of the caster. However, in the last 12 years of playing Shadowrun the longest spell directly cast by any caster I witnessed was about 250 meters using binoculars, and most spells were flung even below 50 meters. In fact, I remember only very few casts of spells further than 50 meters, unless a spirit sent on a mission was involved. As far as I witnessed, even as magic in this system is allowed to be super-long-range, generally it was used at ranges where close-combat weapons are used – and often as a replacement for such.

Mage the Ascension uses one of the magic disciplines as the limiter for distances in its rather freeform magic system, on a success scale: you need 1 to target something that you can see, 2 allows you to reach a very familiar place (like you home) no matter how distant, 3 a familiar place (your buddy’s home), 4 gets you to a place you have been once (like the capitol), 5 can get you somewhere you have only been described or seen on a photo and 6 gets you anywhere on earth you can imagine, even if you have no idea what is there. But yes, Mage is a really poor limiter in magic ranges, as it is very free in casting magic (and only clobbers you over the head with paradox for it).

What steps should I take if I am getting involved in topic disputes on Quora? – Web Applications Stack Exchange

Web Applications Stack Exchange is a question and answer site for power users of web applications. It only takes a minute to sign up.

I keep asking questions on Quora only for my Partner Program. However, for this question, I have been involved in a topic dispute. I keep adding the topics “Albania”, “Learning Languages”, “Education” and “Language”, and Quora Content Review keeps removing them and I keep topic-warring on that question. What steps can I take to resolve such disputes?


I came across an example of a process with a current stage image (should be attached to the thread).

Basically there would be 4 or 5 stages: Initial / Assigned / Being Processed / Completed.

Each of the stages would have (almost like a flowchart diagram) a progress image with an arrow showing the current state and they would be colored.

As the list item gets updated, the workflow images would get marked and colored for the stages.

How could this be accomplished? Would it be as simple as having a column for each stage? And if so then would the coloring of each stage come from CSS?

A and B both have geofield locations: A has field_origin and B has field_position.
Content Type A actually has three fields: field_view (type: viewfield) field_origin (type: geofield) and field_distance (type:decimal). I do not want to define a relationship between origin nodes (type A) and proximity nodes (type B).

This was my starting point but there are too few detailed steps to reproduce it and I think it assumes that the origin node has a relationship with the proximity nodes: https://www.drupal.org/project/geofield/issues/3149688

I cannot find a way to configure a proximity filter using either exposed or contextual filters to compare the origin of A against the position of B’s.

I hope this is possible as I dont want to have to set up fixed one-many relationships between A and B so I can keep the views truly dynamic.

End goal:
I am using geofield, leaflet maps and views to try to create a view of nodes of a content type B within a specified proximity distance of an origin specified in another content type A. A and B do not hold references to eachother. Content types A and B are not related and they do not hold entity references to each other so I cannot rely on views relationships to access fields from B in the context of A.

Bit more detail… A and B both have geofield locations: A has field_origin and B has field_position.
Content Type A actually has three fields: field_view (type: viewfield) field_origin (type: geofield) and field_distance (type:decimal). I do not want to define a relationship between origin nodes (type A) and proximity nodes (type B).

This was my starting point but there are too few detailed steps to reproduce it and I think it assumes that the origin node has a relationship with the proximity nodes: https://www.drupal.org/project/geofield/issues/3149688

I cannot find a way to configure a proximity filter using either exposed or contextual filters to compare the origin of A against the position of B’s.

I hope this is possible as I dont want to have to set up fixed one-many relationships between A and B so I can keep the views truly dynamic.

I have a process of sharing video snippets. The users are trained and they need to trim a video (complex step that include using several UI components), choose a recipient and write a message.

what are the steps taken to look up a user’s email address, and the date that email was authenticated, when their username is known using SQL

What will be your next steps if your SEO methods or technique don’t work?