For now. The formula for the amount of Xp a monster gives is this

I tried to scale the formula gradually so as not to achieve linear growth.

X and Y are both variables that I can change so that each enemy gives a different Xp.

XP is required for the player. It's pretty easy. The formula is

I would appreciate any help!

During my first campaign as a player, I had a problem with my DM regarding the background I gave my character. It was the first time that I created a background for my character and I loved it so much that my background story became quite extensive. (I gave my DM a short summary to make his life easier).

Although I loved creating a back story, I wasn't particularly comfortable with role-playing. Because of this, I included a piece in my backstory that cursed my character, I couldn't remember where he came from, and he was now looking for answers. I just wasn't ready to dive straight into the roleplaying of this backstory and wanted to learn RP step by step.

A few sessions after handing over my back story, my DM briefly mentioned his aversion to my back story. He did this in a single comment, away from all other players who joined the line of "Who gives Amensia to his player, what kind of person does it do?" At that time, I didn't know how to react and we didn't stop playing long after, but the comment still makes me wonder if doing this is really a bad thing?

So is it a bad thing to inflict amnesia on your player regarding his backstory? Or is it something that only my DM had problems with?

It is two things.

1. The United States really has the best healthcare system for those who can pay out of pocket. People with lots of money come here from all over the world to avoid the waiting times and limits that are in other systems.

2. The Canadian healthcare system believes that overcapacity should be avoided. They have just enough clinics and hospital beds for their expected needs. When demand increases and there are not enough surgeries, patients are sent across the border where we have MANY expensive overcapacities.

The OTOH fraudsters often repeat the lie that people in Canada wait a long time for urgently needed services and come here out of desperation. Disadvantages LOVE lies and they try to make them "true" by repeating them over and over again. You can see a lot of it here on Yahoo Answers.

I have relatives in Canada and have spent a lot of time there. Canadians are very friendly and they love Americans (for some reason), so it is very easy to talk to them. I must have asked 100 Canadians how they like their health system over the years. And in particular, I ask them if they have any "horror stories" of people who needed help and had to wait a long time. I've never heard a horror story. Statistically speaking, your health system works just as well as ours (by results), and you pay about half of our services.

I found myself in a dilemma with a 5e campaign that is coming to an end. It's been going for about a year and one of the main goals I had at the start of the campaign was Focus as much as possible on the journey of every player in my group, Unfortunately, when I finished the storylines, I realized that this approach only worked for one of four characters. Let's call him Carl.

Why did that only work for Carl? There are many reasons, but they basically boil down to it.

From a narrative point of view, unfortunately, this has led to an action that seems to be heavily focused on Carl. I've often written long sequences that focused exclusively on Carl's storyline, and I'm beginning to worry that he's the "main character" in a campaign that should focus on the whole party.

Of course, I've been trying all the time to involve the other characters and solidify their storylines, but after seeing these attempts fail (for various reasons, like characters who forget their own background stories and don't respond in any way that feels) logical or real) I was discouraged and somehow gave up trying to create more character moments for her.

Still, I have a troubling question afterwards:

How can I make sure everyone feels involved when only one player drives the story?

As we neared the end of the campaign, I noticed that some of the other players were uninterested when we got to another crossroads in Carl's story. In my opinion, these moments were the most interesting and fascinating moments related to storytelling, but I'm worried that they might feel neglected all the time.

Does anyone of you have experience with this type of problem? Is there anything I could have done differently?

What tools are available on igtor.com?

– Free Instagram Likes (you need to create an account.) (The new IGTOR Liking system works between users and other users. When you add your post, other users want your post to be credited. When you post get credited, you will get credit too.)

I'm sorry about my english. I do not know much.

Hey, I'm working on my portfolio website (UX / UI). The main audience will be smaller companies that don't know much about UX and case studies. But I am also looking for work and hope that many recruiters will also look into my portfolio.

On the one hand, I would like to present very detailed research results, conclusions, rework, etc. For many readers who don't care and who just want to deal with the effects quickly, this can waste time.

So I thought about this option in the case study. You open a project and have an option depending on how much detail you want to know about it. If you don't want to select anything, a short version is already loaded.

What are the disadvantages of this idea? Why shouldn't I do that?
As far as I know, it could get unnecessarily complicated and people who don't care just flick through the long case study anyway.

What do you think about it?
This is a short wireframe to show the idea: 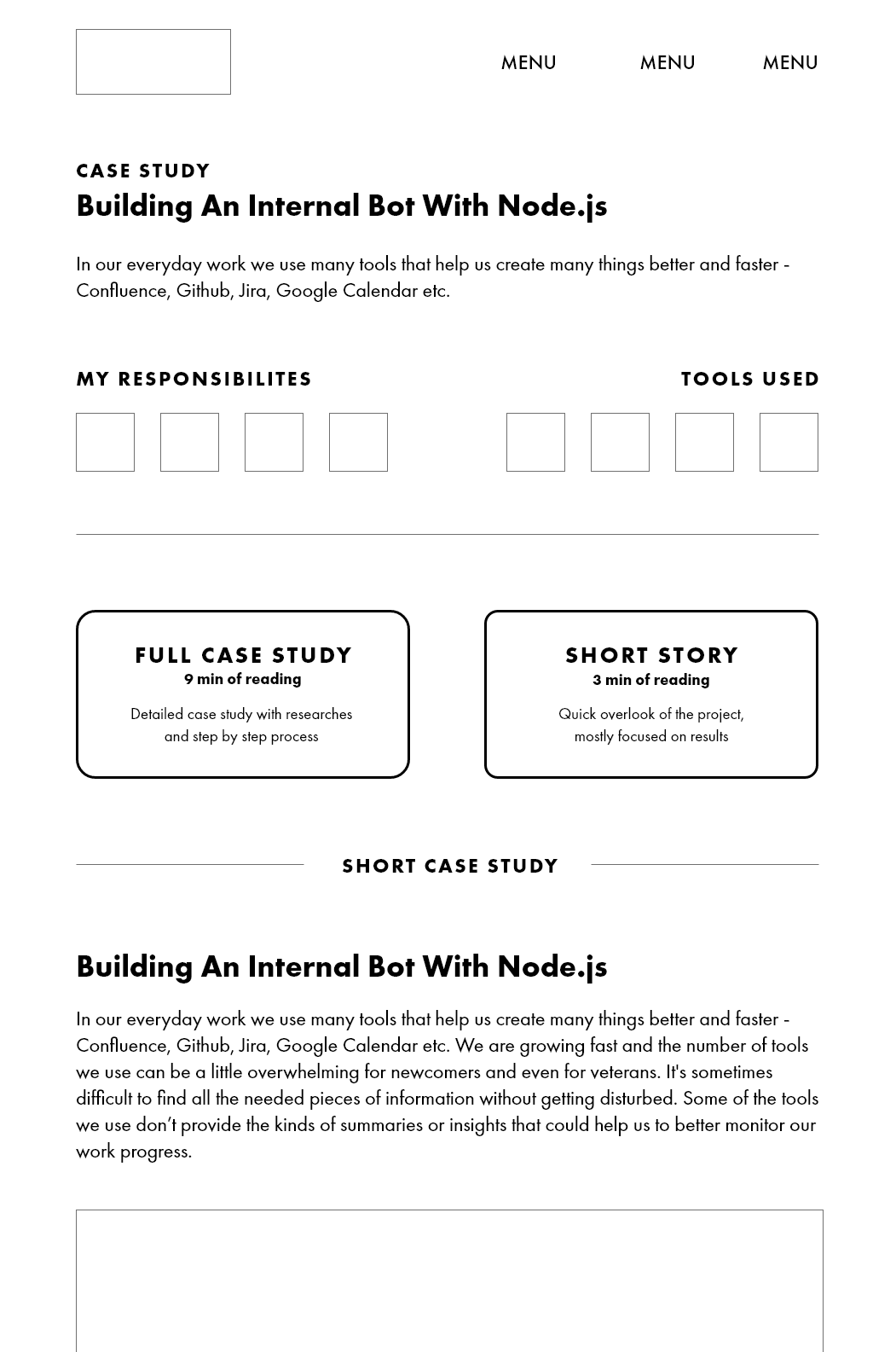 I'm new here, so if this is the wrong place to post this, forgive me.

I thought I would quickly go through my little "success story". I started a blog in January of this year (can I post links? If so, I will do it later). I just set up the website with content for about two months. Then I came across DigitalPoint and started hearing about the great success people had with AdSense. So I thought I would give it a try.

During the entire months of January and February I (obviously) didn't do anything. Then I created a second blog in March (I'll post the link later if I have permission) and placed it on both ads. In that first month of March I did $ 1.04! I was thrilled to see that I could actually make money just to get clicks!

I worked more at both locations and did an incredible job in April $ 3.52! I was so happy to see that my websites improved and I made money! May continued to increase and I did $ 5.84,

It's not a lot of money since some people make hundreds of dollars a day here. But I was so skeptical at first that it was really a way to make money. Those out there wondering if it's true is it! I am so excited to keep working and building more websites to see if I can improve my earnings!

Before I answer, I would ask you as DM; What difference does it make?

What would you change in your game if you knew the players knew Princess Q was a spy? Would PQ change tactics? Would PQ know that players know it? How did she find out because nobody says anything uncharacteristic on the outside?

To me it sounds like you really want to know if your DM skills are interpreted correctly by the players. You say you dropped clues. But since no one says "she's a spy," you're curious to see if you're playing your NPCs properly.

I could be completely wrong, but that's what I think about first.

With that in mind, it's best to ask players about ALL NPCs in general.

Don't say, "So what do you think of NPC X?" Ask for more global feedback, such as, "I tried adding a background story to some of the people you meet so they are not so two-dimensional. Does that matter?"

If they say they can say it, ask for examples. Someone will likely report for PQ and you can go from there.

I ask for this kind of feedback all the time. In a session I held a few months ago, I gave them a few notes / sketches from the local scholar about how to solve the puzzles in the dungeon they wanted to explore. I made some clear, some more subtle, and a few unrelated drawings. After it was all over, I asked how and if the notes had helped. Most were found out, some made no sense until I told them, and even some of the "wrong" notes became part of the adventure as they tried new things.

Ultimately, this feedback helps me shape future meetings because I know what they're paying attention to.

Just ask for feedback about the adventure, especially about the NPCs, and see what they have to say.

All details can be found at http://www.forex-portal.com

The funds go to a large Swiss bank. Now you can
Start 2020 with this proven investment.
Just contact me using the contact form for details.