How can i configure my virtual server in F5 to acheive this communication?

In my configuration i have

Here is an image, the device tries to communicate with balancer but doesnt work

I am rewriting an old asp.net 4.0 web forms website that exposes an application’s data and logic to the web. I am moving this to a .net core mvc or razor page project. The website has minimal formatting logic and some take-input-and-return-data logic. I am not using his logic because he essentially wrote a procedural, non-OOP version.

I am a little ways into a Razor Pages project right now but am finding myself writing awkward code. My issue is all this data comes from a server socket listener that uses TCP/IP protocol to return xml-like text data.

This is great except the person who wrote the listener (cannot change and have 0 control over it) made it act like a pseudo web api. It is listening on a specific port and ip address. However, It closes the connection after he finishes responding to every request and the only security is relying on the connection coming from specific hosts/servers. So creating an SPA (ideal) is out of the question because I can’t connect from the client.

Therefore, all data and model creation has to be done on the server. I could wrap an actual api around the tcp listener but that is for another day. Let’s assume this TCP conundrum will not change. How do I best go about this?

I currently am injecting an IDataSource class into the pagemodels. I am then defining “models” that essentially define what data the pagemodel needs those models to have in order to function. I then implement the IDataSource in a class that knows about the tcp connection, call the listener, parse the xml, and return the “model” class as if it was a real repository.

Is there a better way to do this? I am trying to maintain SOC but the data coming back and what is displayed is so interconnected I am almost wondering if I should try another way. I was considering possibly switching to MVC and just have the controller know about the tcp connection and having it call the server, parse the data, and then create a viewmodel and return a view. Or at least injecting those functionalities into the controller while still letting the controller know about the data source.

This would be quicker and make for less awkward proxy classes for the data. Instead, the controller is the application and only shapes the data for different views. Not traditional, but this situation is a bit different.

I have two PCs. There is SQL Express installed on one of them.
TCP/IP settins are here: 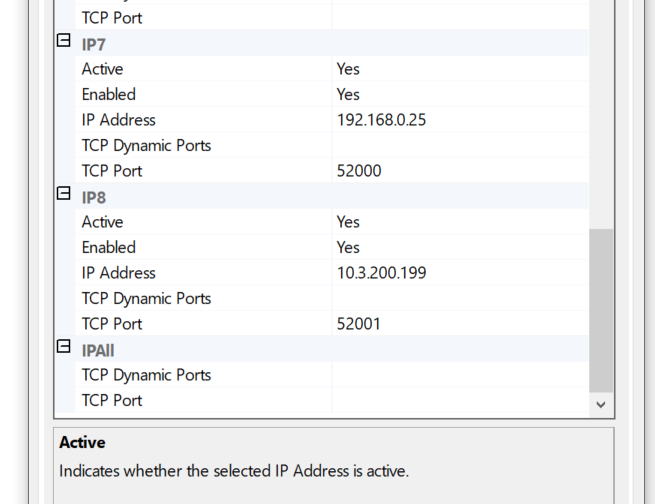 When I perform Test-NetConnection on local computer I get

But when I do it from remote PC I get 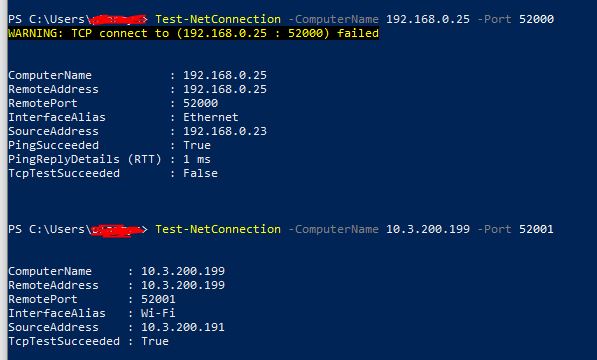 As you can see tcp succeeds when connected over WiFi but fails over Ethernet. Ping is OK but TCP/IP connection fails.
I’d be grateful for any suggestions

I’d like to know if some measure is possible to prevent the capturing of packets that are being sent on Android.

I’d need the solution to work via code (cannot rely on external tools).

Packets are already encrypted, but it would be a nice plus if they couldn’t be captured, or, at least, that it would be difficult to.

Is anything like this possible or is there no way to prevent capture of a packet via packet capture software?

I’m having a hard time trying to reach to higher levels of requests per second and am looking to understand what factors would limit the performance so I can make a decision if I want to invest in that (hardware or software changes).

Using the guides I can find online, I can get around 50,000 to 80,000 requests per second for a trivial static request on my system on localhost, with defaults, the results are 10 times slower. This is pretty good, but it seems low compared to what techempower.com benchmarks are showing. How can they be saying there are servers that can be 50 times faster on the same hardware? I don’t get those results when I test some of them. It seems like the systems I’m testing have bottlenecks outside the process which I don’t know how to tune or that the network card speed is more important then everything else.

This seems to be the most important change, and I did the equivalent changes in windows registry to help performance. It allows use of many more ports.

I also changed ulimit -n 16384
There are several other settings I tried that don’t seem to help as much.

Is it possible to somehow use even more ports then that on the same system with separate IP addresses? I was not able to prove this to be a benefit with virtualbox, but maybe it is true in a dedicated server with multiple NICs? I understand the throughput will be higher, but I’m not sure if it will have the effect of “doubling” or “tripling” the requests per second with 2 or 3 NICs, or if this is more of an operating system limit.

My realistic C++ application has been optimized and can process up to 2 million internal requests per second, and I’m trying to find the most efficient way to handle the network part so that I can be as direct as possible and preserve as much of the speed as possible. If I just attach the application to Nginx, it will slow down to the 80,000 requests per second or lower which is still good, but I’ve been trying to optimize each area and I don’t know if I need to settle for that or dive deeper. I’d like to hold on to as much performance as possible even if I have to implement the socket communications myself. If I can’t verify a faster setup is possible, I don’t really want to try to implement the socket since relying on other people figuring out HTTP 2 and TLS stuff is better to me.

I’ve been configuring and benchmarking nginx, openlitespeed, libreactor, Java AsynchronousServerSocketChannel and I get nearly the same “best case” results on each one, once they are optimized. The result I was expecting was that they would be much different speeds and closer to the relationship they have in the techempower benchmarks, but it seems like the operating system or hardware is limiting them all.

I’ve been testing on several systems I have access to. Windows, Ubuntu in virtualbox, Ubuntu with Xeon Gold cpu in a dedicated server and digitalocean droplet with just 2 shared cpus. None of them have 10Gbe, I think they are all 1Gbe. They all have similar results. I think my Xeon Gold in Linux would be the best, but I’ve never seen any benchmark on these systems get anywhere close to what is being shown on these techempower.com web server benchmarks.

I’m also not sure if the network card speed is a factor for localhost performance, but I usually test localhost without TLS to see the fastest possible result. I’ve used multiple instances of ab or just one instance of wrk for testing, and generally 100 to 200 concurrency has the best result.

Are higher speeds mainly a factor of the network card, or is there more configuration I can do? I’m currently using systems with 1Gbe connections because that was practical and enough. Where would I get the most improvement. Network card, CPU, some system configurations, something else?


network – What Are These Adapter TCP/IP Settings For? – Information Security Stack Exchange

What are those settings for, and which options would be the best for security? 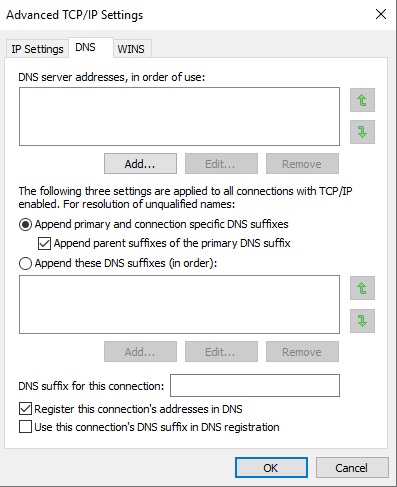 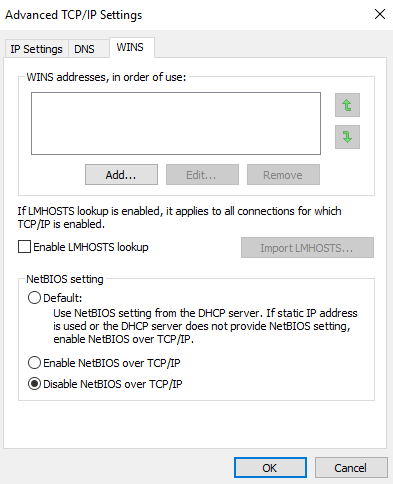 Quvok is a new contributor to this site. Take care in asking for clarification, commenting, and answering.
Check out our Code of Conduct.


I’ve been looking for information on how the network created by an Android device’s mobile hotspot is isolated (or not) from applications running on the device providing the hotspot.

The question is whether an application running on the device should be able to connect to/discover a TCP/IP service that is running on a device connected to its hotspot. Can anyone point me to documentation on how the hotspot network is or is not bridged the wifi network that apps on the device use?

If I connect the other device to the mobile hotspot provided by the Android device and then I attempt to discover a service running on the other device it fails. I assume this is by design, but can’t find any documentation to clearly articulate what if any connectivity exists between the network the application can reach and the hotspot network.

I believe this scenario is better suited for WIFI direct but the other device does not support the protocol. If the WLAN network were bridged to the hotspot network it would work around this, but I don’t believe it is just want to confirm before I rule this out.

My Mac is connected via Ethernet to a router (with internet access through corporate VPN) and to home WiFi where all my devices live in.

So I want my Mac to get all TCP/IP settings for home WiFi via DHCP, but to not use default gateway for this connection at all.

Is it possible to ignore or override the gateway setting obtained from DHCP? I know I can specify my own DNS servers, but what about the gateway? I cannot find such option in the Network pane. Maybe there is some CLI way to do it?

This is a bit of an unusual question but I have a Mac server that gets hit with a lot of DDoS attacks. Usually my data center’s mitigation system catches them but sometimes they slip through. When they do, they often can completely kill my system’s TCP/IP. Even accessing localhost does not work. TCP/IP is completely dead. But the system is not frozen. It still runs perfectly fine otherwise. I know this because once I reboot the system, I can see all of the log entries from my scripts from the entire time it was offline. I have screen shots of the desktop from when it was offline.

Rebooting the server in this state returns it to normal. But I’m hoping there’s some way I can restart just the TCPIP stack without rebooting the whole OS? That would at least let me regain access to the machine in a way that, while clumsy, would be significantly less so than hard remote reboots via IPMI.

This is all just a band-aide while we work out ways to shore up the DDoS mitigation. But it would be a good band-aide. Also useful, and along similar lines, would be a way to hard flush ALL TCP connections, established, half open, everything including all state information.