I’m developing a VR game using OpenXR in Unity (specifically developing on a Valve Index). When I try to access the input devices through the InputDevices.GetDevices() function, I get 0 devices back when I call this function from my script’s Awake() or Start() methods. But when I call the same function from my script’s Update() method, I see all the devices (e.g. head set, left controller, right controller).

Why can’t I see the devices in the Awake() or Start() methods?

I tried to make projectile for a Spaceship for 3D game. But whenever I instanitate an projectile and make it move, ıt falls . I assume because of rigidbody but couldn’t find how to fix. I want projectile to move forward and not fall.

Those are components of projectile 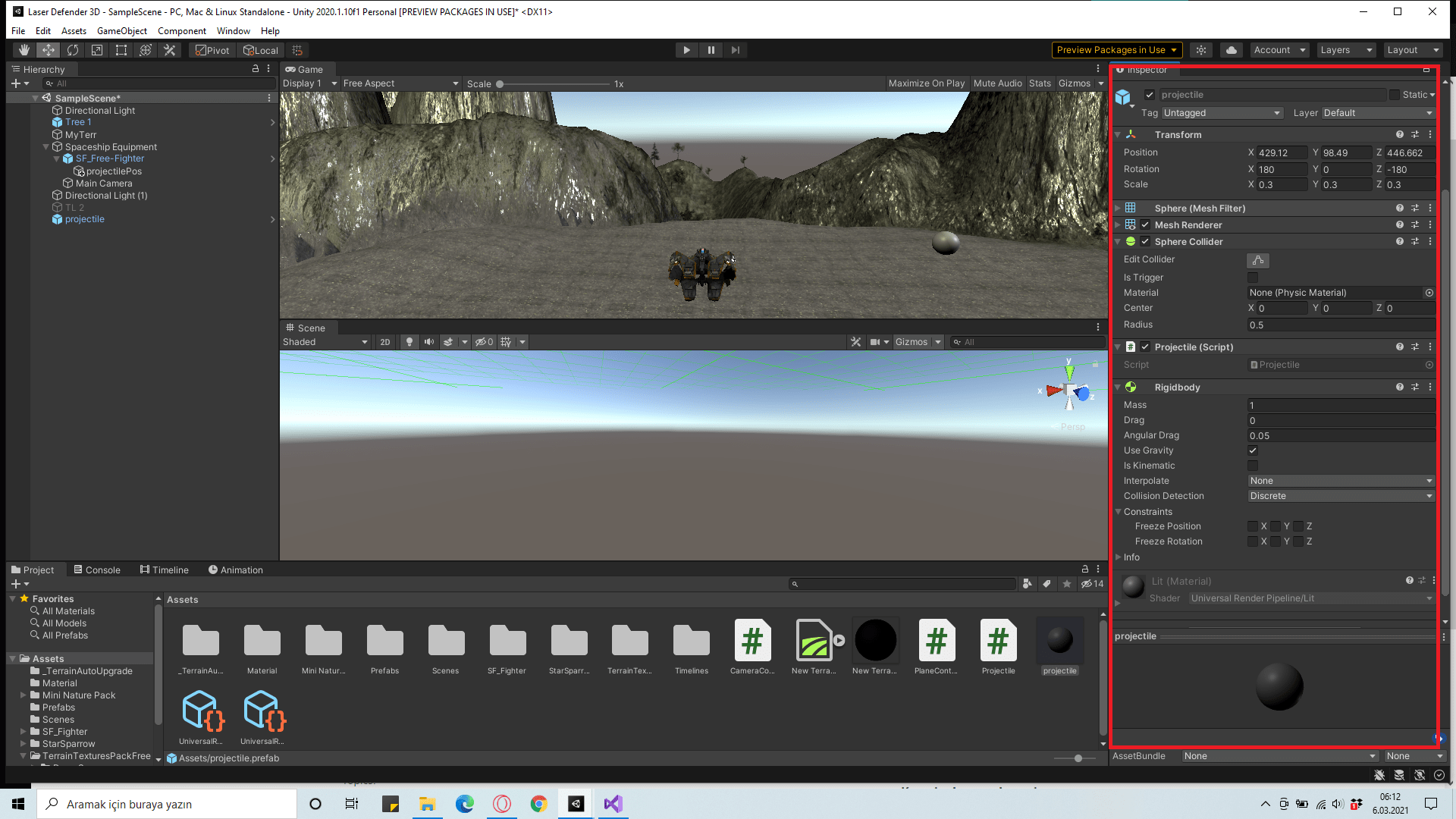 Those are codes I used to keep projectile from falling.

This is the editor script is in the Assets/Editor

And the mono script for example this script is attached to a simple 3d cube :

but there is nothing around the cube. not also near it nothing.
it should draw arch in the editor.

Later I want to be able to use the mouse with a click down and drag to be able to change the arc size but for not it’s not drawing any arc.

I took the example from the unity official docs :

I noticed now also for example that I don’t see the gui button in the inspector of the object that the mono script is attached to :

not sure what’s wrong with the editor script.

This is working. I still wonder why the unity docs example didn’t work but this is working and I don’t need the editor script. The problem with this script is that I must to turn on the Gizmos in the editor and I don’t want to make it turned on all the time. So it’s working but not as I wanted.

I want to draw the arc without the gizmos.

I have 3 objects in my Unity scene:

When stopBuilding() is invoked by the button click, everything works as expected, both Debug.Log() calls print the correct actionableModel. However, when the method is invoked via the Actionable script, the second log Debug.Log(this.actionableModel) prints null (even though this object is still Planet for some reason). Since the first log Debug.Log(planet.actionableModel) still prints the correct value, I assume this is not a problem with the actual value of the property. (I have only a single “Planet” object)

From my experience outside C# and Unity, in which I have only humble experience, I would assume that the context here is improper and that I would need to pass it when I am invoking the method. There seems to be no way to do that though in UnityEvent object.

How can I invoke the UnityEvent callback in the same way as Button does, such that I have access to actionableModel in stopBuilding?

In my inventory system I want that items can be dragged and dropped into inventory slots. I managed to make it work but only in a weird way. So when the player starts dragging it picks up the item and it follows the mouse’s position. When he realeses the button outside the inventory it’s position is restored to the slot where he picked it up from. The problem is that when he drops it on a possible inventory slot it does the same because the mouse is top on the item and the slot as well but the item is rendered above everything else. How can I make the dragging ignore the item itself?

EDIT: Finally found a solution with the Canvas’ Graphic Raycaster Component. This is the solution if anyone interested:

As the title says, I am learning VFX graph in Unity and I am curious where I should place "Set ... over Life", for example "Set Color over Life" which adjust the color based on the particle’s age.

When we create a new visual effect graph, they are placed in the Output context by default, which kind of seems odd to me, since it seems more like a Update function?
It also works if I place it in the Update context, but I am afraid that I probably mess with the performance if the block should not be placed there for some reason.
Also, why can’t I set it in the Initialize context – if I do, no changes over time are applied.

Probably someone could point me to the right documentation or some explanation for this, thanks.
In general, it would be nice to have a documentation that states which blocks should be used within which context (Initialize, Update, Output).

I’ve had this issue many a time, unfortunately anything I’ve used to fix it before doesn’t work. So, if I build and run the app, it will run the app for about 5 seconds, before crashing. If I install the apk and try and run it, it will crash immediately.

I cannot for the life of me figure out what’s wrong, this is an app I’ve built with no issues a hundred times, I am pretty certain I never changed any player settings since then, I did, however, reinstall the unity version as I had an issue with the android SDK because it didn’t install properly.

I ran logcat in the Android Studio, and the only errors of note I could find are invalid vkGetInstanceProcAdd and Connecting to host time out, player connection will be disabled?
However, it does seem to initialize the app through Android studio.

Here is a pastebin of my logcat, filtered to only include unity related issues.

You’re moving the object using Vector3.Lerp(). When you move with linear interpolation (lerp), the speed is constant. To add speed up at the beginning or slow down at the end, you’d need to use easing.

Ironically the source you obtained this code from seems to have left a comment referencing easing but then forgotten to actually include the easing section.

There are many ways to implement easing. One way is to use easing functions. You can search the web to find free libraries of easing functions for Unity. You’d generally use them something like this:

Another solution is to use an Animation Curve. With this approach, you’d declare a curve field at the top of your script:

This will show a curve field in the Inspector. We’ll use this curve to define the interpolated motion of our GameObject. Start with something like this (note that the curve should start at (0,0) and end at (1,1): 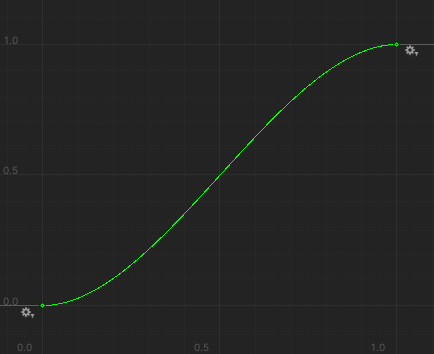 Then we’ll use the curve in our movement coroutine:

If the curve was a perfectly straight line from (0,0) to (1,1) the output would be linear (in fact, it would be exactly the same value as the input). However, this s-shaped curve will ease the motion in at the beginning and ease it out at the end. The flatter the curve is in a particular area, the slower our motion will be at that time.

If you find this confusing, try messing around with the shape of the curve and study how this affects the animation.

Easing functions usually are easier to use. If there’s a specific style of easing that you want, you would just call the appropriate function. Animation curves take a little more work to set up but give you more control over the exact motion.

so here the the script:

note: on the ShowDescription(int id) i want to show item information what same as i picked up i have mentioned it above.

I have written a simple c# class that is supposed to change the color of the Player Renderer.
But, there seems to be a problem! whenever I call the function OnCallFun() … the color stays put and does not change.
I have looked into the solution for quite some time now but no hope.
does anyone have a solution? 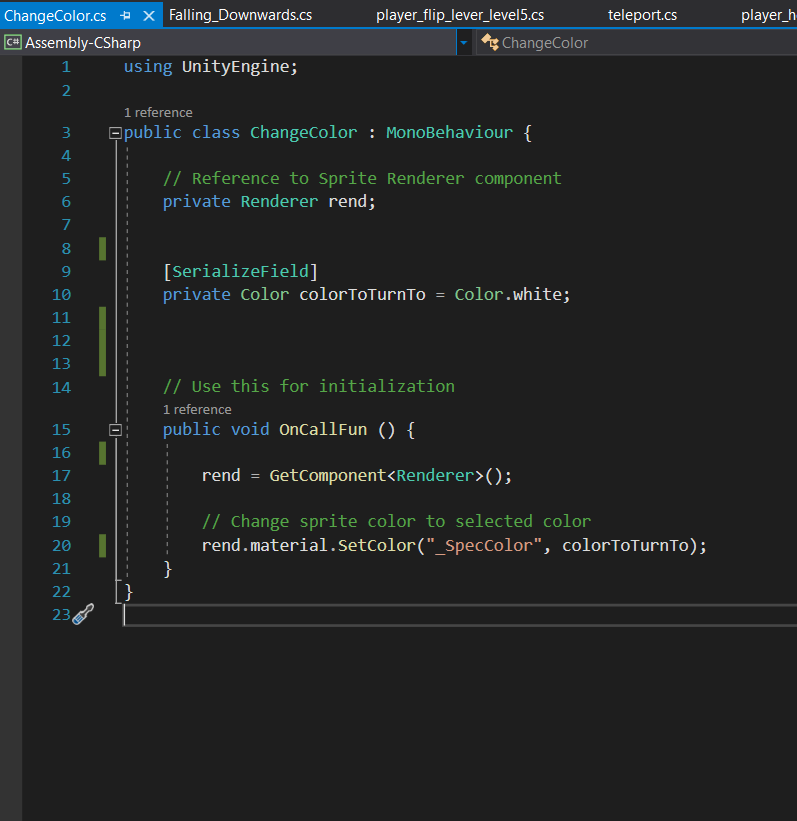 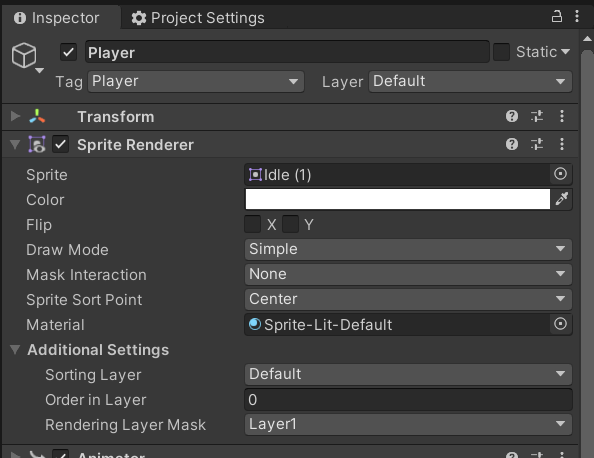