I have been having a problem with my built-in camera and i start to think that maybe its a usb port issue..

I think, maybe, 4 years ago i disabled on windows the usb port of my camera… I dont remember for sure if and what i did. but maybe i did it in the interface of windows.

Currently on my computer i have only Ubuntu 20.04.

I have a few questions:

I’ve had this issue since 4 years, so i got to google it quite a lot. I tried all the Ubuntu answers, and nothing worked, but there were a few cases where getting the camera to work on windows solved the problem on Ubuntu as well, and a few where turning back on the usb port required windows..
following these clues:

Thank a lot for any answers :]

Every so often, the mouse cursor will stop responding to mouse movements, mouseclicks don’t register with the system. It seems that the mouse movements/clicks are being buffered to some extent because they eventually register, at least sometimes.

This is with any of several USB mice (Microsoft, Logitech) with the mouse dongle plugged into various ports, front and back and even a powered hub. Same mice work OK on other computers. I’ve noticed no issues with other USB devices on this PC.

When the problem arises, I usually check the process list in TaskMan and never see anything unusual; CPU < 8% or so, no other resources getting pounded. And it seems that the problem often self-corrects when I start TaskMan. A delusion, perhaps.

As a test and out of pure frustration, I just plugged in a wired mouse and (so far) haven’t experienced any issues. I’ll live with it if I must; beats using the PC for a boat anchor, esp. as I don’t have a boat.

I have a Z170-K mobo and yesterday I updated the BIOS to the latest (2018) version of the bios, and usb 3.0 devices are not recognized, and in windows 10 I can’t shut down the PC, Windows does it but not the PC completely.
So I reset the CMOS and went in the bios, Advanced > USB Configuration and in USB devices and the XHCI controllers were listed, and also the devices connected to these ports, but I couldn’t use them.
There is no XHCI handoff option so i don’t know what i can do.
I also tried to update the drivers but it didn’t work.
This is what I see in the USB configuration settings

I want to record both screen and audio from iOS device using my MacBook, so I connected the device to my computer using cable. I then opened QuickTime Player, click “File -> New Movie Recording”, and select the iOS device as video and audio input from the drop down menu next to the record button, and everything works fine.

I then tried OBS as QuickTime is not very flexible. The video is available in “video capture device”, but the audio cannot be found anywhere. After a bit research, I found audio input can be enabled using “Audio MIDI Setup”. However, with OBS opened, the audio device immediately became disabled about a second after I click “Enable” in the Audio MIDI Setup. When I close the OBS (or remove the video input from the iOS device), however, the audio input in the MIDI setup works, and I can record audio in OBS via “audio input capture”.

The frustrating thing is that I cannot record both in OBS, it seems like iOS device can only operate in 1 of the 2 modes that provides either video (screen cast) or audio via USB, but not both. But how does QuickTime works? The audio input option from iOS device is in the QuickTime even when the device is not enabled in Audio MIDI Setup (and when enabled, the device is listed twice with slightly different names). This seems like QuickTime use a different mechanism to grab the audio input from iOS device, and I am not aware of any other applications can do this.

The workaround I found is to record the main speaker output (using SoundFlower or other similar tools) since QuickTime will output the audio from iOS device to main speaker of my MacBook. However, the setup is quite complicated and not very flexible (included below).

Any better ways to do this?

Appendix (how to use SoundFlower to workaround this)

I want to try to install Linux with phosh on a old x86 HP tablet but to get Linux to boot I need to copy a weird bootia32.efi file to /boot/efi before it will boot don’t ask me why a x86_64 system needs a ia_32 .efi file I honesty don’t know.. I was able to do it with rufus when I used windows but with dd or gnome-disk the USB drive is not writable when I flash it

here is where I got the bootia32.efi file form https://github.com/jfwells/linux-asus-t100ta/tree/master/boot it’s for a different tablet but it worked on my HP stream 7 since it’s the same issue to due with some wack intel chip I guess

I want to flash a different version of a system.img and normally this would be done with fastboot via USB but the device I am trying to do this to I cant use adb/fastboot over USB and I have to use adb over Ethernet instead. Once I reboot into the bootloader to try to use fastboot it obviously wont see the device since I use Ethernet so is there a way to just flash the new system.img file without fastboot?

Device has an sdcard slot, is there a way to use that?

Also note I dont have any of the other image files (boot,recovery,etc…) so I wont be able to create a zip file

I am trying to download data from a USB based device remotely. i.e. Using a WiFi dongle or 3G/4G & LTE Base HAT with a Raspberry Pi 3 or 4.

Am I able to install a driver for a WiFi dongle or 3G/4G & LTE Base HAT on an android based Raspberry Pi?

I want to transfer data from my mobile phone to my external USB hard disk.
The data stored in mobile is approximately 60Gb.
But during the transfer I get error the device is not ready. 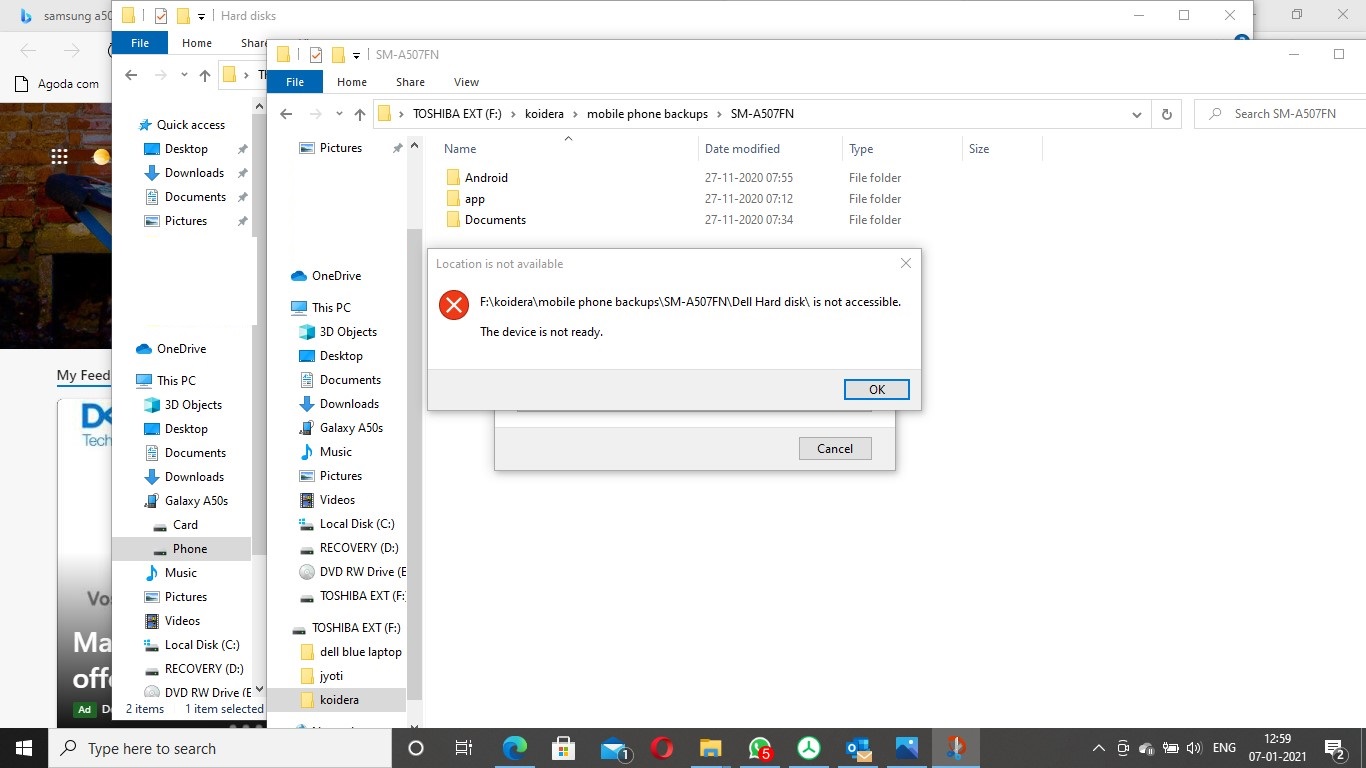 However the Samsung A50s mobile phone is connected and from computer
I am able to access the folders. 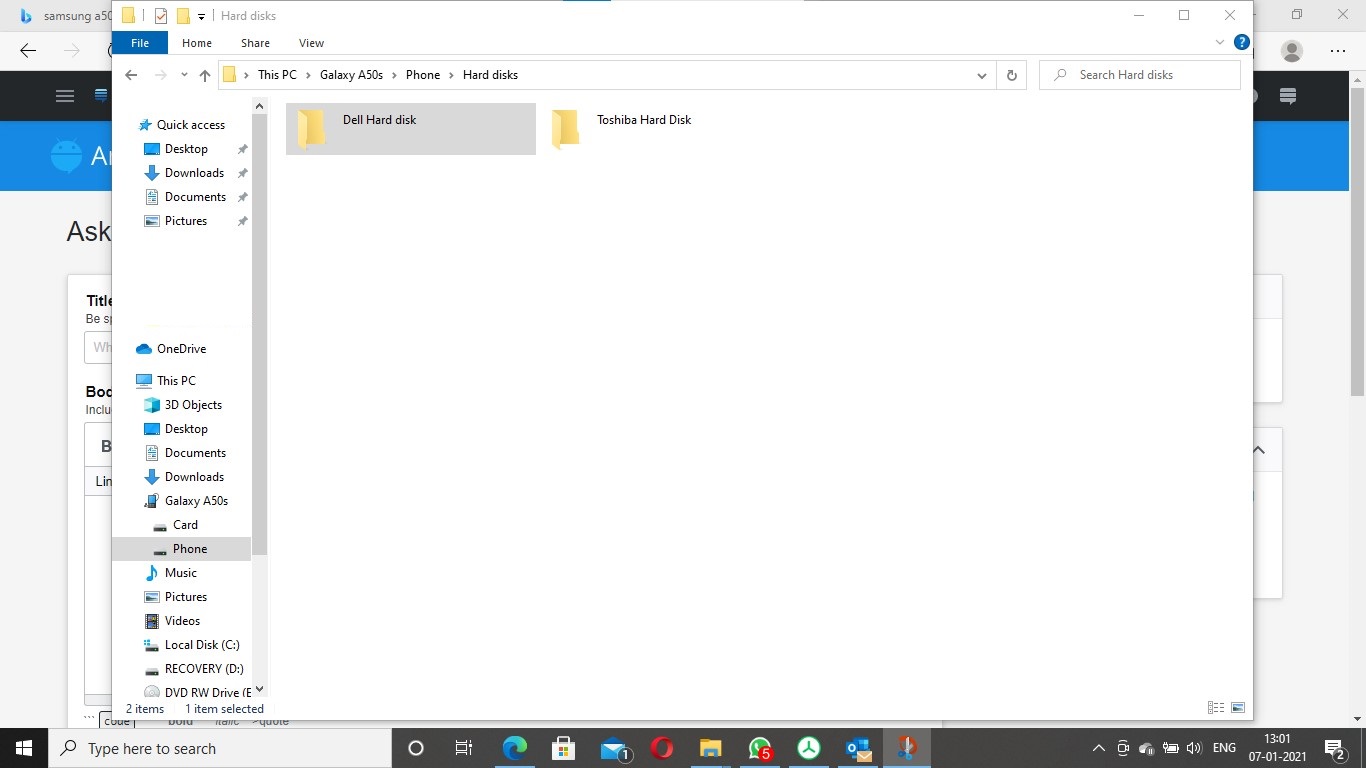 I am not able to understand how can I transfer mobile phone content to USB hard disk in this case.

I want to get a USB <> HDMI device working but I need some help converting the DisplayLink rule to work with a generic vendor (same chipset).

This question was migrated from Information Security Stack Exchange because it can be answered on Super User.
Migrated 1 hour ago.


I am a person that is constantly on the move. Therefore, I usually carry USB sticks with operating systems that I can easily run without leaving any trace on the host system. Usually, I just run Linux from these USBs, which is great because the data is not persistent and is wiped as soon as you turn the computer off.

However, I have tried to replicate the same thing with Windows. But, the live windows session is persisting after a reboot. All the data from the previous session doesn’t get wiped like it usually does with Linux.

This has got me thinking. Where exactly is the data for this session being stored? Is it being stored on the USB stick? Or is it being stored somewhere on the HDD/SSD and can be potentially recovered by a person/entity tech savvy enough?

Likewise for Linux. Although the data is wiped after a reboot, is it completely wiped? Could the data be getting stored somewhere on the HDD/SSD?