An application bundle that includes a nginx, MariaDB, some app logic, and maybe Redis. OS would be FreeBSD or Fedora Server.

Does it confer any benefit to spin up several redundant VMs, each containing the full bundle, vs. just running one instance of the bundle on bare metal with no virtualization?

Would you predict any difference in networking performance or throughput? Does sharing the NICs among several VMs boost capacity at all? I mean some kind of SR-IOV hardware virtualization or similar. Can a NIC handle more connections if it’s virtualized?

Is it better to just have one instance of the app exploit and control the hardware directly?

(Assume same OS as host and guest in the virtualization case. I guess using KVM with Fedora.)

Integrated graphics is enabled, though there doesn’t seem to be an option to choose between the iGPU and dGPU when booting in the BIOS, so it always uses the latter until Proxmox is loaded. Requisite virtualization options are enabled (VT-d, etc.).

I followed this guide for configuring Proxmox and the VM, but here are the important bits:

Task Manager correctly reports i7-2600 as the CPU, but can detect that it is in a VM (Virtual machine: Yes)

I used 352.84-desktop-win10-64bit-international-whql.exe as the driver, directly downloaded from Nvidia’s website.

GPU reports Code 43 in Device Manager, and there is no output on the attached monitor.

Please do not hesitate to ask for any more needed information. Any help is greatly appreciated! 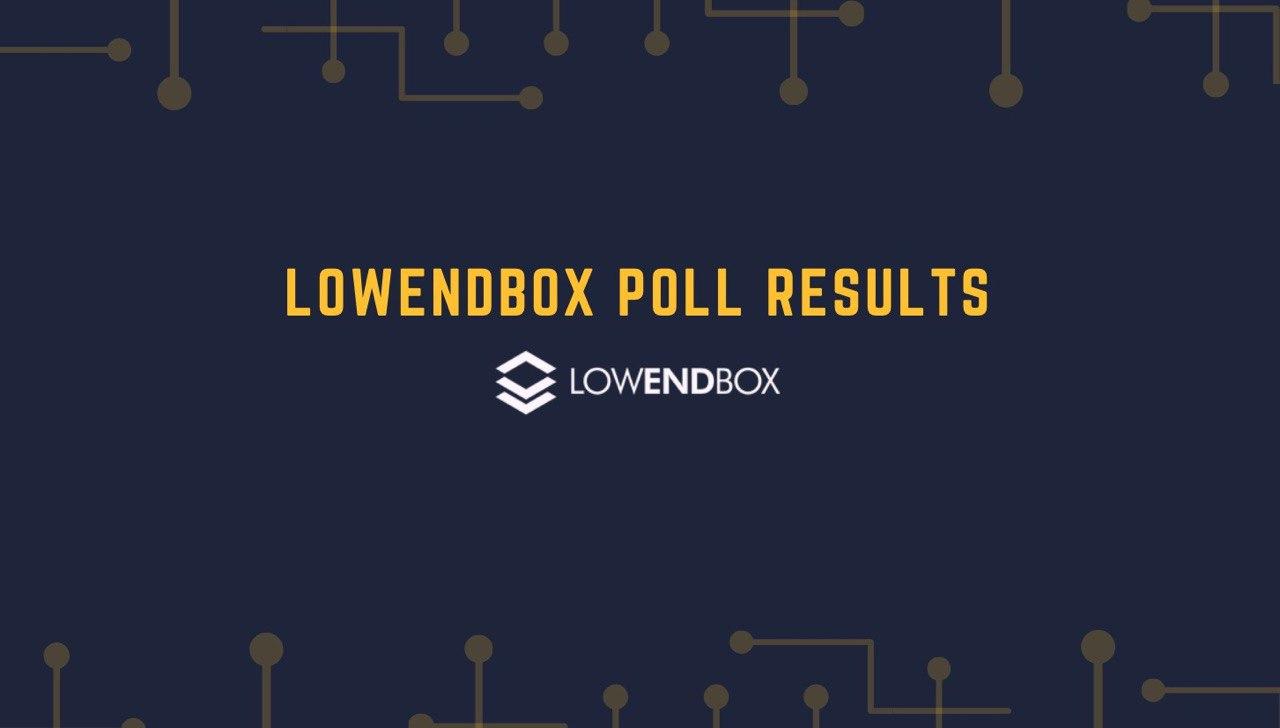 On May 15th we asked our users to tell us which virtualization engine they most preferred as the basis of their cheap VPS hosting plans.  After 9 days of voting and 327 unique votes, the answer is in, and the community has decidedly voted in favor of KVM virtualization.

While voting will remain open we grabbed the results as of May 24th (after 9 days of voting and 327 votes).

Recently we’ve published a number of guides about different virtualization technologies, including KVM, Xen and OpenVZ. If you are not familiar with the differences you can start by reading a broad description of the three and then continue to learn more about KVM Virtualization followed by OpenVZ Virtualization.

Check out the results below: 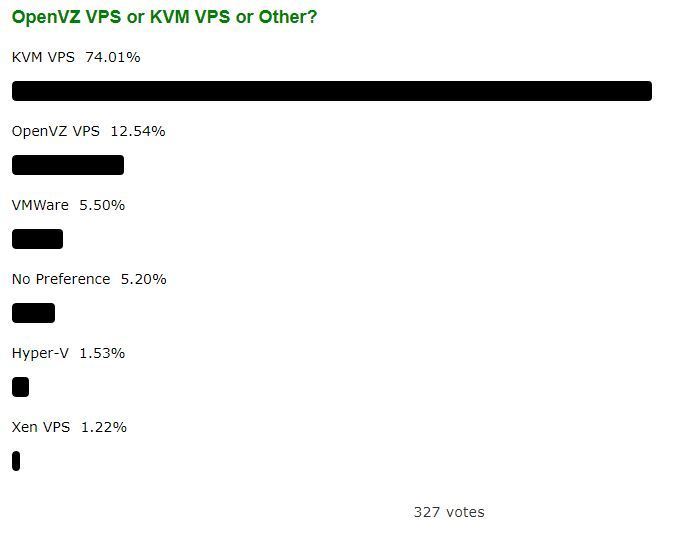 While it is not surprising that KVM Virtualization was the preferred hypervisor engine according to our users, what is surprising is the extent to which it led other options, including OpenVZ and Xen. Both VMWare and Hyper-V tend to be more on the enterprise side of the game, but even still, they both beat Xen. While the whole “low end box” era of cheap VPS hosting started with OpenVZ it is clear that the transition to dedicated resources and enhanced security/neighbor protections offered by KVM is well under way. A few year ago a 2GB RAM OpenVZ VPS was very exciting — even though it would have likely been RAM oversold many times over. Today, there are no shortage of great deals available on inexpensive KVM based VPS options, many of which now offer RAM allocations in excess of 2GB for less than $10/month.

If you are shopping for a cheap KVM based VPS, check out the latest offers on LowEndBox.

There are plenty of great OpenVZ VPS offers still available, too, should you prefer it.

Thanks to everyone who took a moment to vote and share their opinion on our Preferred Virtualization Engine Poll!

Poll: What do you use your VPS for?

The idea of having a fast, disposable VM at the palm of my hand appeals to me very much. It makes adding an extra layer of security to any thing I want to do so easy – just launch the sandbox application in a matter of seconds and you’re done. Of course, that is considering the VM actually does the job it’s supposed to do…

A little disclaimer beforehand – I’ve read the article Beware the perils of Windows Sandbox at Magnitude8, describing how the Windows Sandbox comes with a NAT pre-enabled and thus any malware running on the guest would still get a direct access to your intranet, which is already a large problem. But for the purpose of this question, let us just consider the host-guest scenarios.

Windows Sandbox claims to “achieve a combination of security, density, and performance that isn’t available in traditional VMs”, by leveraging a different approach to memory and disk management. If I understand things correctly, everything that in theory can be safely shared between the host and the guest, gets shared. According to the official documentation, the Sandbox shares both the host’s immutable system files, as well as the physical memory pages.

Despite that, Microsoft seems to remain confident that their solution is secure as implied by one of bullet points mentioned in the Sandbox overview:

Secure: Uses hardware-based virtualization for kernel isolation. It relies on the Microsoft hypervisor to run a separate kernel that isolates Windows Sandbox from the host.

This obviously raises a lot of questions, because at the first glance, all this resource sharing should increase the attack surface greatly, leaving more space for exploits to be found. Also, even the most sophisticated technology, which changes only the implementation and not the design, does ultimately make the discovery of an exploit only more time and resource consuming, but not less possible, doesn’t it?

So, my question is

Would you consider Windows Sandbox to be a viable alternative to conventional VM solutions in terms of security, or do the shortcuts used to achieve the performance undermine the VM’s core principles too much? Or am I just not understanding the technology and all of what the Sandbox is doing is technically safe?

An extra question: Does the situation change when we’re talking about a web-based attack, such as opening a malicious site in a browser from within the Sandbox, or does it come down to the same situation as running an infected executable? (disregarding the extra layer of sandboxing done in the browser itself)

I have a host system (Windows 10) with premium antivirus and running a Windows 7 in Virtualbox with no antivirus. I have installed sandboxie and try to run executable files that may contain virus. Is it safe to run those applications? and what will be the effect if the virus slips out. I know this is a dumb question even after knowing about sanboxie. But I would like to know the consequences that occur.

Also, I would like to know how it affects the host machine if I run that exe file without sandboxie on Virtualbox.

Since there are many viruses and trojans that silently triggers even without running the exe file. Just want to learn the consequences that virus can damage. (P.S that I still having the antivirus on on the host machine).

I don’t want a storage pool of any kind. I simply want to move from the dual-boot I have now (arch linux and windows) to running the two OS simultaneously. I intend to provision two physical disk partitions on the host to be disks on the guest, and I can do this via the xml that defines the domain.

Or am i required to have a storage pool no matter what?

I am trying to find a driver for Windows 7/8/10 to use the display driver "vmvga" with QEMU + KVM.

This driver is available by default for Linux and VmsVGA2 is available for OSX. But where can I find the right driver for Windows and QEMU 2.11.1 (included in Ubuntu 18.04)?

If I now specify vmvga in libvirt, Windows uses the standard display adapter. It is not available in the virtio iso, nor can I find it anywhere on the web.

I'm going to use Virtualizator.

How much VPS can I create without over selling in this dedicated one?
If every vps is 2 GB RAM, 1CPU (50%) runs with Ubuntu.
And what else should I know so as not to fail?