I’m trying to repurpose a Win10 business laptop from a large organization. A friend was gifted it when she was layed off but it was as is. I removed it from their network, unraveled their security measures, etc. But there is one thing left that I cannot seem to find.

Whenever I plug in a USB storage device I get a pop-up saying that I cannot use that device until it is approved by their organization and then encrypted. This happens even in Safe Mode. The only logo on the pop-up is the name of the organization that gave me the laptop (which is not a SW company). Here’s what I’ve done to try to find out who this is: 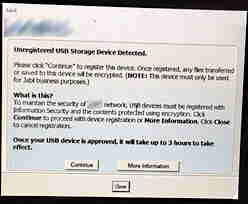 Does anyone recognize this kind of pop-up or have any good guesses as to who it may belong to? Does anyone have any suggestions beyond what I’ve already tried that may give me a clue as to who is doing this?

I’ll reference an earlier question that I asked about ID-ing pop-ups. But that answer did not work for me so now I’m asking if anyone can help me using any strategy at all.